Q1: What are some of your favorite character development techniques? #WebComicChat

Start with a single strong/exaggerated personality trait, and build outward. You want a memorable hook for readers, especially with minor characters who may not appear for months at a time. 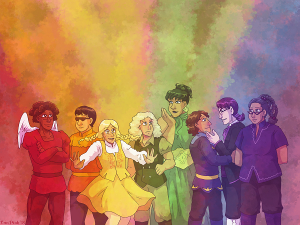 I had fun writing the Leachtric sections of Leif & Thorn because it’s a show-within-a-show. I got to develop the characters as they existed in-universe, then figure out how they’d be fictionalized for a historical drama.

Q2: Who guides your character’s actions? You, the fans, the characters themselves, or the story’s progression? #WebComicChat

I’m a discovery writer. Can’t plan too far ahead in too much detail, because I’m always working out new things along the way. That applies to character actions as much as anything else.

For instance — there are plot points that were conceived with a vague idea of revealing them in But I’m A Cat Person‘s climax, but instead they’ve already happened, because there was no good reason for the characters to keep holding the information back.

Q3: What’s your relationship with your characters? Do they live in your head? Are they based off of real people? Self-inserts? Storytelling artifacts? #WebComicChat

Well, most characters are going to have a little bit of the author in them somewhere.

I wouldn’t make a character just “in-universe counterpart of Person X”, but sometimes real-world details are too good not to include. (When this chat occurred, I was in the middle of drawing Rosie’s recent conversation with Rowan, which was heavily inspired by a real conversation that I couldn’t have made more ridiculous if I tried.)

If you’re going to base comics on reality, though, you have to have distance. When a character is facing a struggle that’s inspired by something you’ve been through, great, but you can’t take it personally if some reader says “wow, this character is being an idiot.”

…there was one time, many moons ago, when I left a comment on another person’s work that effectively said “character X needs to get a clue and realize they’re bi.” Author reacted with fury, because character X’s experiences were based on their own, and they were straight, definitely straight, how very dare I.

Six months later, this same author was bi, definitely bi, and proud of it! …but still mad at me. Never did quite figure that one out.

Q4: Let’s get philosophical! Have you ever thought about why your characters exist? If so, share your reasons. #WebComicChat

Some things are easier/more effective/more fun to express via storytelling than anything else. 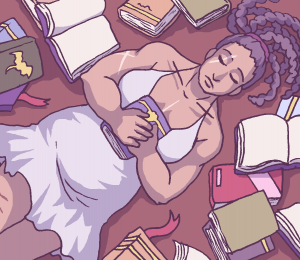 Q5: Are there characters that you hate after you create them? Do you have a favorite brainchild? #WebComicChat

If you develop a character enough to really understand their perspective and motivations, you usually can’t end up hating them. Unless they’re a particular flavor of villain. 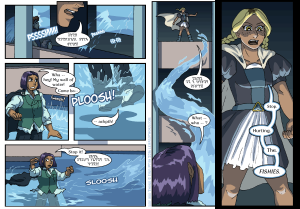 If this is talking about when you hate the process of writing a certain character…why would you keep it up? Unless it’s work-for-hire, there’s absolutely no reason for it.

Q1: Who or what inspired you to make comics, create your own stories, and support creators? #WebComicChat

In terms of the mechanics: the moment I realized “posting comics on the Internet and having people read them” was a thing, it was like a light had been switched on. First read might’ve been Venus Envy.

On a more somber note, a bunch of Leif & Thorn is a reaction to stories that made me sad/mad/upset – usually they took a premise or trope that had a lot of potential, and ruined it in some way – and I wanted to do better. (And fixit fanfiction wasn’t enough.)

Depends on the inspiration. And the reader. Recently got a comment on BICP that was basically “I’ve been reading this for years…and I only Just Now picked up that you put Stephen Colbert expies in everything.”

Sometimes readers pick up on inspiration that isn’t in the order they think it is. Like the person who asked if a plot point in Leif & Thorn was inspired by Steven Universe. Nope — both it and SU are doing the same reference to Utena.

I’ve also been inspired by things in the news, particularly disasters, which means I end up researching them and learning a lot about the real-world background. Even when the in-universe considerations are different (mostly because they can have magic-based solutions).

Q4: Sometimes the line between “inspiration” and “copying” gets blurred. How can someone avoid “copying” and instead be inspired? #WebComicChat 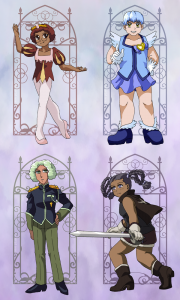 Hey, I was just listening to a DoL epsiode that goes into this.

It’s easy to spot a magical-girl series where the creator’s only inspiration is Sailor Moon. People who have watched/read a bunch of different mahou shoujo come up with fresher, more grounded, more engaging additions to the genre.

Terry Pratchett is the model for doing this right, imo. Discworld riffs on everything — this book is Phantom of the Opera, that one is Macbeth, this one has a whole sequence that’s Mad Max, and so on.

But it’s all set in a fundamentally well-developed world. The characters have rich and complex personalities. There’s a lot happening on the Disc besides direct takeoffs on other stories. The writing is funny and thoughtful.

…also, he makes the most extended references to public-domain works, which I’m sure helps.

Q1: Where do you find inspiration for a new project? Do you actively seek it out, or wait to be affected by something powerful? #WebComicChat

At this point? To start something new, it has to be powerful enough on its own that I’m inspired with no extra effort.

Q2: How do you cultivate the seeds of a new project into something more fully formed? #WebComicChat

Take a bunch of different seeds, plant them all together, watch how they grow around each other. As of this chat, I’m in the middle of “what if magic Hamilton” + “sudden wing growth = medical issues” + “Internet friends are real friends” + “SVU parody.”

Also, doodles! Get a feel for the characters, the props, the setting — and discover which bits you really like, and want to draw more of. 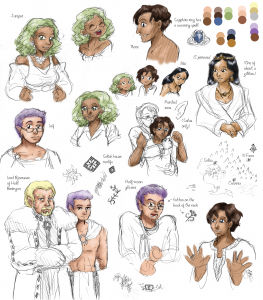 (Early Leif & Thorn development sketching. You can see which details were fully-formed from the start, and which…weren’t.)

Q3: Do you do any kind of research or study as you develop a new project? Tell us about some of your methods! #WebComicChat

Since BICP takes place in present-day Boston (…well, 2010 Boston, which was present-day at the time), I took a bunch of my own reference photos. Here are some of the settings from the early chapters.

And Leif & Thorn needed bunch of geology-type research. It’s easy to say “2 moons, that looks cool,” but then you get to think about “how do those 2-moon tides affect everything from international trade to beachfront property values.” 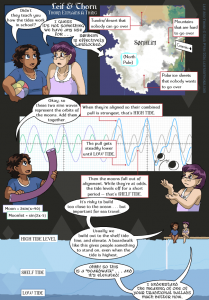 But I can’t think of any resources for “new projects” that aren’t just resources for…projects. Everything from worldbuilding to fashion design is gonna be an ongoing endeavor.

Q5: Want to talk about it? Share a short description of a project you’re working on or want to develop soon! #WebComicChat

I’d been stuck on a while for this Leif & Thorn mini-arc, with some bonding and friendship-building for the goth kids. I had all the plot points, but something was missing – it was coming out like an As You Know Bob speech instead of a character moment.

Then last week I wandered into this little Satanist/metal gift shop, and finally I realized, duh, the kids could be shopping here.

So that’s the most recent thing I finished. Goth kids having character development while poking at all the skulls/etc that I got to poke at IRL.