The Kickstarter to print Volume 2 launches in just a few weeks! 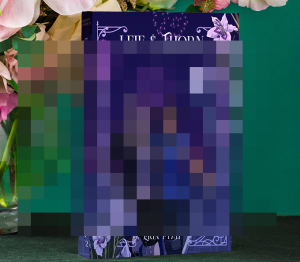 (Patreon supporters have already seen the unblurred version. The rest of you, hang tight.)

I also finished the giant full-cast portrait, as dictated by the Favorite Character Poll!

Here’s what that looks like…so far: 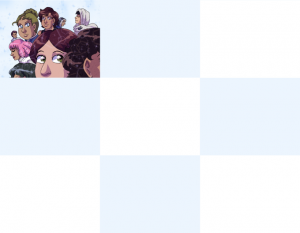 As we hit various Kickstarter milestones, I’ll celebrate by unlocking new pieces, until the full work is unveiled.

To get notified the minute the campaign launches, you can join the mailing list, follow (or support) Leif & Thorn on Patreon, or subscribe to the artist’s profile on Kickstarter. (That last one will be fastest, but it also emails you every time I back someone else’s project, so consider your inbox.)

So this is the point where I ask you for something. 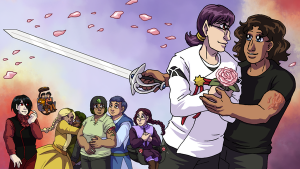 For the project page of the Volume 1 campaign, I included a bunch of compliments from readers — to show that Leif & Thorn is a hit with the coveted demographic of People Other Than The Creator.

All of that came from unsolicited comments, left on various strips. And I could pull a whole new set of spontaneous praise for the Volume 2 campaign. (Turns out, people haven’t stopped liking this thing!)

But…maybe some of you would like to do it on purpose?

Take a few minutes to show/tell the world why you’re a fan of Leif & Thorn! It can be in any format, such as:

If you post something on another site, go ahead and tag me, then please comment here with the link as well!

I’m not promising I’ll use everything on the Volume 2 page. (For one thing, that would be just asking for troll responses…)

But this isn’t a contest to create the Best/Longest/Most Poetic Endorsement, either. Just be earnest and real, and I’ll grab a cross-section of responses, designed to highlight a wide range of things readers like.

And even if your comment doesn’t get used this time, I’ll hold on to it, and might pull it out for future promotions.

Get yours in before the end of August to be in time for the campaign!

(…or get it in afterward, because hey, nice comments at any time will make my day a little brighter.)

My favorite thing about Leif and Thorn is that it updates every day of the week. I have an insatiable need for content and there’s no other comic out there that delivers on such an engaging and well-built story and world AND updates every day. It’s the perfect comic! And I read a lot of webcomics. I recommend it to everyone.

I like to use the update frequency as a selling point, but it’s not the kind of thing people spontaneously bring up a lot XD

This is one of four comics that I check back on the page more than once a day. I deeply enjoy the discussions in the comments sections, and I adore that there’s a new page every day! 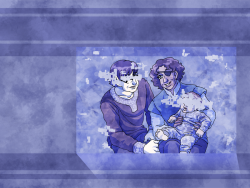