Edit, June 22: Wrote a batch of updated mini-profiles, now on the cast page. Currently there are no spoiler-cuts, but the length is a bit longer than Style 2, shorter than Style 3.

…for the main and secondary characters, anyway. Tertiary characters are probably going to get the “half-dozen words, max” treatment. (Anyone more background than that just doesn’t appear on the cast page.)

Also! These descriptions are built into the character tags themselves, so if you follow a tag to get all of a character’s appearances, you’ll see the mini-profile at the top. Is that useful, or what?

Backstory behind the readmore:

So, okay, I asked a bit about the character profiles list the other day. But now I’m looking for more feedback, with some questions that won’t exactly fit in the commentary on a strip.

But I could put some a-few-lines-long descriptions back.

Or I could put in a-few-sentences-long descriptions.

I could even take advantage of the spoiler-cut feature, and make a nice clean grid with longish descriptions that only expand when you click them.

Examples of each, and a poll: 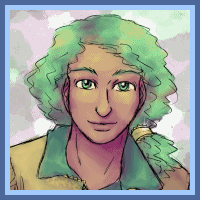 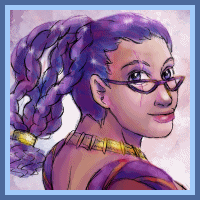 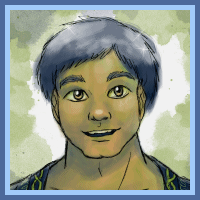 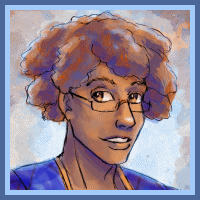 Style 3: Long descriptions behind a cut

Juniper Sel
Thorn’s sardonic second-in-command (replacing Moss after the dragon). Likes practical solutions; hates show tunes. Agender (they), attracted to anyone but struggling to fit a partner in their work. Backsword.
(wiki, appearances)

Violet Dupont
Knight, strategist, low-key snarker, mixed-race, avid reader of all kinds of books. Best friend/housemate of Rowan, who she’s known since they were 14. Sometimes indulges a kink for Tamaputians. Broadsword.
(wiki, appearances)

Birch Persil
Knight, cinnamon roll. Lost his right leg to the dragon; now a below-the-knee amputee with a cool magic prosthetic. Changed his name when he married Annie, since he has a bunch of siblings and she doesn’t. Rapier.
(wiki, appearances)

Here’s a poll, for easy one-click responses. Got more detailed feedback? Leave a comment, let me know what you think.

Which style of character profiles would you like best on the cast page? (Pick up to 2)

I think that style 2 as default, with a “collapse descriptions” checkbox to make it like style 3 would be most user friendly.

(…I also don’t have any easy pre-installed code that’ll do it that way, but if it’s useful to enough people, I’m sure I could figure it out.)

what if it was the opposite – start with style 3, add an “expand all”?

That’s another one for the “technically possible to code, but I’d have to do some extra research to figure out how” column.

…also, each “expand” button is an individual Javascript event, and I’m a little wary of having a “trigger that much Javascript all at once with a single click” button. But maybe that’s an out-of-date worry and modern browsers are hardy enough to handle it, idk.

And we’ve got a request for pronouns in the poll, hmm. That could go a couple different ways.

If I’m trying to write the Most Compact Descriptions Possible, I’ll only make a point of including a character’s pronouns when it’s ambiguous. As measured by “do readers ever get them wrong in the comments?” (Which is a different question from “are they trans?” For instance, Juniper and Sigrún have both been mis-pronouned, Violet and Imri both haven’t.)

But if we go with medium-to-long descriptions, it makes more sense to have the pronouns show up in all of them.

And of course, all the wiki entries should have pronouns in them, no matter what!

Adding in the pronouns helps reinforce the idea that you shouldn’t assume someone’s pronouns, even if you think you know what they are. But honestly, I don’t really read the cast page much, so take my opinion with some salt.

I like having pronouns for everybody, because that’s the main reason I visit the cast page or wiki. I also like that it enforces that pronouns aren’t “what you look like unless otherwise specified,” because that reinforces the idea that gender/pronouns can be determined at a glance most of the time.

If you only put pronouns for people who get consistently misgendered, I feel like it singles out people who don’t look the way people “expect” that gender to look, if that makes sense?

The empirical evidence, going by the low rate at which readers misgender the characters, is that they can determine gender/pronouns at a glance most of the time…

And, listen — I get that there are groups of people who get misgendered by accident a lot, for whom the approach of “let’s not assume your gender at all” feels kind and supportive. This isn’t new and unconsidered territory for me. It makes sense, I promise.

Thing is, there are also groups of people who get misgendered on purpose. As a malicious attempt to invalidate their identities, to undermine their confidence, to just generally make them feel bad. For people in those groups, an approach of “let’s deliberately second-guess your gender, as a favor to you! surely it won’t make you feel bad if our intentions are good!” is…not actually helpful.

(Or, to consider it from the other direction: if you clock someone as a trans woman, but you don’t make a thing of it and just address her as “ma’am” or “miss” without being prompted, that’s the move that feels kind and supportive. That’s a fresh hit of gender euphoria, every time.)

Humans are complicated! Gender is weird. There’s no easy-answer, one-size-fits-all approach that is perfectly affirming for all marginalized people. Which is why I never want to feel like I’m leaning too hard into pushing the idea that there is.

Fair! As someone whose gender/pronouns don’t match what people expect based on my appearance, and who basically goes through life misgendered at every moment, I have always felt like having a way to quickly double check someone’s pronouns without having to ask anybody directly is the ideal, and that’s what the wiki/cast page is for me with this comic.

I’m not saying you have to do that, just explaining my own perspective with a bit of personal experience. You’re right that there’s no one-size-fits-all, but it’s always seemed off to me that (many, many) authors only specify pronouns for characters who don’t fit the expectations of the gender binary, because it reinforces that those characters “break the mold”—whether that’s a masc cis woman or a femme cis man or trans characters of any kind.

Because the columns are narrow (which is makes sense and is fine!), descriptions wrap after 1-4 words, which looks cluttered and uneven (and requires more scrolling). So IMHO #1 is 500 times better than the other two because it’s super clean!

#3 is okay but not great because it looks clean till you expand, then ugh. 😉 So I don’t care for it, but I could see why you may want it.

I’d use #1 but maybe use mouseover hover text (mobile: touch-pop-over) if feasible, for the best of all worlds without the narrow overly-wrapping text. (I’m not sure I’m explaining what I mean, you know, like you hover or touch and a decent-sized box shows up.) (Or maybe that’s only worth doing on desktop with hover, and not worth doing for mobile.)

The layout has gotten wider and more flexible since these were originally coded, so I can make the boxes a little wider…any feelings about how wide they’d have to get before the descriptions would look nice?

I’m sure the hover text would look fine on some mobile devices, but on mine, at least, it only shows the first handful of words. (…also, I want to put relevant links in the text. Like, Birch’s profile will have a link to Annie.)

I’m not sure, just enough so the text looks more consistent/less jagged between people. Uh . . . did you update the examples above already?! I’m confused or they look a little different and slightly better now. It seems like there’s a BIT more text per line, which makes things look smoother. I’m in a different browser but (checking…) my other browser matches this one.

Anyway, I’m warming to #3 now as a cleaner initial look but quick info with a click/tap, if they’re this wide or wider. But IMHO the shorter text from #2 (ETA: in the collapsed sections from #3, I mean), because if you want that much detail (ETA: I mean if you want as much info as the text in #3), wouldn’t you click through to the wiki page to get all the info anyway?

If you tell me this page is identical to this morning when I looked at it, I will check my non-existent meds to see what’s wrong with me. 😉

I pushed an update to the CSS, yes! The server caches stuff in a not-totally-consistent way, so my device isn’t getting the new version yet, but it sounds like yours are.

They also resize if you change the browser width/zoom, check it out 😀

P.S. I added two clarifications in parens above.

I will say, for me right now on iphone xr, I’m seeing some chop on ALL the options.