Leif & Thorn is going to have some characters speaking Tamaputian in the next few months. It’s come up before in the comic, but never in long-ish conversations…so I’m thinking, this is the time to get decisive about fonts.

Way back when Mata and Pato first appeared, they got the occasional line of dialogue in Tamaputian, which was typed in Comfortaa. Very plain, not a lot of character…easy to read, but probably hard to distinguish at a glance from some other fonts.

In the Kolpovision storyline, I gave the singers from Tamapoa a few of their own lines in Tamaputian, and typed those in a version of Ænigma Scrawl. Definitely has its own distinct vibe! …Not sure I actually like how it looks in wordier speech bubbles.

So I’m thinking about switching it again. But to what?

Light spoilers, in the sense of “new background characters will exist, here are some of their faces.”

END_OF_DOCUMENT_TOKEN_TO_BE_REPLACED

Question went up on a discord channel, asking for webcomic recs “that you think has something really standout about them and worth checking out. I’m mainly looking for comics that you feel do a particular thing exceptionally well, particularly with the artwork. Genre doesn’t matter, but please explain why I should read them.”

…so I immediately threw in a bunch, and then figured, hey, these comics deserve more exposure than “transient links in a chat that’ll be washed away once the next conversation happens.”

No special theme to this, just a bunch of comics + a particular thing I think they do well.

Shattered Starlight: mostly greyscale with striking spot-colors, does really good things with texture, makes a world that feels gritty and lived-in while adding some of the stylistic flair of a magical-girl series

Kochab: pretty characters explore a mysterious fantastical setting, all done in delicate lineart and amazing vivid color palettes, with a touch of animation

The Stoop-Gallants: great comic timing, not just in the dialogue + punchlines but in the art + background details (also: lovable characters and an engaging plot)

Shiloh: vivid lighting that really captures every scene’s weather and time of day, detailed and stylish city settings (I’ve saved a bunch of them in my inspiration folder), great with dramatic angles, still don’t know where the plot is going but it sure is fun to look at while I find out

Lady of the Shard: does amazing things with monochrome pixel art — the artist can convey a stunning amount of expressiveness and atmosphere with a minimal amount of lines (also: fun sci-fi story, heartwarming romance)

Lore Olympus: hardly needs recs since it has literally millions of followers, but here I am anyway, lovely art where the different theme colors for each character are used in a way that enhances the style rather than simplifying it

Bite Me!: wacky historical vampire farce, another one with great comic timing and delightfully expressive characters, I can’t tell how much the art is traditional and how much it’s really crisp digital doing a lovely impression of traditional when it wants to

broken: accidental friendship + rescue from a dystopia, really gets across the eldritch horror with a combination of on-point designs, shifting colors, well-placed animation, and medium-breaking tricks like “this reality shift is so big it overwrote the page layout”

Schlock Mercenary: great job of sci-fi worldbuilding, slowly escalating the problems that are caused just by having to work on a galactic scale, along with the problems caused by the tech to solve the previous problems (also: fun interspecies mostly-lighthearted comedy)

Updates on my ongoing effort to go through the basic Leif & Thorn layout CSS, make light updates, and generally clean it up.

For readers, the most visible New Thing lately is the fonts. Decided I wanted the “auto-generated/informative/metadata” text to have its own look, instead of being “the fancy title font (Merienda) but smaller” or “the main-text font (Montaga) but more italic.”

So now you’ll see a bunch of Fira Sans. Sans-serif, lightweight, gentle slant. I’m into it.

END_OF_DOCUMENT_TOKEN_TO_BE_REPLACED

Never made a full-on post about this on Leif & Thorn, and I should probably put it front-and-center, at least for the next 2 weeks…

First: BICP is getting an annotated re-release! In the vein of Guilded Age or Narbonic, pages are re-posted with author commentary, 5 days a week, starting from chapter 1.

With almost 1000 pages, this means I have enough material to keep going for the next few years. It’s the longest buffer BICP’s ever had.

END_OF_DOCUMENT_TOKEN_TO_BE_REPLACED

Update, Tuesday (3/2) just after midnight: Okay, now I’m just playing with zooms. There’s a new row of buttons above every comic — toggle between sizes (only affects the mobile layout) and let me know what you think.

Also, open the main stylesheet CSS and refresh, to make sure you have the latest version of that! (It’s the “everything but the color scheme” CSS, and cached versions may be glitchy.)

Note: all the variants are in the Northern Lights theme, because “color scheme + page size pick-your-own combo platter” is too much to code for a first-run test. Switching to a different site theme will return you to the current default zoom.

END_OF_DOCUMENT_TOKEN_TO_BE_REPLACED

The Volume 3 packing station is in full swing. Featuring large boxes of books, and small piles of Stuff What Goes With The Books:

END_OF_DOCUMENT_TOKEN_TO_BE_REPLACED

The ebook of Leif & Thorn Volume 3: Creeping Vines is now available! Readers who preordered it through Kickstarter got the first crack, but anyone who missed the campaign can finally buy it on Gumroad.

The ebooks of Volumes 1 and 2 are available in the same store — along with the paperback versions, if you’re into those. (The printing of Volume 3 is in progress as we speak.)

Along with song lyrics, fancy recolored strips, and a bunch of exclusive bonus sketches, this is the volume where I had a new map done.

END_OF_DOCUMENT_TOKEN_TO_BE_REPLACED

This is the post where I credit everyone who backed Leif & Thorn Volume 3!

You’ve set a backer record, a funding record, and the wheels in motion for me to print a whole new book. Thanks to every single one of you. 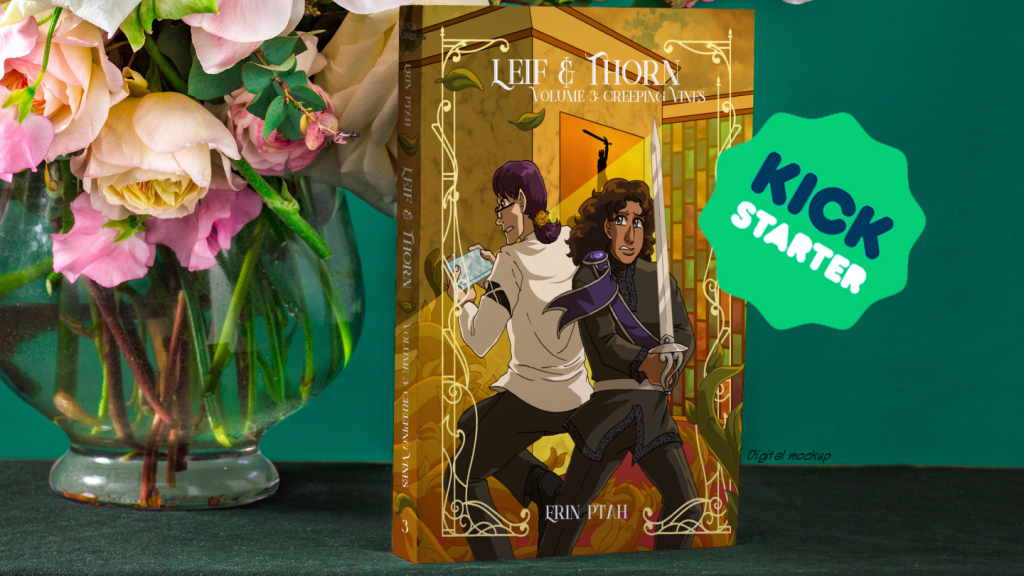 A Hero and a Scholar

Long-Runner Print of the Narrative

The Book Where It Happens

A Print Of The Narrative

Art request meme! I’ll do sketches (and sometimes more than sketches) for the first 15 people who comment with a Leif & Thorn ship, a prompt from column A, and a prompt from Column B:

END_OF_DOCUMENT_TOKEN_TO_BE_REPLACED

The Kickstarter to print Volume 3 is off to a great start, so here’s the part where you get to vote on “which art should be used for the exclusive mini-print that goes in every book.”