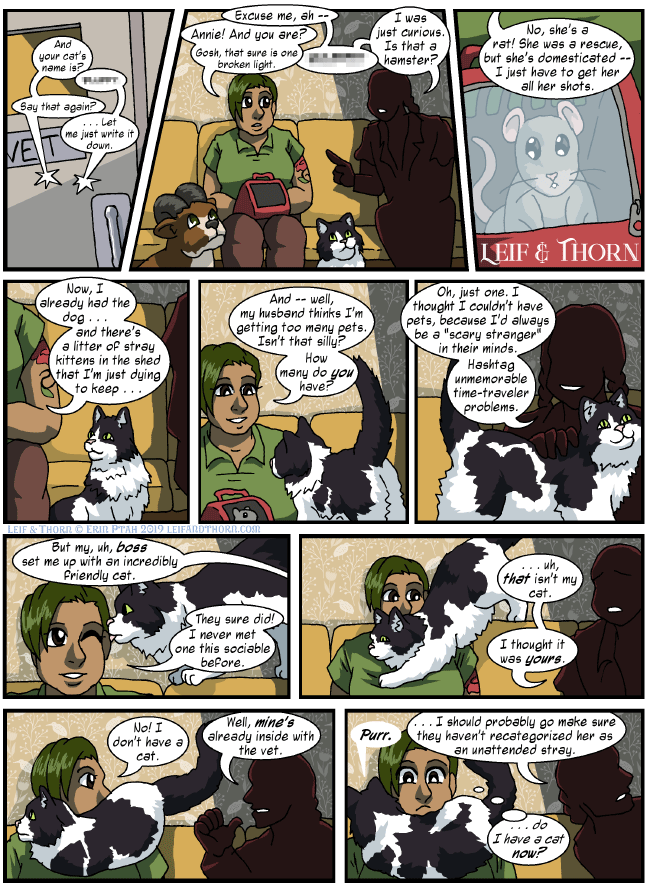 Continuation of the strip where Annie (and, by extension, Birch) adopted a rat.

And no, she’s not keeping this cat…he’s just a cameo from the mini pin Kickstarter. (Yes, I am still working on those with Volume 2 about to drop…)

Vet: And your cat’s name is?

Annie: Annie! And you are? Gosh, that sure is one broken light.

WiB: [blur]. I was just curious. Is that a hamster?

Annie: No, she’s a rat! She was a rescue, but she’s domesticated — I just have to get her all her shots.

And — well, my husband thinks I’m getting too many pets. Isn’t that silly? How many do you have?

WiB: Oh, just one. I thought I couldn’t have pets, because I’d always be a “scary stranger” in their minds. Hashtag unmemorable time-traveler problems.

But my, uh, boss set me up with an incredibly friendly cat.

Annie: They sure did! I never met one this sociable before.

WiB: Well, mine’s already inside with the vet.

WiB: . . . I should probably go make sure they haven’t recategorized her as an unattended stray.

One day, the Woman in Black’s tendency to give out state secrets under the assumption that no one will remember them is gonna bite her in the butt.

In fairness, she has a fairly reliable tell on when people can see through it: 100% of people who didn’t make a comment about her being cloaked in shadow have also completely pierced her glamour and recalled her with clarity. That said, she is also already aware that her unmemorableness is getting her mouth into trouble.

Didn’t it already bite her?

Did… that cat just lay on her chest like a shelf?