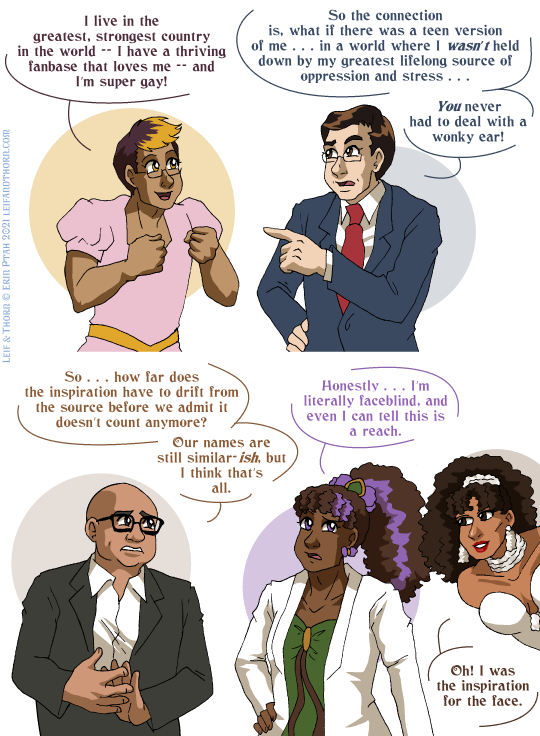 Characters with their distant fake-news (and one faceclaim) relatives.

Teen heartthrob Cedar was reworked from a boy-band AU “Stephen Colbert”, although Ceannis doesn’t have homophobia, so his issues are just from the pressures of stage parents. Laurel was reworked (a little more thoroughly) from a magical-wizard AU Larry Wilmore; her model is now Portrayed By trans actress Indya Moore.

Cedar: I live in the greatest, strongest country in the world — I have a thriving fanbase that loves me — and I’m super gay!

Stephen: So the connection is, what if there was a teen version of me . . . in a world where I wasn’t held down by my greatest lifelong source of oppression and stress . . . You never had to deal with a wonky ear!

Larry: So, uh . . . how far does the inspiration have to drift from the source before we admit it doesn’t count anymore? Our names are still similar-ish, but I think that’s all.

Laurel: Honestly . . . I’m literally faceblind, and even I can tell this is a reach.

Indya: Oh! I was the inspiration for the face.

Okay, I would not have called Larry Wilmore in a thousand years. (Then again, I don’t think I’d have called “Stephen Colbert,” either.)

Yeah, the Larry ref isn’t “a thing you could ever guess from the comic” so much as “obscure trivia for the kind of nerd superfans who really love obscure trivia.”

…Guessing that any particular character of mine is “Stephen”-inspired is, statistically speaking, your safest bet.

so who’s his Jon Stewart?

We have more than enough romances (and other suspenseful arcs) to keep track of already…I don’t want to bring back the Cedar And Holly Adventures until we get at least a few other things wrapped up.