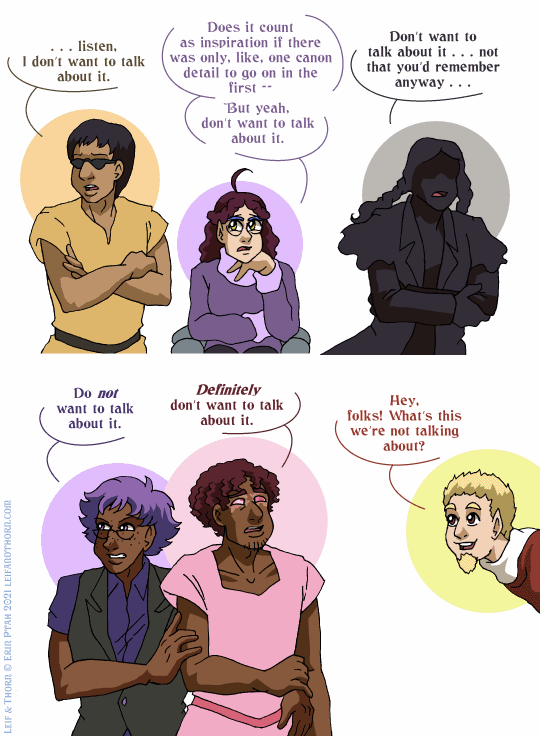 Avoided this group as long as possible, but by now I’ve kinda done all the rest, so.

Iona: Does it count as inspiration if there was only, like, one canon detail to go on in the first — But yeah, don’t want to talk about it.

Dexie: Do not want to talk about it.

Hermosa: Definitely don’t want to talk about it.

Sven: Hey, folks! What’s this we’re not talking about?

I think we all can agree a particular book was very disappointing for what that did with person that inspired our WIB.

Yeah, that book had all kinds of problems, but the treatment of that character was the worst.

What… What are we not talking about? If it’s a YA dystopia novel I probably have no clue which one

They’re not talking about Welcome to Night Vale. The ‘inspirations’ I can suss out from my memories:

Kale is based on Kevin, who is initially described as a Cecil’s double physically. He’s a radio show host for Desert Bluffs’ Community Radio, describes the photo of Cecil he sees in a weakly positive manner, and is associated with The Smiling God. he is described as either having no eyes, or obsidian black eyes.

Iona is based on Janice Palmer. She was born with spina bifida, leaving her unable to walk.

The Woman in Black is loosely based on The Man in The Tan Jacket, who always has important information to impart, but no one remembers his face, but they DO remember his tan jacket and that he was around.

Dex is supremely loosely based on Cecil, who is a Radio Show Host on Night Vale Community Radio, and always speaks in glowing terms about his partner Carlos, and describes Kevin’s photograph in decidedly negative manner.

Hermosa is loosely based on Carlos, who, as far as I’m concerned because of where I pulled the ripcord on WtN, is in a happy relationship with Cecil.

And Sven is loosely based on Steve Carlsberg.

Thank you. I wrote that right before going to bed and wasn’t at my sharpest.

Jesus. Seriously, what happened to Nightvale?

I dropped that series a very long time ago because I was frustrated by the amount of hidden lore only available if you had money to dish out to live shows. I don’t know what happened that is making it so taboo now… but oof.

I’m not sure what you’re talking about. I read all the way to the end of Erin’s WtN stuff, and they were fine. Admittedly, checking back in, I don’t remember the last actual chapter, but they’re still fine there.

What do you mean those were fanfics? Never mind, I don’t want to talk about it.

>Hermosa is loosely based on Carlos, who, as far as I’m concerned because of where I pulled the ripcord on WtN, is in a happy relationship with Cecil.

…now I’m scared. I’m re-listening to the series while I work on my final projects for graduation. I started at the beginning because I couldn’t remember where I left off, but I do remember leaving them in a very happy, devoted relationship…

Do you remember roughly around when did you stop listening?

The first one I didn’t listen to was Fashion Week, because Carlos had gotten really sketchy in the one before about when he was coming home

I stopped listening at episode 49, which was the latest episode at the time. I just got out of the habit of checking for episodes.

In hindsight it’s obvious, and I very much noticed the first three.

(You made the right call in dropping the podcast when you did; I managed about another year and decided that was it, that was enough of an ending and I was done.)

Erin, do you mind saying why you dislike Night Vale now? Or if you’ve already talked about it somewhere else, you could just link that.

I really don’t want to dwell on the full list of Things This Show Did That Made Me Sad, because I am actively trying to use that brainspace for, you know, non-sad things. But the highlights (lowlights?) were:

[i.e. the active jossing of fandom’s hopeful/increasingly-desperate interpretation of “he’s a thoughtful and respectful person who cares about boundaries, he only seems like a callous asshole in this scene (and that one, and this one, and that other one…) because he’s a neurodivergent cinnamon roll who has trouble figuring out where they are”]

“I… did not prepare for the Sphere. It’s not that I forgot, i-it is that I do not care, and I’m not afraid. I don’t know. I wear leather pants and a Hawaiian shirt and a baseball hat made of honeycomb. I just wore the same thing I slept in last night. If I get ingested by a fashion-conscious Sphere for wearing comfy casual clothes, then that’ll just be what happened to me.”

[not the lines themselves, but the fact that his season-long arc of increasing depression got to the point of announcing his suicidal ideation live on-air, and nobody cared]

[[if I ever write a Leif & Thorn storyline where Dex is that depressed, you can bet Hermosa will be moving heaven and earth to get them safe]]