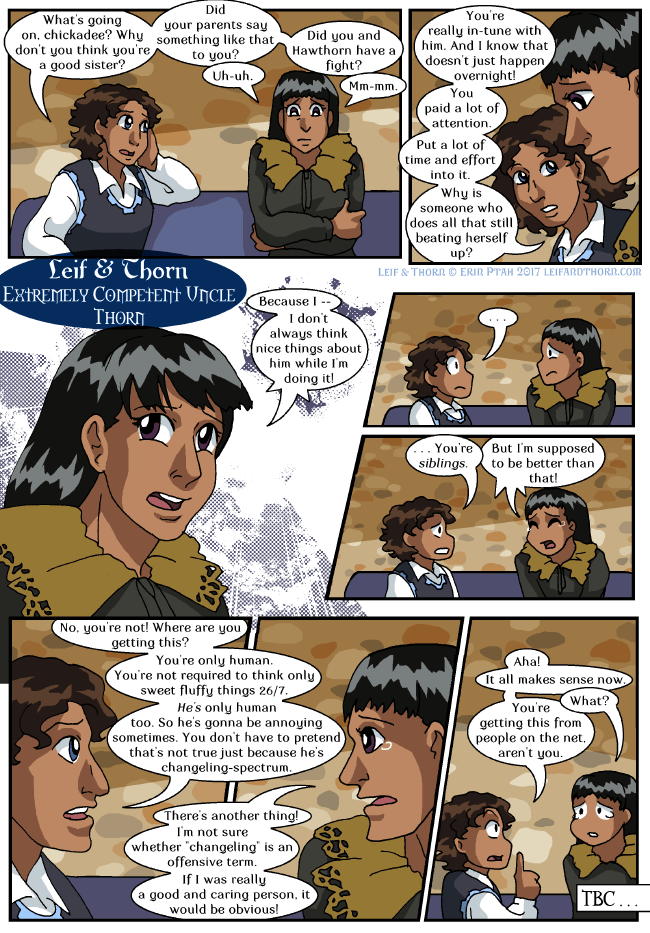 In case you were wondering the in-universe name for Hawthorn’s condition.

Thorn: What’s going on, chickadee? Why don’t you think you’re a good sister? Did your parents say something like that to you?

Thorn: Did you and Hawthorn have a fight?

Thorn: You’re really in-tune with him. And I know that doesn’t just happen overnight! You paid a lot of attention. Put a lot of time and effort into it. Why is someone who does all that still beating herself up?

Hyacinth: Because I — I don’t always think nice things about him while I’m doing it!

Hyacinth: But I’m supposed to be better than that!

Thorn: No, you’re not! Where are you getting this? You’re only human. You’re not required to think only sweet fluffy things 26/7. He’s only human too. So he’s gonna be annoying sometimes. You don’t have to pretend that’s not true just because he’s changeling-spectrum.

Hyacinth: There’s another thing! I’m not sure whether “changeling” is an offensive term. If I was really a good and caring person, it would be obvious!

Thorn: You’re getting this from people on the net, aren’t you.

Of course it does. Now let’s guess what it is!

Are changelings the same in Ceannis as they are here? If they are, then I’d agree with the people on the net that the term carries a lot of negative stereotypes, but I don’t want to assume that it’s the same. Good for Hyacinth for considering it and doing as much as she can to accommodate Hawthorn instead of forcing him into neurotypicality. And good for Thorn for giving her the space to have regular sibling disagreements.

Request information on what “neurotypicality” is?

In this universe, the term “neurotypical” is used where one may have, in the past, said “normal”. For example, in my son’s school we can say ” He has really made wonderful progress making friends with his ‘neurotypical’ classmates.” This has been done in an effort to address the fact that the thought of a “normal” person/kid/etc is simply ridiculous, and often damaging. But, “typical” can be understood by percentages, and can change as the population changes. Also, it doesn’t make those like my son feel as “wrong” because they are “abnormal”. By my experience so far, negative connotations have not yet developed. (They always seem to. Just give it time.)

Hope this helps! Anyone else have knowledge or experience with this?

At some point, you need to stop inventing new words because the negative connotations are already at minimal sustainable level. If you don’t, you just create minefield of “unusable” words and make the language harder to use. English already overdid it with colors.

Uhhhh, what word did Keep invent?

I meant “you” in the general sense, not Keep specifically.

Depending on who’s using it, it can mean either “doesn’t have autism” or “doesn’t have any conditions affecting how their minds work.” (So that could be autism, but also depression, ADHD, hallucinations, any number of other things.)

Strange to hear “changeling”, which I associate with medieval superstition, paired with “spectrum,” which seems, I dunno, kinder and/or more scientific.

As strange as combining magic crystals with software? I think it fits.

No, I’ve had time to get used to computer crystals. Anyway, that’s basically what silicon chips are, right?

I wanted to use something that didn’t duplicate any real-world terminology, but that would give readers the right general impression.

It parallels how English uses “dwarfism” to refer to a genetic condition that makes humans short, not to claim anyone is really a mythical dwarf.

As someone who is on a spectrum (Hense my nickname) I do not mind people thinking of me as such. However I accept that this is not the same for all people with neuroatypial disorders. I am pleased with Hyacinth showing her inner conflict about this, and in my opinion I think she is a good person, both because of the affore mentioned inner conflict and all the points Thorn brought up in panel 2.

I love the “changling” thing