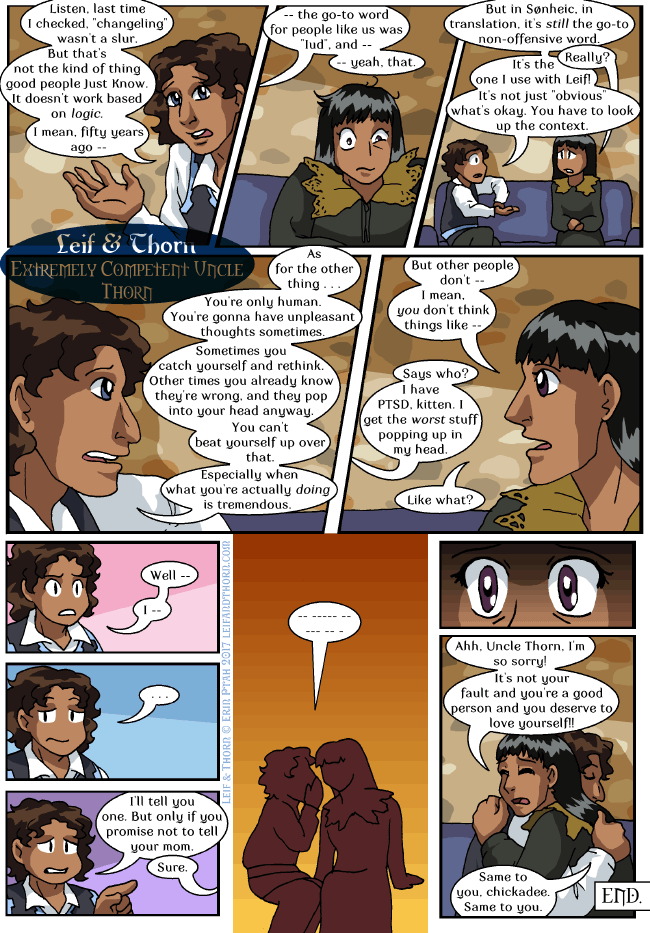 And this concludes our three-month uncle-niece bonding session.

(Never again, readers. Next time I want to tell a short 6-page story, you’re getting a week of back-to-back Sundays.)

Thorn: Listen, last time I checked, “changeling” wasn’t a slur. But that’s not the kind of thing good people Just Know. It doesn’t work based on logic. I mean, fifty years ago —

But in Sønheic, in translation, it’s still the go-to non-offensive word.

Thorn: It’s the one I use with Leif! It’s not just “obvious” what’s okay. You have to look up the context.

As for the other thing . . . You’re only human. You’re gonna have unpleasant thoughts sometimes. Sometimes you catch yourself and rethink. Other times you already know they’re wrong, and they pop into your head anyway. You can’t beat yourself up over that. Especially when what you’re actually doing is tremendous.

Hyacinth: But other people don’t — I mean, you don’t think things like —

Thorn: Says who? I have PTSD, kitten. I get the worst stuff popping up in my head.

I’ll tell you one. But only if you promise not to tell your mom.

Hyacinth: Ahh, Uncle Thorn, I’m so sorry! It’s not your fault and you’re a good person and you deserve to love yourself!!

now i’m very curious as to what happened

His wife was frying something?

if I had to guess… the bad thought is “I should have fried with them. I’m alive because I’m a coward.”

Was the word ‘lud’ or ‘iud’? I’m having trouble telling.

Probably “iud”, since the name of their ethnic group is “iuilic”. I think it might be intended as a parallel to “yid”, which refers to a Jewish person and is a neutral term in Yiddish (you can see the shared root) but is considered offensive in English.

A question to the author: what made you think that it is better if the audience doesn’t know?

The focus was supposed to be on Thorn’s relationship with the kids, not on his trauma. If I went into detail, it would overshadow the rest of this story, and it would feel too abrupt to end here instead of addressing it further.

Plus, it foreshadows a later reveal, and gives readers something to chew over in the meantime.

Haha. I love that you transcribed Hyacinth’s facial expression (and how close a transcription it is!). Did you choose an emoticon-compatible look in advance, or did it just work out that way?