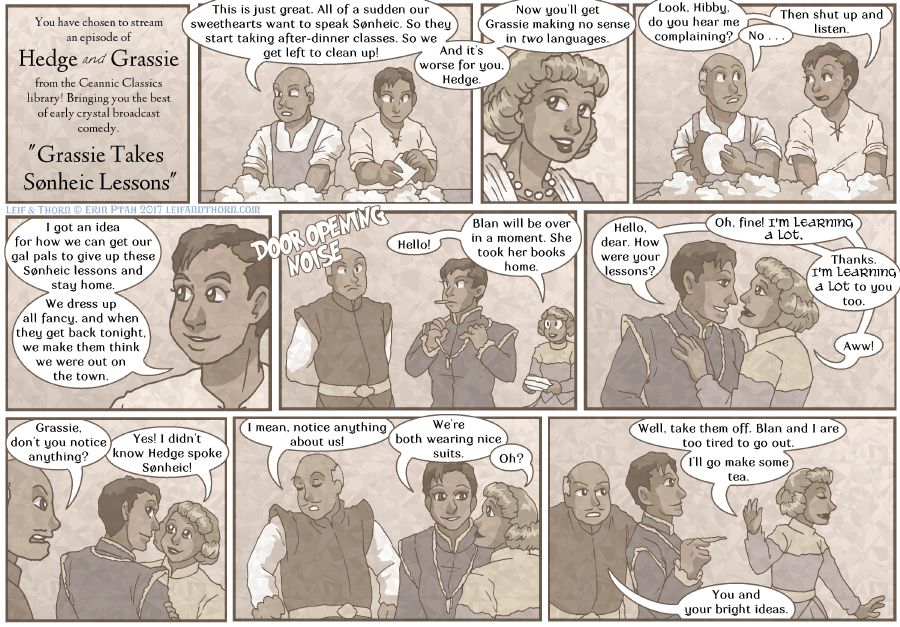 Today’s episode is based on “Gracie Takes Spanish Lessons.” A lot of the jokes come from the specific culture of the US, of its gender relations, of Spanish-speaking countries, and of how they relate to each other…which makes it a great script to adapt, because you get to replace them with substantial in-universe worldbuilding.

You have chosen to stream an episode of Hedge and Grassie from the Ceannic Classics library! Bringing you the best of early crystal broadcast comedy.

Hibby: This is just great. All of a sudden our sweethearts want to speak Sønheic. So they start taking after-dinner classes. So we get left to clean up! And it’s worse for you, Hedge. Now you’ll get Grassie making no sense in two languages.

Hedge: Look, Hibby, do you hear me complaining?

Hedge: Then shut up and listen.

I got an idea for how we can get our gal pals to give up these Sønheic lessons and stay home. all fancy, and when they get back tonight, we make them think we were out on the town.

Grassie: Hello! Blan will be over in a moment. She took her books home.

Hedge: Hello, dear. How were your lessons?

Hedge: Thanks. I’m learning a lot to you too.

Hibby: Grassie, don’t you notice anything?

Hibby: I mean, notice anything about us!

Well, take them off. Blan and I are too tired to go out. I’ll go make some tea.

Hibby: You and your bright ideas.

I would so watch that sitcom.