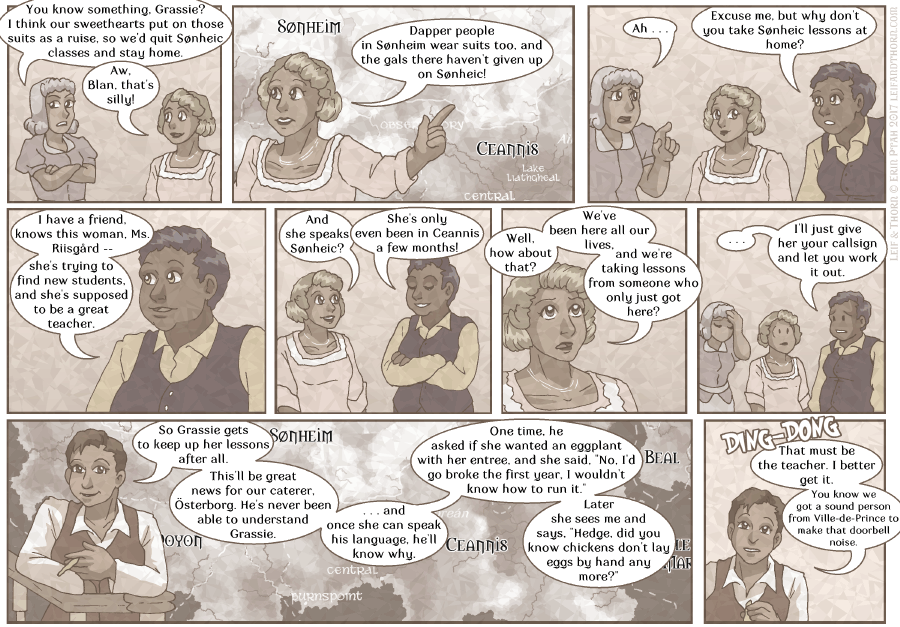 Yes, there are two major characters named Hibby (short for Hibiscus) in the same show. Yes, it’s confusing. No, they don’t worry about it.

“Dapper people” is the awkward English translation of a single Ceannic word. “Dandies” might work too. It’s a broader category than the word I’m translating as “butch” (which still includes both Hibbies, but doesn’t cover Hedge).

Blan: You know something, Grassie? I think our sweethearts put on those suits as a ruise, so we’d quit Sønheic classes and stay home.

Dapper people in Sønheim wear suits too, and the gals there haven’t given up on Sønheic!

Hibby: Excuse me, but why don’t you take Sønheic lessons at home?

I have a friend, knows this woman, Ms. Riisgård — she’s trying to find new students, and she’s supposed to be a great teacher.

Grassie: And she speaks Sønheic?

Hibby: She’s only even been in Ceannis a few months!

Grassie: Well, how about that? We’ve been here all our lives, and we’re taking lessons from someone who only just got here?

Hibby: . . . I’ll just give her your callsign and let you work it out.

Hedge: So Grassie gets to keep up her lessons after all. This’ll be great news for our caterer, Österborg. He’s never been able to understand Grassie.

One time, he asked if she wanted an eggplant with her entree, and she said, “No, I’d go broke the first year, I wouldn’t know how to run it.” Later she sees me and says, “Hedge, did you know chickens don’t lay eggs by hand any more?”

(DING-DONG)
That must be the teacher. I better get it. You know we got a sound person from Ville-de-Prince to make that doorbell noise.

I didn’t get it, i could tell it was supposed to be a reference.

Thanks =) The original running gag is about Harvard, but that name was harder to riff on.

This is the page where I realized that Hedge is female. Not the Person-on-the-Street interviews one where she was called a comedianne (though the fact it’s our word for a female comedian did confuse me a little), it was this one. My brain saw her dapperness and pegged her as male… Plus the name Hedge seemed masculine to me and the show seems fifties-ish to me.

Not one of my finest moments.

Don’t sweat it too much, Hedge gets mistaken for a handsome man in-universe too (or at least she used to, before getting famous). She’s the Tenou Haruka of classic fantasy comedians =)