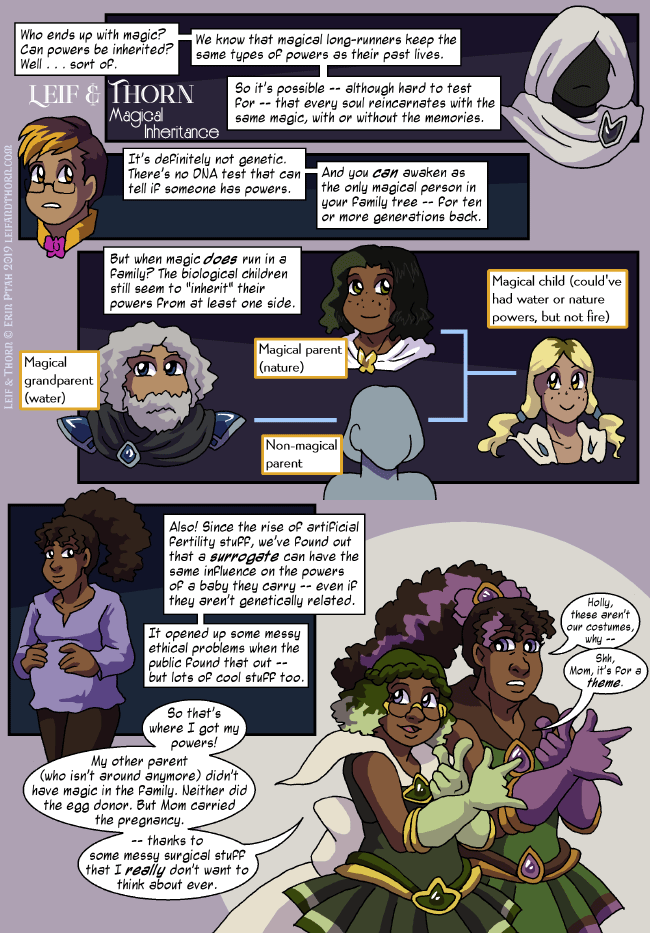 Who ends up with magic? Can powers be inherited? Well . . . sort of.

We know that magical long-runners keep the same types of powers as their past lives. So it’s possible — although hard to test for — that every soul reincarnates with the same magic, with or without the memories.

It’s definitely not genetic. There’s no DNA test that can tell if someone has powers. And you can awaken as the only magical person in your family tree — for ten or more generations back.

But when magic does run in a family? The biological children still seem to “inherit” their powers from at least one side.

Magical child (could’ve had water or nature powers, but not fire)

Also! Since the rise of artificial fertility stuff, we’ve found out that a surrogate can have the same influence on the powers of a baby they carry — even if they aren’t genetically related.

It opened up some messy ethical problems when the public found that out — but lots of cool stuff too.

Holly: So that’s where I got my powers! My other parent (who isn’t around anymore) didn’t have magic in the family. Neither did the egg donor. But Mom carried the pregnancy. — thanks to some messy surgical stuff that I really don’t want to think about ever.

Laurel: Holly, these aren’t our costumes, why —

Oh a uterus transplant? Those are super cool~

Does pregnancy affect the pregnant person’s magic and/or transformation? I imagine it’d change the shape of the transformed outfit. I know it’s pretty common in magic systems for the child/pregnancy to sap magic from the person carrying them while they are pregnant.

The outfit adapts to the shape of your body. The pregnancy doesn’t sap magic as a regular thing, but any healing powers you have, you’ll instinctively put them toward any complications or fetal distress. And magical overexertion (especially in combat) can cause fetal distress, so you want to take it easy.

No DNA test … is that a Word of God? Because any research can only end up with “we didn’t FIND any”, it’s impossible to PROVE it’s not encoded somewhere without being able to simulate all gene expressions during whole life in computer.

Of course, the surrogate stuff points to possibility it’s extranuclear DNA … like, midichlorians? Ok, midichlorians would be big enough to disprove, but something smaller wouldn’t.

Or it’s inherited by some aura stuff or something, but even that may be possible to test.

It’s also interesting it can skip generations. Suggests there is some affinity you can have even without ever becoming magical girl.

Wait: Thorn is magical girl right? They CAN check if any person with same heartsword has same powers.

They were attempting to find a DNA link to magic, but some fire spirits asserted that they’d never find one, no matter how many billions they put into it. So the research was dropped. Officially.

There are still other groups that are attempting to find some link. Also, that *one* stubborn researcher who just couldn’t drop it. But so far, they haven’t found a link.

At that point, they started asking questions about why the family affinity business, but that probably gets down to a spirit tending to avoid being incarnated into a family where there will be an increased chance of having an energy conflict. (Or if the spirits don’t choose which body they incarnate in, whatever is making that choice is using that logic.)

Hmm, if reincarnations always have the same magic, usually reincarnate as a descendant of a grandparent, and surrogacy ‘counts’ as being a parent for magical line purposes, would this also explain some or all of the cross racial reincarnations? Have a long runner in your ancestry, surrogate for a family of a different race, and the mechanic that governs reincarnations ends up with a whole new line that’s only technically related.

Now that you mention it, I don’t actually know if surrogacy counts for “reincarnated as a relative” inheritance the same way it does for “same magic as your relatives” inheritance.

(It wouldn’t be necessary, though — in this world as IRL, all humans are related, you just have to go back enough millennia to find our last common ancestor.) 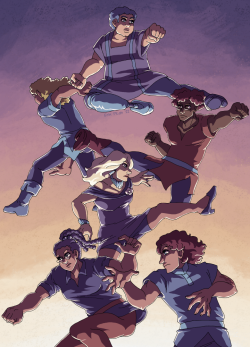