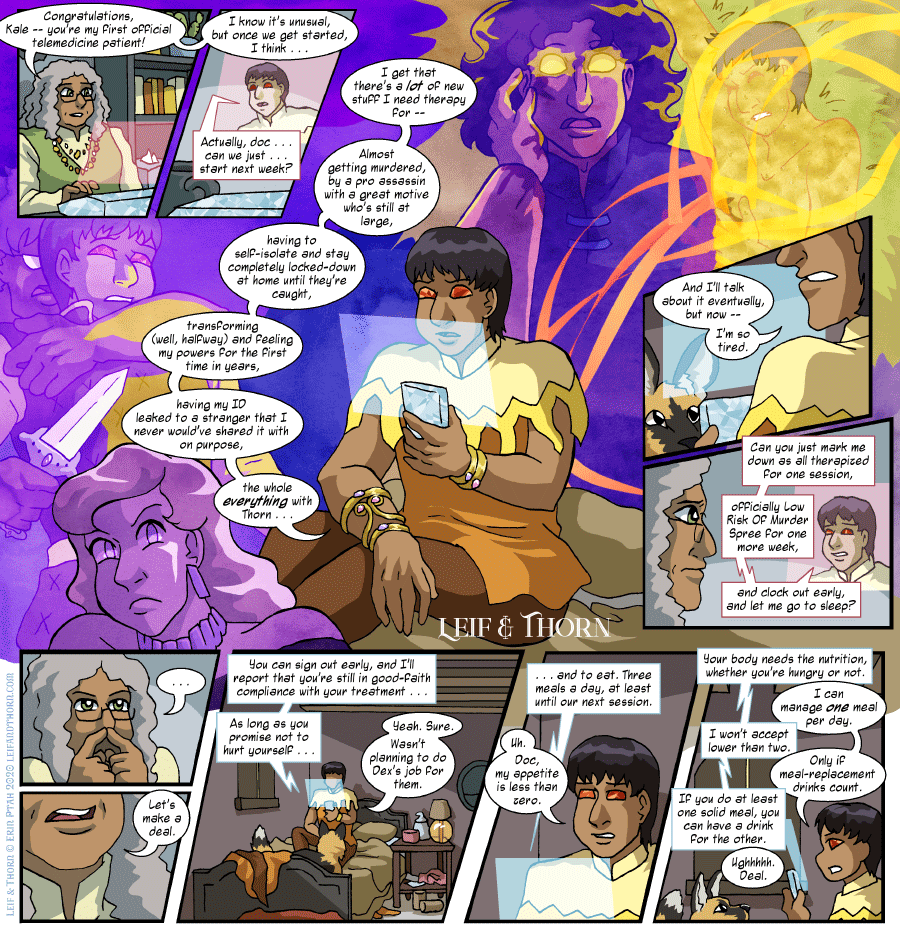 So I figured it was better to roll it up into bigger units and release them on Sundays. (Although you might still be able to reverse-engineer some of the every-4th-panel punchlines.)

Therapist: Congratulations, Kale — you’re my first official telemedicine patient! I know it’s unusual, but once we get started, I think . . .

Almost getting murdered, by a pro assassin with a great motive who’s still at large, having to self-isolate and stay completely locked-down at home until they’re caught, transforming (well, halfway) and feeling my powers for the first time in years, having my ID leaked to a stranger that I never would’ve shared it with on purpose, the whole everything with Thorn . . .

And I’ll talk about it eventually, but now — I’m so tired.

Can you just mark me down as all therapized for one session, officially Low Risk Of Murder Spree for one more week, and clock out early, and let me go to sleep?

You can sign out early, and I’ll report that you’re still in good-faith compliance with your treatment . . . As long as you promise not to hurt yourself . . .

Kale: Yeah. Sure. Wasn’t planning to do Dex’s job for them.

Therapist: . . . and to eat. Three meals a day, at least until our next session.

Kale: Uh. Doc, my appetite is less than zero.

Therapist: Your body needs the nutrition, whether you’re hungry or not.

Kale: I can manage one meal per day.

Kale: Only if meal-replacement drinks count.

Therapist: If you do at least one solid meal, you can have a drink for the other.

we’ve all had THAT therapy session.

well, I assume so. At the very least it’s pretty high on the ‘common experiences’ table right? Or is it just common for the people I tend to know? Mine was with my school counselor in high-school.

Not that I was ever considered dangerous per say. People were generally far more likely to hurt me than I was to hurt them, and I never engaged in self harm… Unless, I guess, looking out of place in front of people who respond to out of weirdness with violence counts as self harm, which my principal thought it was somehow my fault, but at least my counselor never used the phrases “Don’t try, just do it” and “why can’t you be more normal”, unlike the principal.

No we did’t. Outside US, counselors are not as populars. And, well, it sounds like good idea, but looking at how US manages, maybe it’s not as useful … that, or incorrect people decided to skip their therapy.

The US still has a massive social stigma regarding mental health treatments even with increased recognition about it. Many Americans would just try and “act normal” instead of facing the issues in their lives.

Yep. My closest friend suffers from some pretty bad anxiety – like, breaking down-every-few-weeks anxiety – but she won’t get any help for it because she thinks that she ought to just push through it. Even her parents tell her that (though I don’t think they mean any harm by it, they seem like chill people, just apparently very incorrect chill people). It’s impressive enough that she’s been open with me about it, because it took her, like, a year to even bring it up a little bit.
Not to romanticize dissociative disorders, but I’ve been really lucky to be a part of an OSDD-1b system in that regard. I’ve tried to speak up about mental health stuff before with my own parents, to ask to get help with it (not about the system, I had some pretty bad depression a while back), but they wouldn’t even consider the possibility. They told me that there was nothing wrong with me, and that even if there were I wouldn’t be allowed to get help for it because that would go on my record and then I would have a more difficult time finding a job. Fun times. My alters (well, mostly just one) actually helped me, though, and I’m actually a lot better now.
So I don’t think the issue is the counselors. It’s more that we feel pressured and ARE pressured to not take that help, even when we really need it.

It sounds like you probably know this, but for the record, your parents are completely wrong that counseling would make it harder to get a job. Employers would never even know you’d had counseling unless you brought it up with them yourself. And even if they did know, denying you a job on that basis would be a violation of the ADA (which sensible employers prefer to avoid violating, if only to avoid the possibility of a lawsuit).

I’m sorry that your parents wouldn’t let you get counseling, but I’m glad that you’re in a better place now.

Also, it costs money. See also the US healthcare system and income inequality. And it takes time – if one is working low paid jobs, this may be in short supply, not to mention possibly needing to find childcare.

You’re right about that, too. I wasn’t thinking about that at the time.

Truth. When I was in high school twenty- some years ago, counselors were referred to as “head shrinks” and basically only crazy people went there. I think the stigma came about largely from how my parents’ generation (“boomers”) was raised: keep all feelings on lock- down for men, don’t complain and stand by your man for women.

Now, most of my friends have had some kind of talk therapy, as have most other adults I have come across (professional organizer, I meet LOTS of stressed, anxiety- ridden, and-or depressed people). There is a change in how counseling is perceived, though it is still a bit slow. However, as Ada K pointed out, it costs money. If you don’t have health insurance, it is prohibitively expensive to go for recurring treatment.

Well, it’s true that only crazy people go to counselors.

But the thing is, we’re all crazy. I don’t mean just those of us in this community. I mean every person everywhere. I would say it is part of having free will, but I’m not sure that not having free will would allow one to be any less crazy.

The real question is how well you handle it. You handle it better with the help of a good counselor.

For me… Well, when I was feeling really bad I didn’t have a therapist. Therapist was, like, stage 2 after getting temporarily well enough to do stuff. But when I’ve had off days, the therapist was still expensive enough (with insurance in Canada) that I would drag myself through a session to avoid Wasting Money. And usually we’d end up talking about something useful eventually. 🙂

as someone with an ED i feel this deeeplyyy

So I guess we’ll be getting Epidemic Flashback stories until the US settles into a New Normal?

I hope not, I’d like to see the plot proceed to a point where something happens on the Ceannic government side of things.

That said, the Epidemic Flashbacks do have a planned conclusion, and they’ll keep running until I get to it. If the timing happens to line up neatly with “80% of the population is vaccinated and US infection rates have dropped below March 2019 levels”, that would be great! But if not, I’m not going to force it. We’ll see.

Kale, you’re an absolute mood right now. I also don’t feel like eating today, but I guess if Kale has to eat something, so do I

Hi there! I think I’ve commented here before but I felt like I should introduce myself? My name is Erynn, I’m a Canadian nonbinary author with no particular pronoun preference, and I have been creeping on this comments section for more than a year. I mean like, I adore this comic (and Cat person) and I always read the comments and have realized at this point that holy crap, I know like the whole community who regularly posts here like a creep. That’s hilarious.

so anyways I swore I’d say something in here next time I had something to add.

this whole strip reminds me of one of my own healthy/unhealthy habits. I was seriously, not eating anything, sleeping all day depressed for a good chunk of my teens, so currently in my life I get some bad anxiety if I start sleeping in regularly or miss a meal. I desperately hate things that FEEL like depression, even if they’re just that I stayed up too late and need more rest, and that sometimes leads to scenarios where I’m not getting enough sleep or end up eating too much because I’m trying to evade that feeling. so, you know, the flipside exists too I guess.

although like Kale, my breakfast is usually drinkable yogurt lol

I love the negotiation here (and the montage main part of the panel)!