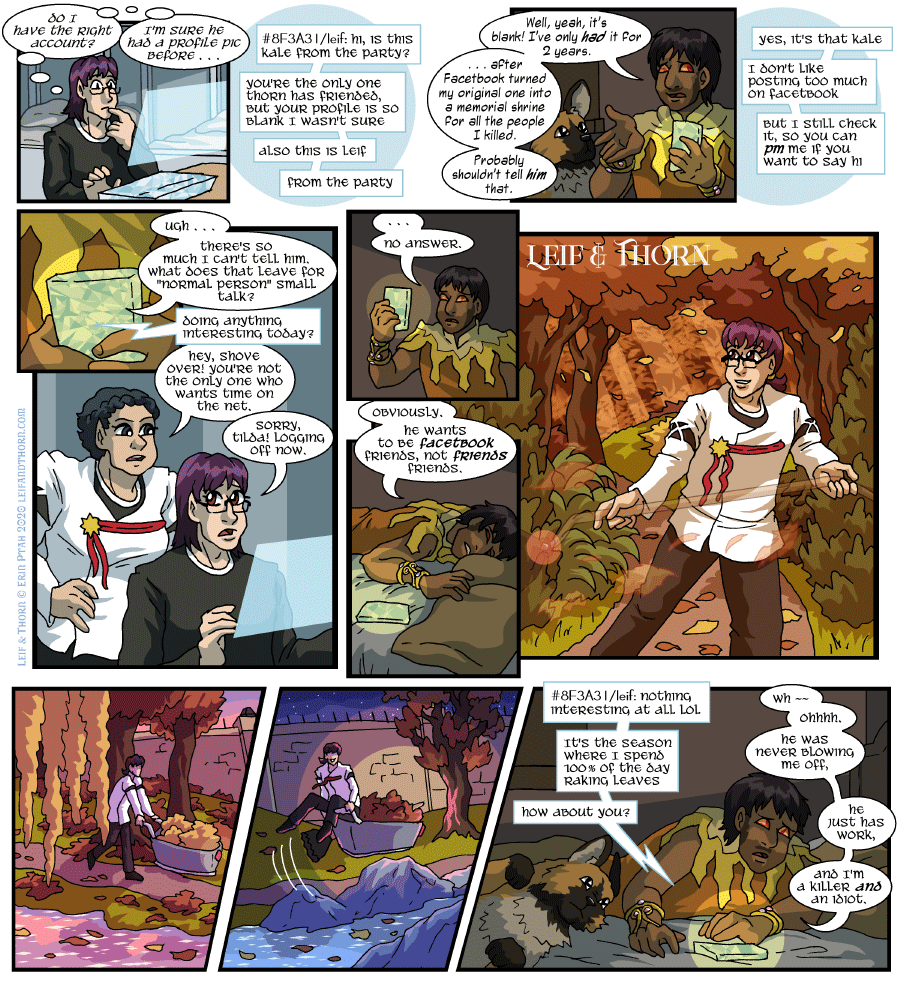 Comparing the panels in this strip to my efforts at “Leif rakes leaves on the Embassy grounds” from back in 2016.

Kale’s offhand comments are in Ceannic at first, but he switches to Sønska once he starts actually responding to Leif.

And since this is one of the lowest-web-traffic times of the year, I’m taking a filler week. Come back Saturday for the return of regular updates, and the rest of the storyline!

Leif (thinking): Do I have the right account? I’m sure he had a profile pic before . . .

#8F3A31/leif: Hi, is this Kale from the party? You’re the only one Thorn has friended, but your profile is so blank I wasn’t sure / also this is Leif / From the party

Kale: Well, yeah, it’s blank! I’ve only had it for 2 years. . . . after Facetbook turned my original one into a memorial shrine for all the people I killed. Probably shouldn’t tell him that.

Kale (typing): Yes, it’s that Kale / I don’t like posting too much on Facetbook / But I still check it, so you can pm me if you want to say hi

Kale: Ugh . . . There’s so much I can’t tell him. What does that leave for “normal person” small talk?

Tilda: Hey, shove over! You’re not the only one who wants time on the net.

Obviously. He wants to be Facetbook friends, not friends friends.

Kale: Wh — Ohhhh. He was never blowing me off, he just has work, and I’m a killer and an idiot.

Enjoy your week “off”, Miss Ptah!

Only as much of an idiot as most other people Kale, don’t worry.

Only as much of an idiot as everyone I know well enough to know if they do that. I know a few people who claim to not be an idiot in that fashion. But those I’ve gotten to know that well fall into two buckets:

I wonder how he justifies riding the hoverbarrow. Knowing Leif, the logic airtight; I’m just wondering what it is.

To be fair, that wasn’t Leif saying that, just some random person from a random other world with hoverbarrows who raked leaves for someone who owned the hoverbarrow he used. But it probably works for Leif, too.

I would say that he is saving time by shortening the path. That’s totally logical and noone can prove that there would be different path just as fast with less fun.

Is… is Kale still partly transformed

As far as we know, Juniper (Holly’s Mom) locked him back down with a new, fancier bracelet, possibly forged from the remains of the two that were cut off. He appears to have at least changed out of the clothes he was wearing to the Kolpovision party.

That said, I’m pretty he’s slept in the same clothes he was wearing for the telemedicine call with his therapist, and it looks like he hadn’t moved all day, which may mean he hasn’t complied with his “one solid meal, one meal-replacement drink” agreement with his therapist… Go get some food and water, Kale!

Laurel. Laurel is Holly’s Mother. I was misremembering a gag about Juniper Sel being mistaken for Holly’s parent.

I loved this page so much. Have a good week ahead!

Kale is too painfully relatable, no wonder he’s my favorite character. Must be the depression.