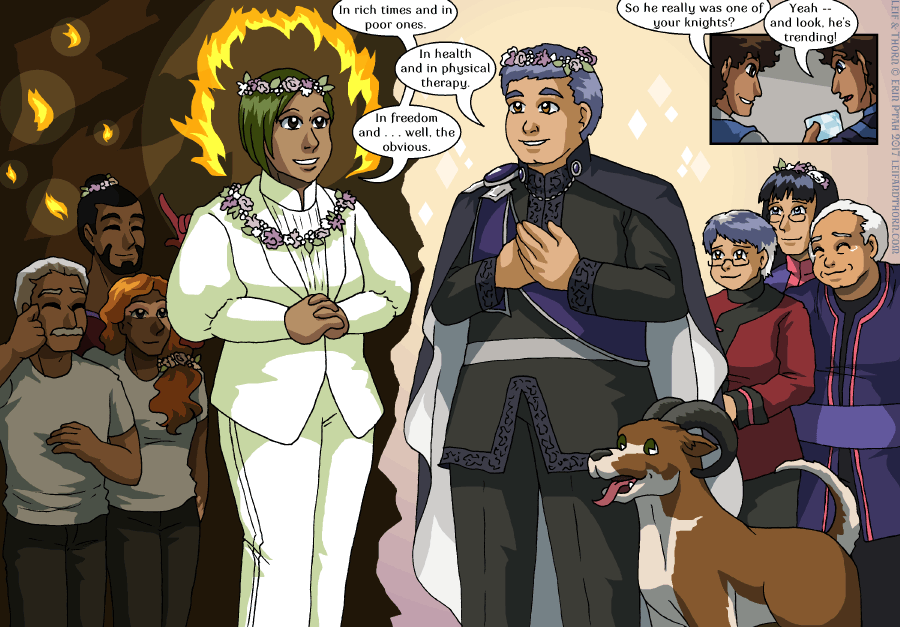 Annie: In rich times and in poor ones.

Birch: In health and in physical therapy.

Tansy: So he really was one of your knights?

So I first found out about Erin’s works around ’07-’08, about midway through my years in high school. Since then, I like to consider myself a steady fan of her stuff even when I completely misunderstand everything that’s been going on because the concepts involved are totally new and never got told to me because they, “weren’t normal” according to my parents. Yeah, real great people.

This strip is the last one I’ll read before shipping out. I imagine that many of you are questioning why I’d still join the military when such a change has taken place. Put simply, the military is an institution that has existed through the bad and good times of our country’s history. It is something that can’t be ignored when things seem bad. I’ve accomplished something just by getting accepted to go to boot camp, and that pride will carry me onward through the next three months. As I said on Cat Person, we can’t just leave the military to those who would stain it with dishonor and moral cowardice.

Please, all of you remember that the military isn’t filled with unthinking drones that blindly obey at the sound of their leaders’ calls. It’s filled with men and women; some know that the world is complex and complicated in beautiful maddening glory. Some are just seeing this world for the first time beyond their small towns and even farms. Do not mark us uncaring or unknowing. Fight back.

1/21/2017 just showed the world that America isn’t out of the fight for itself yet. Congress is inundated with angry calls and messages. Reps are running scared of their own constituents. The money men are realizing that maybe the people aren’t so willing to go back to being complacent. Just please, please remember that there’s people like me in government. People who are still doing their best to learn these various names and loves and lives. People who still want to help however they can, with whatever they have. Keep educating us, keep guiding us on, help us learn to see the sides that we were denied before we started to see the world.

Boss, I just want to thank you. You’ve been patient with me when I didn’t type something down right. Been willing to draw the commissions that I’ve ordered even though you’ve admitted to difficulties in drawing firearms. I can’t wait to return and see just what you’ve done since my departure.

Well, what else can you say at a time like this right? I’m leaving, you’re all (hopefully) staying, and I leave on the scene of a wedding. I’ll take that as the best omen I could for such an occasion. I’ll see you all when I get back. I should have some interesting stories to tell when I do, if you all want to hear.

Like a smart purple pony once said, “This isn’t goodbye. It’s just goodbye ’til next time.”

Godspeed. I look forward to those stories, and I’m holding you to telling them!
:”)

Good luck, especially around the unthinking drones. The mechanical ones I mean.

All the best, Flyboy! Saluting you I’m miles and countries away. 🙂

I’m sorry I got here after your departure. I can’t wait to here your stories when you get back. 🙂 You’re AMAZING! <3

I think that’s a dog. Dogs have horns in Ceannis, right?

[The dog isn’t tagged for this page, btw]