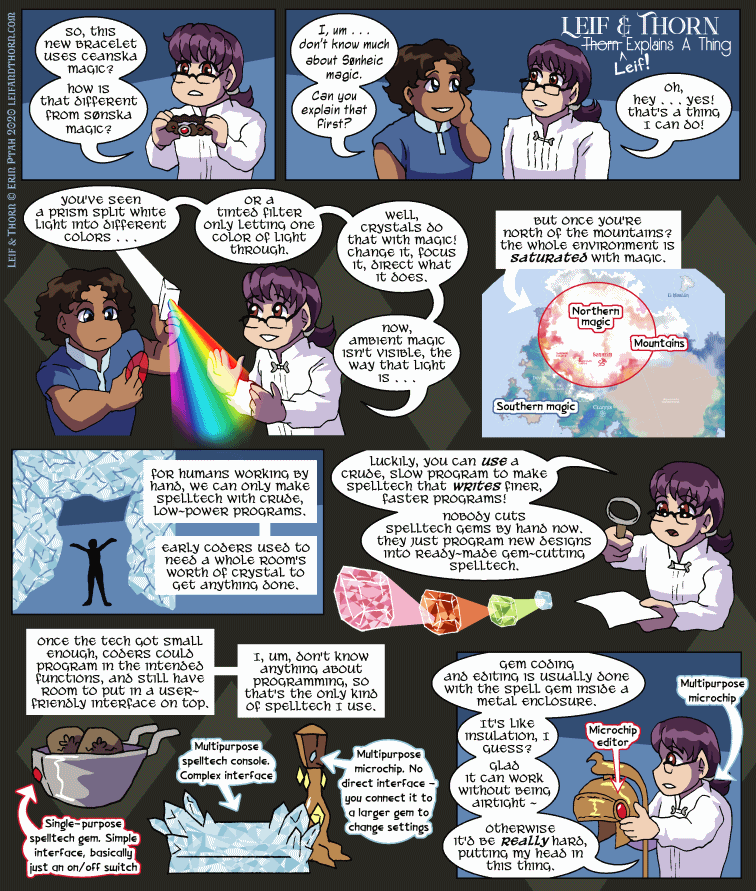 Leif: So, this new bracelet uses Ceanska magic? How is that different from Sønska magic?

You’ve seen a prism split white light into different colors . . . Or a tinted filter only letting one color of light through. Well, crystals do that with magic! Change it, focus it, direct what it does. Now, ambient magic isn’t visible, the way that light is . . .

But once you’re north of the Mountains? The whole environment is saturated with magic.

Leif: For humans working by hand, we can only make spelltech with crude, low-power programs. Early coders used to need a whole room’s worth of crystal to get anything done.

Luckily, you can use a crude, slow program to make spelltech that writes finer, faster programs! Nobody cuts spelltech gems by hand now. They just program new designs into ready-made gem-cutting spelltech.

Once the tech got small enough, coders could program in the intended functions, and still have room to put in a user-friendly interface on top. I, um, don’t know anything about programming, so that’s the only kind of spelltech I use.

[Multipurpose microchip. No direct interface – you connect it to a larger gem to change settings]

Leif: Gem coding and editing is usually done with the spell gem inside a metal enclosure. It’s like insulation, I guess? Glad it can work without being airtight – Otherwise it’d be really hard, putting my head in this thing.

They have computers that can design better computers? Whoa. Do they have Singularity fiction?

Sounds like it’s more processing improvements – like Minecraft-style “use pickaxe to create crafting table to create better pickaxe”, or for a more real-world example, building (and coding) CnC machines to precision-cut tiny machine parts that can’t easily made by hand – it’s just the precision parts you are cutting are the components to an *even better* CnC machine – like the better crystals can store more information even if it takes a human to actually create/input the code

It’s not DESIGN. Just the implementation. For real-life equivalent, consider compilers: practically all programs we are currently using are generated by another program – compiler. That doesn’t mean compiler is able to DESIGN the program: it compiles it from high-level language written by human. However, outside embedded, hardly anyone is now writing directly in assembler, and even assembler is COMPILED to machine code, it’s just that the compilation is very straightforward in such case.

Alternatively, remember that design of today’s chips wouldn’t be possible without lot of software running on previous generation of chips. The ideas need to come from humans, so far – but the chips are too big to be designed manually. Human will design unit from parts, then uses this unit as part on next level, then software is used to find way how to connects those units …

… without the conductive tracks on PCB or how it’s called on chip itself being too long or one longer than other. Damn the edit limit is too short if you decide to add another paragraph …

The hell is that thing on the left, a portable deep fryer?

If you mean the bottom left corner, that’s the wheelbarrow Leif’s always pushing around.

Sonheimer 1: Should we put wheels on this thing?

Can’t tear up the flowerbeds, grass, and/or decorative gravel if it doesn’t have to physically roll through them. Won’t track mud into your potting shed, or get stuck in a rut, or tip over on sloping ground. And the gem takes all the weight, so Leif doesn’t have to lift, he just gives it a smooth frictionless push.

If you have a lot of ground to cover, and the owners care a lot about how nice it looks, anything that makes that go faster and easier is a plus.

Oh that makes a lot of sense and I can’t believe I didn’t notice it before!

… why is the on/off button THERE? I would expect it on or near handles. Hmm, rather near, on handles can be pressed by mistake.