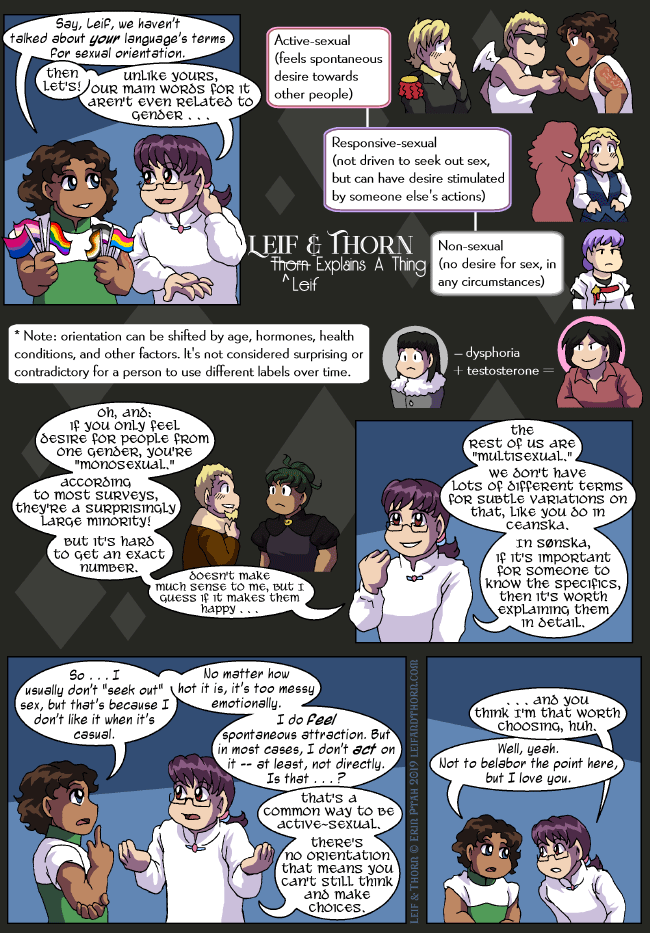 A sorta-belated companion to the Ceannic “words for sexual orientation” strip!

The main Ceannic terms are basically on the same axis as the English ones, they just slice it up at different places. Sønska focuses on a whole different axis. (We can talk about it in English, it’s just less elegant.)

Thorn: Say, Leif, we haven’t talked about your language’s terms for sexual orientation.

Leif: Then let’s! Unlike yours, our main words for it aren’t even related to gender . . .

Responsive-sexual (not driven to seek out sex, but can have desire stimulated by someone else’s actions)

Non-sexual (no desire for sex, in any circumstances)

* Note: orientation can be shifted by age, hormones, health conditions, and other factors. It’s not considered surprising or contradictory for a person to use different labels over time.

Leif: Oh, and: if you only feel desire for people from one gender, you’re “monosexual.” According to most surveys, they’re a surprisingly large minority! But it’s hard to get an exact number. Doesn’t make much sense to me, but I guess if it makes them happy . . .

The rest of us are “multisexual.” We don’t have lots of different terms for subtle variations on that, like you do in Ceanska. In Sønska, if it’s important for someone to know the specifics, then it’s worth explaining them in detail.

Leif: That’s a common way to be active-sexual. There’s no orientation that means you can’t still think and make choices.

Thorn: Well, yeah. Not to belabor the point here, but I love you.

The obvious solution! Although I can’t exactly show it in the SFW main comic…

I’m really curious about where the lines are drawn along that axis. Like, if you experience both spontaneous and responsive desire depending on context, do you label yourself based on which one you experience more often? Is there a word for “I think I’m right in the middle, or I can’t decide which one predominates”?

There’s no hard and fast lines — most people probably experience *some* kind of mix. You’d just base it on whichever one is predominant, or feels more relevant to your life. If you know it shifts a lot, you can say things like “I’m activesexual this week” and people will get the idea that it’s likely to change that fast.

There’s not a single word for “I experience both in equal proportions,” but if you explain it in multiple words, people will understand the concept.