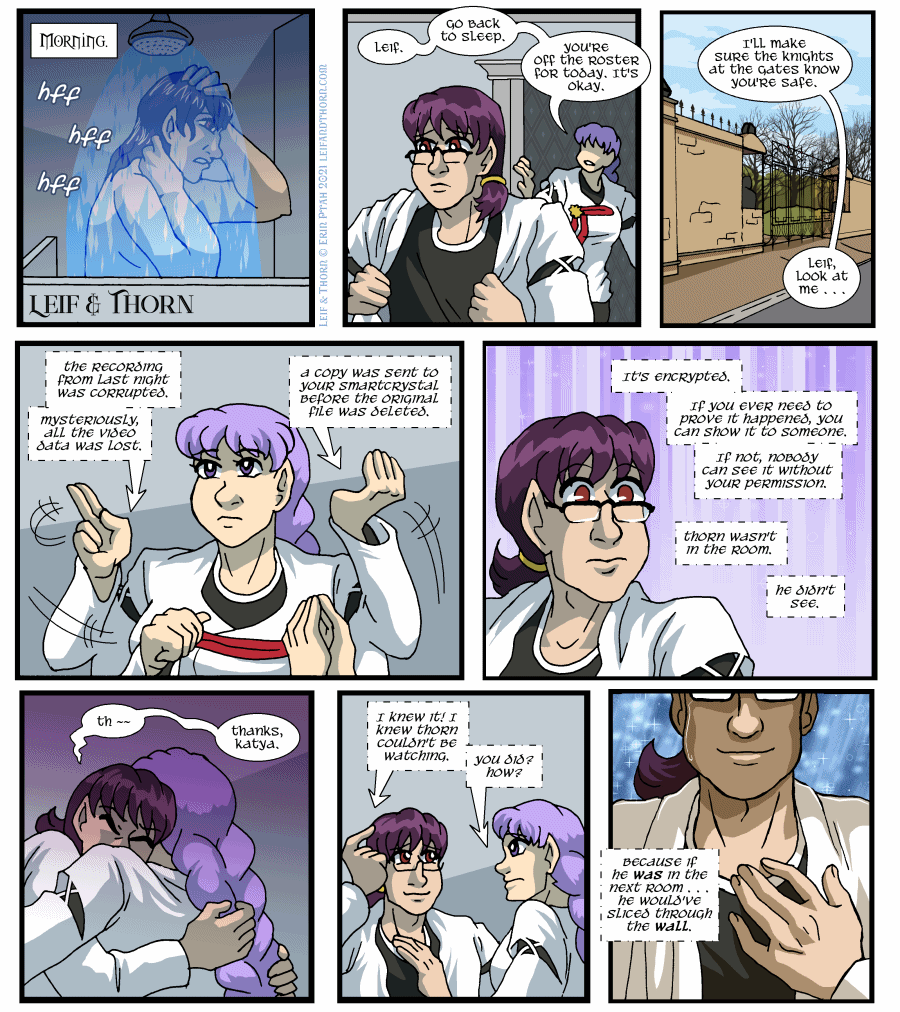 Whoo boy, that was a long and harrowing mini-arc. But Leif is finally out of lockdown! We can go back to doing fun, lighthearted posts on Sundays now.

The last panel is a callback to this strip from Homecoming — that is, volume 1, storyline 1. From “the first time Thorn refers to heartswords, and Leif doesn’t even know what he means” to “Leif making a confident declaration what Thorn’s heartsword could and would do.”

(In other character-development news: Katya correctly guesses that, at this point, she can allude to Seditious Hacking Activity in front of Leif and he’ll roll with it.)

Katya: Leif. Go back to sleep. You’re off the roster for today. It’s okay.

I’ll make sure the knights at the gates know you’re safe. Leif, look at me . . .

Katya (signed): The recording from last night was corrupted. Mysteriously, all the video data was lost. A copy was sent to your smartcrystal before the original file was deleted.

It’s encrypted. If you ever need to prove it happened, you can show it to someone. If not, nobody can see it without your permission. Thorn wasn’t in the room. He didn’t see.

Leif (signed): I knew it! I knew Thorn couldn’t be watching.

Leif (signed): Because if he was in the next room . . . he would’ve sliced through the wall.

Loved it too. Equal parts romantic and badass.

Oh, I continue to love Katya. She’s just so great! I can’t wait to see how all the background stuff you’ve been sprinkling about what Katya’s been up to becomes relevant.

I read through this arc again, and I’m not quite confident I understand all of the subtext yet – is the implication that the *embassy* deleted the video records to cover up the whole interrogation, and Katya’s saving a copy for Leif’s use in (hypothetical) future court procedures and such? Or did she delete the video for some reason?

The guards were predicting the mysterious failure of the recordings: https://leifandthorn.com/comic/leif-in-lockdown-part-7/

Must be unreliable equipment.

That’s the great thing about being the ones who actually get shit done. When the higher ups ask what went wrong, you can bullshit them five ways to Sunday and they won’t bat an eye.

Sure, it’s Sønheim, so the reason Sønheim law would take issue would not be great, but they would at least be problematic for the current establishment. Ludolf being unfit for his high ranking job reflects poorly on the people who put him there and supported him being there. While that sentiment more often than not actually works to keep people like Ludolf in their high ranking jobs, actual hard evidence that they shouldn’t have that high ranking job looks bad for all the high ranking people who kept the clearly unfit person in his job.

That is, when Ludolf is finally displaced from his position, if it’s due to stuff like the recording now on Leif’s bracelet, it could destabilize a lot of the Sønheim government. After all, the people who kept Ludolf in his position were kept in their positions by others, and this crap keeps rolling. Since Ludolf is clearly supportive of the vampires, that is more likely to reflect badly on other pro-vampire elements than the anti-vampire elements, but it could go either way.

Sønheim’s government is bad enough that regardless of how ideally that fallout rolls, it’s very unlikely to be replaced with a truly enlightened government, but anything better than what it currently has is an improvement. At least for a bit.

Sometimes, if a population has enough bad apples in it, a temporary improvement could lead up to something even worse. There’s been a few recent examples of this in actual governments that you might be aware of. Exactly which ones I’m thinking about is off-topic here, but I feel confident that most of you can probably imagine a few that I could be talking about that you agree with. Just assume that I meant those, and don’t discuss the details of them here.

I don’t think Ludolf’s job is SO high ranking. There will be SOME destabilization, especially if some people will jump at the opportunity of other people being vulnerable, but nothing so big as falling government … unless it would be like last drop to be added to already divided society.

There are a *lot* of drops in the already divided society of Sønheim already.

I think, in large part, it’s due to the vampires’ mindset. They do what they want without worrying about the consequences, by and large. For the most part, they get away with this, but that lets the consequences build into something that can actually threaten this. For them, this isn’t a problem, it’s part of what keeps their approximation to life interesting.

But eventually, things will catch up with them to the point where they get deposed. It’s the natural order of things, and why the first vampires aren’t still around. This isn’t something that is particular with Leif and Thorn vampires. Avoiding consequences and letting them build is integral to the very essence of what a vampire *is*. I’m not just talking about their tendency to keep anti-vampire paraphernalia around their homes. I’m talking about the whole drinking the life essences of the living to extend their lives.

Ludolf is not a vampire in the literal sense, but like every Sønheim official we’ve seen of his rank or more, he is in the figurative sense. I’ve gotten the impression that the Sønheim government is filled with people like him. They’re *all* gathering crap like this in their closets.

Oh, look, a not-so-redundant backup of a file, however could that have happened~?

But even with that… she’s still just that little bit surprised that Leif was so certain that Thorn wasn’t there. She hasn’t seen all of what’s gone down between them, after all. But Leif has all the faith in his knight, and well deserved at that.

Don’t worry, it’s actually still redundant. It’s just that the other one was the recording the bracelet itself made, and it’s on the same medium, which isn’t that great of a backup. Because Thorn is a good and caring person, that one is also access restricted to only Leif right now, and only Leif can change that. But it’s less likely for that to happen, because it’s stored somewhere that Leif’s not likely to find without Thorn’s guidance.

Wait, the bracelet itself made a recording? I didn’t get that part. Just that Leif asked it not to shield him, so they wouldn’t take it away from him for good.

Literally in tears from the… Relief? Relaxation of tension? Excitement at what this last panel means?

Leif trusts Katya, in a way that he just didn’t, back when Juniper Mining’s operations hit a tiny little snag.

Leif accepts Thorn really would risk it all for him.

I didn’t know I needed this page this morning, but I’m so glad you’ve granted it to your readers.

> I didn’t know I needed this page this morning, but I’m so glad you’ve granted it to your readers.

The wall AND the overseer