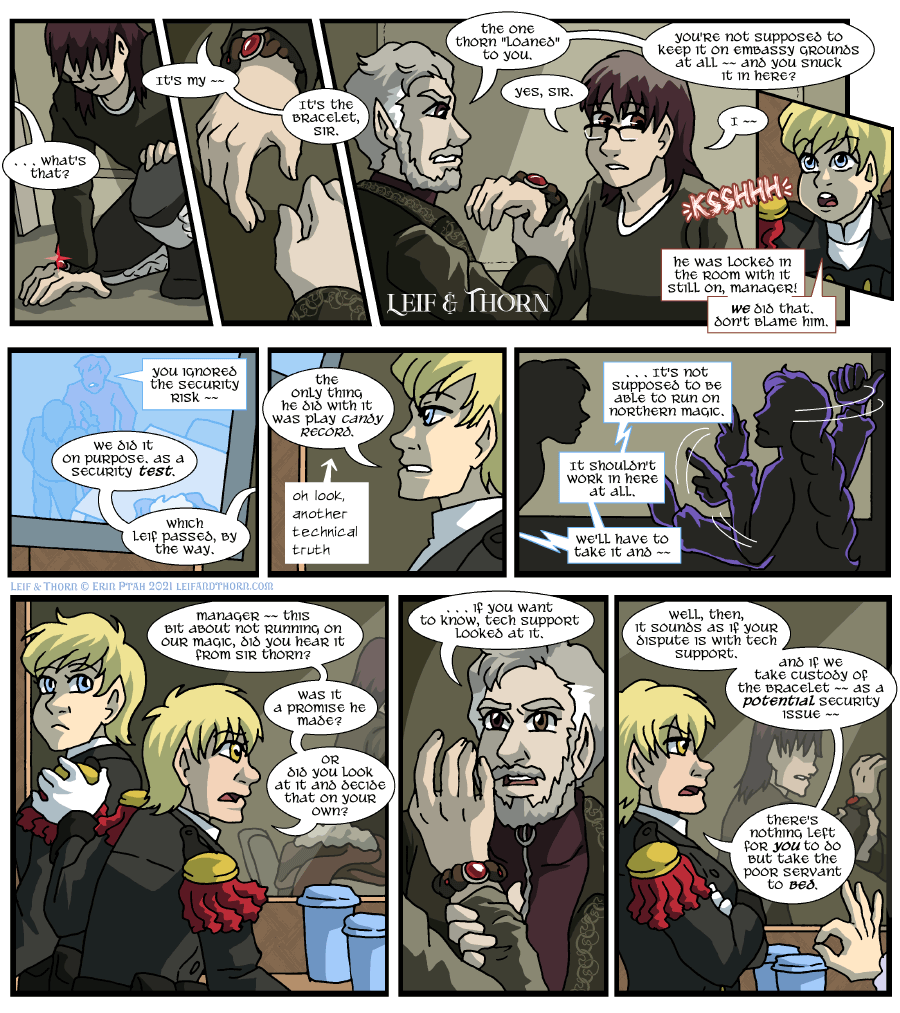 Sometimes I do a good job giving characters unique and distinctive names. Other times I do a whole scene where all the dialogue is between Leif, Ludolf, and Lulen.

Ludolf: The one Thorn “loaned” to you.

Ludolf: You’re not supposed to keep it on Embassy grounds at all — and you snuck it in here?

Róta: He was locked in the room with it still on, Manager! We did that. Don’t blame him.

Ludolf: You ignored the security risk —

Róta: We did it on purpose. As a security test. Which Leif passed, by the way.

The only thing he did with it was play Candy Record.

Ludolf: . . . It’s not supposed to be able to run on Northern magic. It shouldn’t work in here at all. We’ll have to take it and —

Lulen: Manager — this bit about not running on our magic, did you hear it from Sir Thorn? Was it a promise he made? Or did you look at it and decide that on your own?

Lulen: Well, then, it sounds as if your dispute is with tech support. And if we take custody of the bracelet — as a potential security issue — there’s nothing left for you to do but take the poor servant to bed.

Becoming a slave is a more fitting and ironic punishment for him.

You expect there will be slaves afterwards?

Slaves allowed in Ceannis even under diplomatic allowance? No. Slavery in Sonheim because that’s a system that will remain fucked long into the future? I have little doubt.

For Miss Not-Appearing-In-This-Comic, Katya sure is busy here.

How did SHE made the bracelet work? Or did she messed with whatever is preventing southern magic to get on embassy?

Or could her signing be about something else? Does SHE want to take the bracelet into “custody”?

I’m pretty sure she wants Ludolf to not be the one who takes Thorn’s bracelet into custody. Getting it back to Thorn at this point might be a goal, tool… or possibly someone else she knows.

I figured that when Thorn got a *top of the line* bracelet, he went all the way and got one compatible with both sorts of magic.

I mean, if it’s possible to make a compulsion chip work like that, the rest is just a matter of scale (and very expensive magi-engineering).

…do you think Katya wants to modify its programming?

Thorn getting bracelet working under both magics makes sense, but Katya somehow messing with it already could explain her signing. It’s all speculation at this point of course. Looking forward to finding out what it’s about, but it will likely take some time …

I’m fine with Katya’s signs not showing up in the transcription (since we aren’t supposed to know what she said) but I think she should be in the character tags for this page.