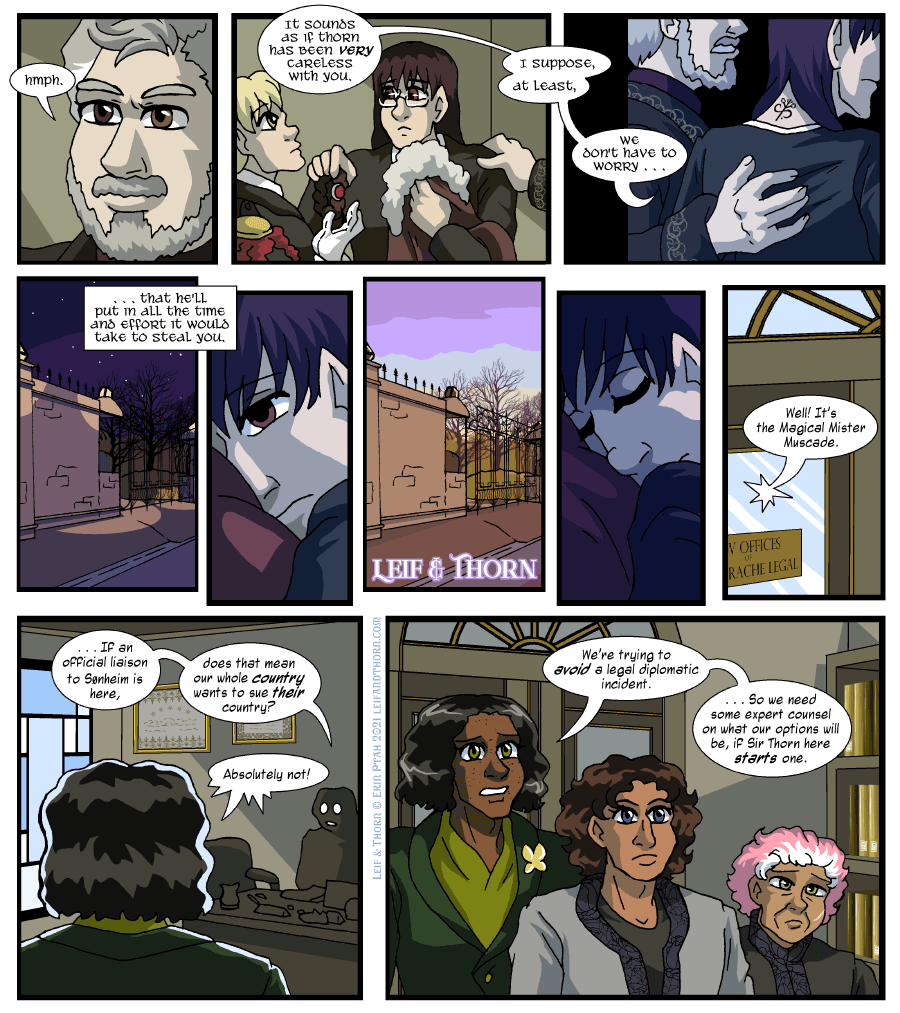 So I drew this strip, then I started to draw a “Thorn interacting with the lawyer” strip, then I realized — hang on, this is a “summarizing the backstory for a new person” scene. I should hold off on that until I need a “starting a new volume” scene.

…which is very soon, since “Leif in Lockdown” is close to the last storyline in Volume 5. So this is your first taste of what’s going to happen in Volume 6.

More on that later! This year we’re still working to print Volume 4 — all the strips are fully drawn and finished, the only thing we need is the funding.

It sounds as if Thorn has been very careless with you.

. . . that he’ll put in all the time and effort it would take to steal you.

. . . If an official liaison to Sønheim is here, does that mean our whole country wants to sue their country?

We’re trying to avoid a legal diplomatic incident. . . . So we need some expert counsel on what our options will be, if Sir Thorn here starts one.

Well, that’s nominative determinism for you.

For people who, like me, had not heard of nominative determinism: https://en.m.wikipedia.org/wiki/Nominative_determinism.

That is nerdily delightful. Also, not infrequent. I don’t know how it plays in, but, my married name gets reactions in my profession, whereas my maiden name (which I had at the time I which I chose my profession) did not. Predestinative determinative nominatism?
… I’m done now 😉

Gerri has such a pretty color palette. I can’t remember, has there been an Explains page yet about how unnatural-by-Earth-standards hair colors are a thing in the L&Tverse? Also do they call their planet Earth as well or another name?

There’s not really a complex explanation for the hair colors, it’s just “anime hair rules, because I feel like it.”

And yes, most languages call it Earth! The Ceannic word more literally translates as “World.” There was a page about planet names back in 2016. Maybe I should bring that back somehow…

Actually, this feels like a great introduction to this topic. I mean, I feel like most people in Thorn’s situation who decided to pre-consult with a lawyer would do that on their own, to minimize the number of people involved. However, that would likely go poorly.

This, on the other hand, is how one does it well. I mean, one starts out talking with the people whose jobs most strongly intersect with “role that should be POed with what I’m about to do if I blindside them with it”, brings them onboard, and then has those folks start the talk with the lawyer – while being present oneself.

Of course, to *do* it that way, one has to have something in mind that they’d actually support, if not officially. I mean, with what they’re about to talk about doing, the one thing that I feel confident in saying Magical Ebony absolutely cannot do in the upcoming discussion is to tell Sønheim, “I fully support Thorn in everything he’s done, especially this last thing that has you guys so upset. The government of Ceannis is very pleased with his actions.”

Exactly what Magical Ebony *can* say is a matter for a lawyer. Fortunately, we have Unidentified here to handle that aspect of things.

Sure, there are a lot of other people whose jobs would probably also require them to be upset with Thorn, but most of them have enough concerns they wouldn’t need to be very involved. They’d also likely need to have some concerns of a broader sort, such as determining “are the knights a problem in general?” Magical Ebony’s focus will be on the particulars of the current latest Sønheim incident, which basically means Thorn, Leif, and the Sønheim embassy. Sir Geranium’s focus will be on the knight who did the thing, and to a lesser extent, his team leader – oh, wait, same person.

I’d try to counterpoint with various close contenders, but there really aren’t any that come to mind. This is possibly because Sir Gerri goes all the way up to Olive Romarin to get confirmation that Thorn can hire a servant to bake him a pie, rather than someone else who might possibly be asked why they didn’t know what Thorn was up to without having an answer like “I have an entire country to run”.

I’m certainly not complaining – Sir Gerri rolls the way Sir Gerri wants to roll, and I’ve got no objections to it. I’m just sayin’, so you know, you know?

On another note, I feel like Unidentified sounds a bit unusual for a given name, but thinking about it more, there are definitely a lot of unidentified plants out there, so it actually works quite well in the theme. Also, I’m pretty sure you didn’t mean it that way, but I’m still enjoying taking this and running with it.

This is an excellent and astute recap of everything that brought Thorn here!