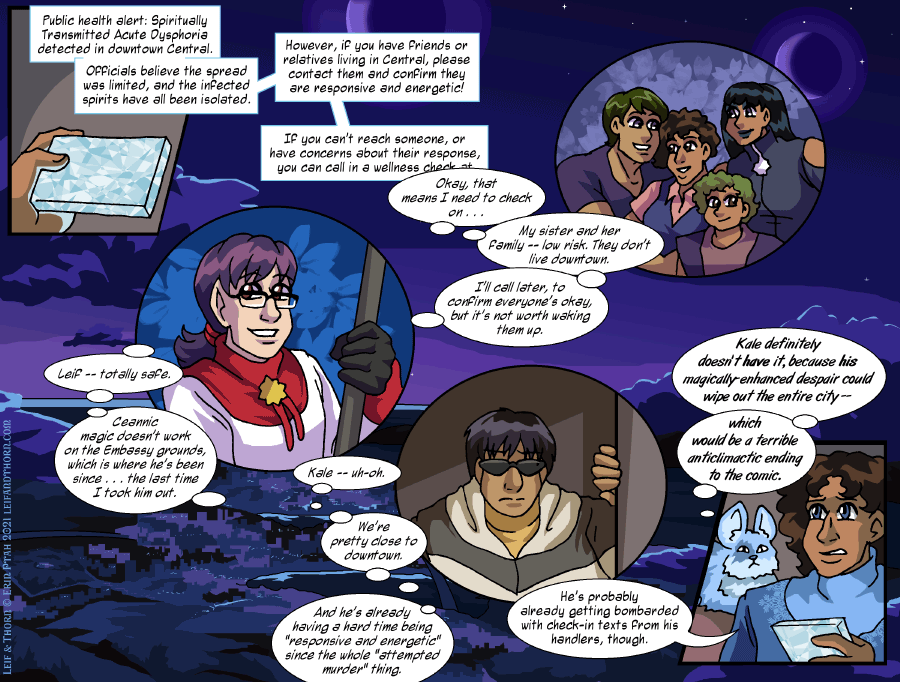 Public health alert: Spiritually Transmitted Acute Dysphoria detected in downtown Central. Officials believe the spread was limited, and the infected spirits have all been isolated.

However, if you have friends or relatives living in Central, please contact them and confirm they are responsive and energetic! If you can’t reach someone, or have concerns about their response, you can call in a wellness check at

Thorn (thinking): Okay, that means I need to check on . . . My sister and her family — low risk. They don’t live downtown. I’ll call later, to confirm everyone’s okay, but it’s not worth waking them up.

Leif — totally safe. Ceannic magic doesn’t work on the Embassy grounds, which is where he’s been since . . . the last time I took him out.

Kale — uh-oh. We’re pretty close to downtown. And he’s already having a hard time being “responsive and energetic” since the whole “attempted murder” thing.

He’s probably already getting bombarded with check-in texts from his handlers, though.

Tiernan (thinking): Kale definitely doesn’t have it, because his magically-enhanced despair could wipe out the entire city — which would be a terrible anticlimactic ending to the comic.

I’m sure he wouldn’t mind a check-in text from you Thorn.

Text him! Text him!

Gotta love Tiernan’s complete disregard for the fourth wall there.

Also, being a good employer, Thorn should probably check on his knights.
…and I’m curious of what he’d think of some the responses he’d get…

Breaking the fourth wall is kind of Tiernan’s job

This is a perfect and adorable Tiernan.

He should, but I think he should explain the situation to embassy first. And possibly do the check along with telling them new orders.

I know Tiernan is probably joking when she thinks “his magically-enhanced despair could wipe out the entire city”, but now I can’t help but wonder if deep enough despair somehow circumvents the power blocking cuffs and…

Dragons are when a bird of prey eats a bunch of corrupted spirits.

A Sea Serpent is what happens when a fish eats a bunch of corrupted spirits.

What happens if a magical girl attracts a bevy of Whispered Spirits of their own extant alignment?

First thing is that humans can’t be corrupted like animals, there was a bonus page about whispers that explained this. Second that other magical was fire mage using fire spirits to spread the whispers so not sure they would effect Kale. So yeah I think it is just a joke but if Kale was not power blocked and got the whisper and this some how made him use his powers to touch peoples minds that would be bad.

We know that powerful enough magical people can overwhelm one power blocking cuff. And If Magical girls work like in anime, emotions make you stronger. And Sadness is an emotion. So the resulting powerup might overwhelm the two cuffs. At least enough to damage them and get free.

All I’ll say is, Tiernan is not joking…

In that case, his handler is probably already incoming with whole team. Just in case.

I started out having this thought, but got distracted by something else before getting to the comments. By the time I got here, I had another thought. I don’t expect Erin Ptah to comment on this either.

What if, having seen how Kale responded in a crisis in which his bracelets were cut, his handlers gave him new cuffs that have some kind of emergency override that allow him to use his powers in a narrowly-defined crisis situation? I’d imagine that, much like Leif’s chip, said crisis logic would have to rely on Kale’s mental state to determine the existence of said crisis. I could imagine having the Whispers could trip that, and boom, Central’s out of commission.

So, gonna ask a blunt question: Can STAD lead to suicidal actions?

I’m going to guess that STAD is the kind of depression that’s so severe one can’t get up the motivation to commit suicide. But it could potentially cause one to disregard the need to eat or drink, so in a sense, kind of but it takes a while.

That said, it’s probably something one has to worry about when curing STAD, because, much like chronic depression in our world, if it just lifts a little bit, that’s more or less when suicide happens.

That’s why so many suicides happen when their loved ones had the impression the depressed person was getting better. They were, it’s just that’s the most dangerous time. The thought process is, “I have motivation again. But for how long? I can actually do something about this now.” At least that was mine. Fortunately, I had friends who understood leaving depression can be like that.

The situation with curing STAD would be different – they KNOW it won’t return. Or, well, if they don’t, just telling them should be enough. Also, I think that curing STAD won’t lift you “a little bit” but almost to normal.

(Still, maybe it is something they should be careful about, especially when someone who is already not ok catches STAD.)

That happened to Rowan in the flashback.