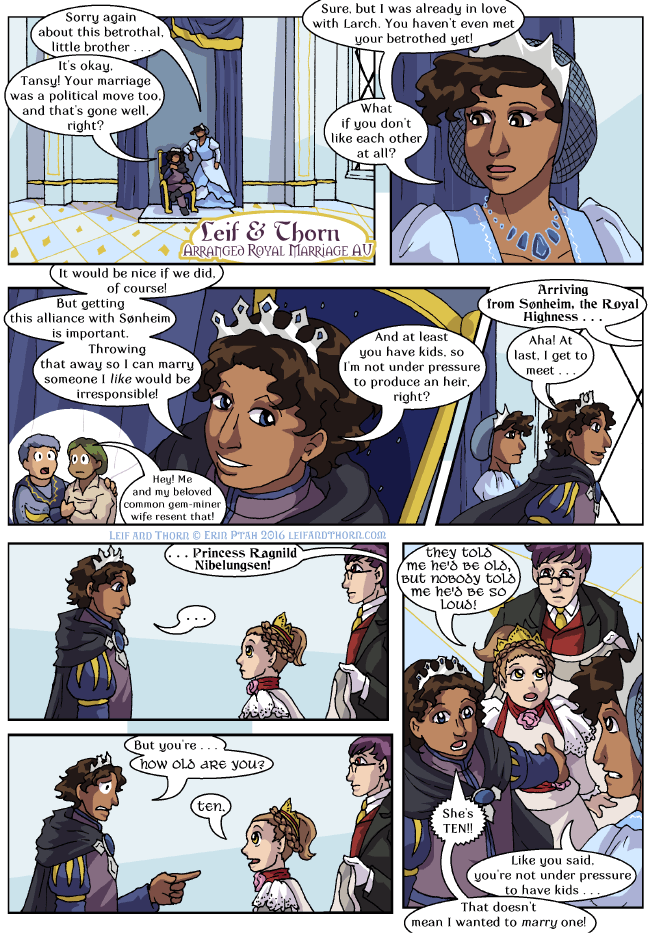 Thorn: It’s okay, Tansy! Your marriage was a political move too, and that’s gone well, right?

Tansy: Sure, but I was already in love with Larch. You haven’t even met your betrothed yet! What if you don’t like each other at all?

Thorn: It would be nice if we did, of course! But getting this alliance with Sønheim is important. Throwing that away so I can marry someone I like would be irresponsible!

Birch (footnote): Hey! Me and my beloved common gem-miner wife resent that!

Thorn: And at least you have kids, so I’m not under pressure to produce an heir, right?

Tansy: Like you said, you’re not under pressure to have kids . . .

Thorn: That doesn’t mean I wanted to marry one!

…now I’m just wondering how political marriages work in a world with no homophobia.

I’d say it probably doesn’t change too much, given that an heir is usually a requirement. If it isn’t though, well, they may just decide to throw gender preferences out the window entirely and try for whoever’s most advantageous.

After all, it’s all appearances

Well, in Dragon Age: Origins they addressed (in a codex) the fact that, in Ferelden at least, since there was no stigma for homosexuality and minimal/no restriction on gender roles, the only real expectation was that at least one of the kids is expected to produce an heir to continue the family, but other than that you can marry whoever you want to.

At least she’s not a vampire, Thorn.

Or… well, you get the idea.

I’m not sure if the message here is “if you don’t worry about things, the universe will provide things to worry about,” “pay attention when your siblings are apologizing to you,” or just “read the fine print before you sign the marriage contract”

“Today on Ceannis News Network, a special on why nobody is allowed to be on the board of both an adoption agency AND an internet dating service. It’s the law. ThisMessageHasBeenBroughtToYouByTheCommitteeToReElectOliveRomarinAndTheNationalPieCouncil.”

Edit: “and the national pie council”

I was going to say that it kind of defeats the purpose to have it run off the side of the box, but actually…

… we can only hope that they didn’t forced them to have sex immediately after wedding.

Child brides and grooms happened a lot throughout history, and in some places still do. Take China for instance: At certain times, it wasn’t uncommon for marriages to be arranged when kids were 11 years old. The bride would go to live with her in laws, but they had separate terms for “new” married couples that indicated they were not sleeping together.

I’m not an expert, but I do believe there are several famous examples of a child being married to an adult for political purposes in the west, especially the middle-ages. It was also possible to have a proxy marriage, meaning that a couple who had never met would be legally married (I think Marie Antoinette was married this way at first.). The general expectation was that the couple would meet when they were both old enough to produce children themselves

And yes, it was often creepy.

Yes. In fact, it still happens today in some parts of the world, despite it often being illegal in those countries.