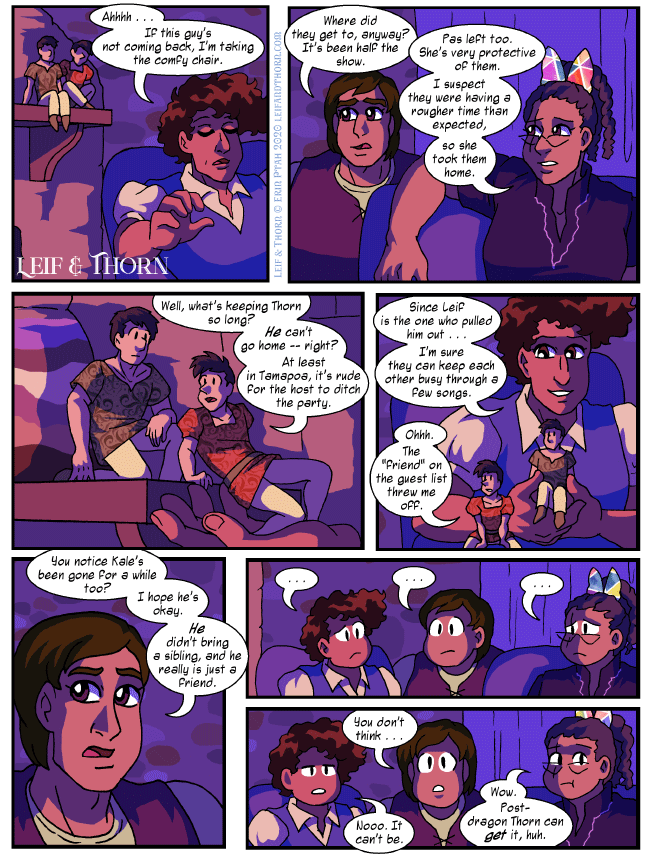 Well, at least “Thorn has two hands” is a safer guess for everyone to make than “Thorn is in a highly-classified showdown with a secret agent and a reformed supervillain.”

Unrelated: if you were trying to get someone hooked on Leif & Thorn, but you could only show them a single strip, which one would you pick? (If you have a few top choices, feel free to post them all, and ask the crowd to help narrow it down.)

Tansy: Ahhhh . . . If this guy’s not coming back, I’m taking the comfy chair.

Larch: Where did they get to, anyway? It’s been half the show.

Violet: Pas left too. She’s very protective of them. I suspect they were having a rougher time than expected, so she took them home.

Mata: Well, what’s keeping Thorn so long? He can’t go home — right? At least in Tamapoa, it’s rude for the host to ditch the party.

Tansy: Since Leif is the one who pulled him out . . . I’m sure they can keep each other busy through a few songs.

Mata: Ohhh. The “friend” on the guest list threw me off.

Larch: You notice Kale’s been gone for a while too? I hope he’s okay. He didn’t bring a sibling, and he really is just a friend.

Violet: Wow. Post-dragon Thorn can get it, huh.

It’s a weird pick, but probably this one! The subversion of typical ‘dance around the romance’ thing is nice; stories that fumble around “will they or won’t they” for their whole run bother me.

Similarly, page 63-64 of Summer Sunshine. It’s maybe not the best place to start someone… but it’s the bit that first REALLY hit me in the emotions.

I’d need to think about what strip to show people that really encapsulates L&T, and I’d probably have to agree with Shard up there, but the strip I’ve probably shown people the most out of context is https://leifandthorn.com/comic/time-and-tides-1533/, if that helps.

I’ve also linked this sketchbook a couple times because it was relevant to my friend group: https://leifandthorn.com/comic/shades-of-they/

Hey, the Shades of They is the one I’ve shared the most too, lmao

So there’s a lot of strips I could choose, obviously, but for strips not featuring Leif or Thorn I think these two with Cedar are great:

In these two strips it establishes how magical transformations work, and that this is a modern setting. It also very quickly tells you Cedar is a child actor who has been controlled so much he can’t even recognize his attraction to someone else- which is the kind of heavy topic this comic often deals with. Also boner joke that demonstrates the humor!

I don’t know that it’s great as a stand-alone but I think it works well enough.

Well, starting from the beginning, this is the first strip that I thought of: I Got Eight Problems 4/27.

This one would certainly get me interested enough to look at more. I don’t think it was the one that got me hooked, though.

Well to the best of my recollection I was hooked by the time I got to this comic, and what got me interested was Chris Baldwin over at spacetrawler.com giving a shout out.

Going by what would’ve most reliably sucked me in, I’d probably pick a Thorn Explains. Can’t currently decide between about half of ’em, though.

I understand I’m in minority, but I’m glad I’m not only one who has other reason to read this than the romance or LGBTTQQIAAP+ inclusion.

I would also probably use some of the Q&A strips – best would be probably https://leifandthorn.com/comic/thorn-explains-magical-girl-costumes/ because it shows not just the mechanics but also meta-mechanics: lot of magical girls have stuff like “heeled shoes with balance and grip” but they rarely ACKNOWLEDGE that it’s part of the magic. Or, like, maybe the whole section: https://leifandthorn.com/storyline/sundays/thorn-explains/ ). They are good (and yes, might suck me in) and while there could be strips even better to show, I wouldn’t have them ready. Which one is best would probably depend on context anyway.

… two links are too much?

That’s common with anti-spam comment or forum software. I’m not sure why excluding the site itself, or at least the author-contributed portion of the site, is such a rare part of that software. At least here, if I recall correctly, the software shows you your post but just marks that it’s waiting for moderation, rather than hiding it completely, like some other comic comment software does.

The worldbuilding is ALSO excellent, but I just cannot get enough secondhand emotional catharsis.

I would absolutely pick Thorn Explains Clothing and Gender for most of my friends, and my sister. For my dad and my non-queer friends, probably the Thorn Explains about long-runners, or that one short strip where Blush Noisette explains what happens to “little ancestors” who are someone else’s ancestors. Or maybe Cymbeline awakening and going “oh, THAT’s who I am now!”

Lots to like in this one strip:
Tiernan
Glimpse of Kale backstory which would be really relevant to anyone new to the current story arc
Reference to the secret order of monster hunters
Thorn being both hospitable and insightful
Sly reference to LGBT slang

It discusses actions that took place in a just finished arc that might tempt people to go back and read up, and anyone who got curious enough to read the next few strips would quickly come across Thorn being showing both guile and martial prowess, along with drama, angst, and Niamh.

If I recomment the comic to someone, who’s not that into bi language, id would be this strip: https://leifandthorn.com/comic/homecoming-524/
Because it’s just lighthearded and fun.

And I would say, that these strips are from 2015 and that you have improved a big lot since then.