You get both pins, all the digital swag, and a cameo appearance in the comic of your choice! In the sketch bundle, there’s also custom art of your very own Puppy or Kitty. (Or alternate critter of your choice.) (Pokémon are a valid choice.)

The highest bundle has free shipping to anywhere. Non-US readers, give it a look.

Each tier is available to less than 5 backers — the good news is, with the campaign two-thirds funded, we only need a few more to push us over the funding goal.

The deadline is this Thursday, so don’t wait too much longer! 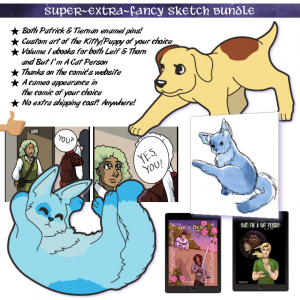 Juniper: Thank you for waiting, officers. Unfortunately, I can’t provide the kind of help that Marula was hoping for. Which she realized almost instantly, and I figured out . . . eventually.

For the record, I don’t think she murdered those kids. But I don’t have any useful evidence, so . . .

Officer: Actually, we have good news!

It’s an ongoing case, so I can’t give specifics — but we just heard we’ve found a likelier suspect. So we’re going to release your colleague very soon . . .

Oddly enough, there are some people here who want to speak to you first.

Wait… how stabby is THEIR heartsword?

Not very. D’s heartsword is an axe. More choppy… though it does have a pointy bit.

What about Juniper’s backsword?

More slashy than stabby but a fair amount of stabby.

Well this can only end sell /sarcasm

I super love this person’s design. Have we seen any other magicals with wings? Or are they the first? Either way, love it.

Thorne Raifort has them! Nobody more major, though.