Aaaand once again, the medal for Outstanding Performance in Narrative Prediction goes to Khyrin!

In other news: do you miss Kale? Itching to get more Kale content in your life? Good news: Patreon supporters get early access to a bonus strip with Kale. 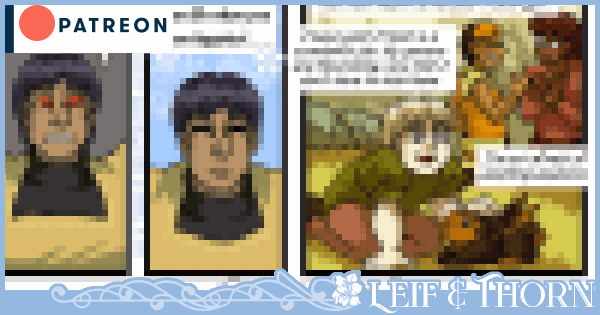 The magical attack wasn’t your fault. It wasn’t your job to stop it. You survived. That’s what matters. And you know something else? You’re stronger than you think.

Oh my god, that is the saddest thing I’ve ever seen. Somebody get this man a therapist, stat.

Painting broad, possibly over-simplified strokes here. When someone witnesses an attack, big or small, and don’t have any stakes in the conflict, they tend to associate with either the victim or the aggressor. Those who identify with the aggressor by default look for the justifications for why the attack happened, and get a rush of satisfaction when they’re convinced that the victim deserved it, or when the aggressor is dealt with to balance the scales. That first speech is clearly the stock line when that aggressor is brought to justice.

Rowan is clearly in the second group, and that’s a good thing! He’s been hurt in the past, and it might influence him now, but he’s clearly at peace with his past, not someone hungry for an excuse to dish out vengeance, but someone eager to step in and help the survivors.

In times past, a lot of people tended to associate with the heroes of the story. I’m not sure how statistics on that are now that a lot more people realize that in a lot of these shows, these are dark heroes at best and often times “heroes”.

I really feel it’s sad that the heroes we’ve been taught to respect are not actually all that heroic. Sure, cops risk their lives on the job all the time, but much of that risk isn’t in the service of the people. I don’t know statistics on what portion of it is, but that any of it is opposed to the people is seriously messed up.

I feel like I should’ve caught on much earlier. Shows painting cops as heroes are much more common than shows that say the same about EMTs or firefighters. Looking more in general, heroes are more frequently being depicted as having a fighting role, especially one fighting bad people.

Sure, we’ve had a lot of medical dramas in my lifetime. But we didn’t have any of these until after my parents were born, and considering how traumatic a lot of medical care is for small children, this is definitely a profession that needs some advertising. EMTs feature only lightly in such works, they just deliver some of the injured and then leave. The first show focusing on EMTs or firefighters that I’m aware of happened entirely within my lifetime.

Admittedly, I have apparently joined the ranks of the elderly at some point. I’m not sure how that happened. My father seems to be completely unaware that it happened, to him, I’m still a confused child. :/ Admittedly, that might just be him playing at his new role, the daft old fool hooked on conspiracy theories.

Thank God I was wrong.

Thank God you were wrong… so far.

Our Esteemed Author has put the “Dramatic and Painful” card on the table (In Defense mode!) and there was something funky going on with Atarangi and Violet while they were proactively pursuing problems to prevent.

Strange that the actress isn’t named in the transcript. Her character is named, and she’s heavily implied to be the colleague who Archie watched over on wing growth, which inspired him to offer support in Rowan’s time of need.

Also she’s basically the face of the show, and she’s close enough to Archie that she’s willing to humour his request to “say the thing!”

It seems to follow typical tag/naming conventions for this comic. I’m pretty sure the same thing happened with the vampire servants as well as other minor characters. I think it’s related to the tagging system, at least partially.

IDK I just don’t think she’s important enough for that unless this storyline goes differently than I think it will. This is probably her last major appearance and most of that stuff was off-screen.

I am assuming this isn’t a call back to previous revealed stuff and more of lead up…unless my memory fails me again.