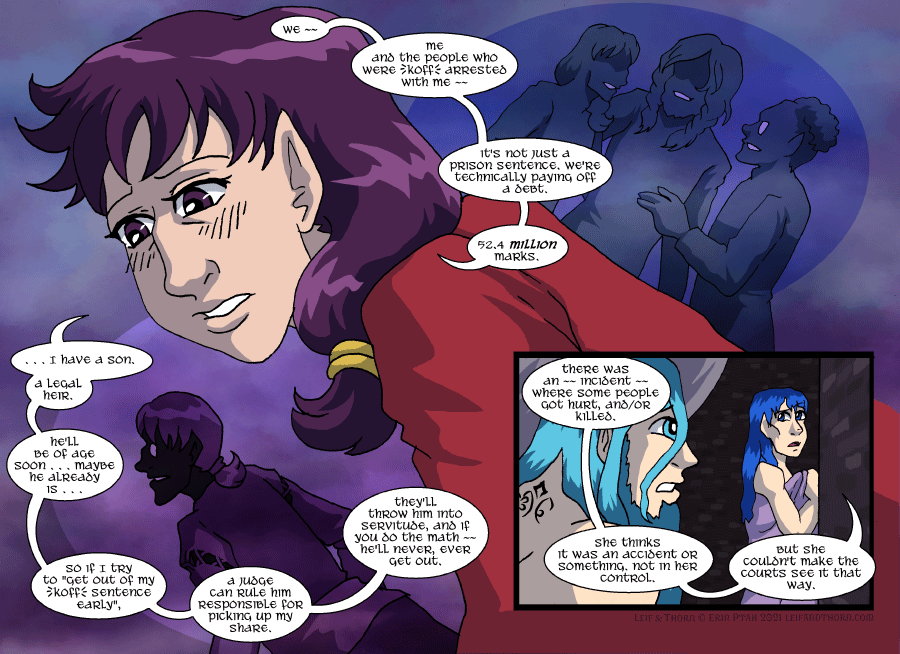 Valrún: We — me and the people who were {koff} arrested with me — it’s not just a prison sentence. We’re technically paying off a debt. 52.4 million marks.

They’ll throw him into servitude, and if you do the math — he’ll never, ever get out.

Blue: There was an — incident — where some people got hurt, and/or killed. She thinks it was an accident or something. Not in her control. But she couldn’t make the courts see it that way.

Well, I guess we shouldn’t get too attached to Val, then 🙂

Well, hang on, isn’t Leif already in service at this point? So is she wrong, or is something screwy going on? Or have I just got my timelines mixed up? That’s always possible.

we’re in a flashback! the Brumavirus outbreak was 8 years prior to the main story, so I SHOULD have seen this coming, but…nope

I checked the timeline on the wiki and he definitely is. He’s been one for about 2 years at that point if I read it right. We also saw him at Rocky Rapids at the beginning of the pandemic. So Valrún was definitely deceived here and Leif is probably being lied to as well.

That was what I thought! Thanks for the confirmation.

Yeah, it’s been implied that Leif’s known since he was a kid that he was going into servitude as soon as he was of age, which would mean the government never actually planned to let him off the hook, whatever they told his parents. (Which leaves open the question of what they got out of his parents by lying to them that they didn’t already have…)

Also, it appears they don’t let ’em have calendars in Potter’s Field, if Valrun’s that fuzzy on how old her kid is right now. 🙁

When Leif thinks about what his parents did in this strip he’s so young in his memory. If that was the time Valrún was imprisoned that would be in the early 1350’s (Sønheim calendar). The Bruma hit in 1364 so in this storyline she would have been in prison for more than ten years. Quite a time to get fuzzy 🙁

Hmm… servant smuggling, maybe? And a boat tipped or a tunnel collapsed or something? It would make sense to me if the loss of those lives were turned into dollars. Or marks. I also wouldn’t be surprised if they pressured a young and groomed Leif into agreeing to servitude before he was forced by the law. What’s the mark to American dollar exchange rate?

Oh that’s a good theory! The loss of “property” would definitely have a high cost.

It’s either lot of servants dying or there was something else which cost that much money and the people are important just for other people, not for the law.

I’m going to guess wrecker most likely means “saboteur” then. I wonder if that was the intention or if it was actually an accident?

Some government official: “If you die your son will be placed in eternal servitude” + “if you go into eternal servitude you can pay off your mom’s debt and she’ll eventually go free” = TWICE the free labor! There are no ethical quandaries here whatsoever 🙂

Odds are, he’d have ended up in servitude regardless – if her leaving early means he’d ‘never ever get out’, the remaining share is big enough she wouldn’t either, and there will still be some debt left over. May as well get him started on it as soon as possible, and maybe if she lasts long enough he might have some life left by the time the debt is paid (assuming they’re on the up and up at all).

Not an assumption I’d bet on, but not explicitly impossible.

Unless Leif’s Other Progenitor is the one who broke “the agreement”, and Valrún was never informed.

“The Judge” straight-up lying doesn’t feel right from a story perspective to me. I think it’s more likely that the Other Parent died or was killed and Valrún was never informed, while Leif either forgot or was simplifying for Thorn because he knew it would just make Thorn angry/sad to learn there was ever a time when Leif didn’t have The Debt.

I would consider most likely “The Judge” lied just by omission. They explained her how if she tried to get out Leif would inherit her debt but left out the fact that even if she doesn’t there will still be some debt left for him.

It is however possible that without her (or the other parent) dying Leif would have chance to get out of it. Not that big chance, though – most likely, there is enough debt for servitude-to-death for all of them.

Except the Margaid was a Ceannic ship and Sønheim is effectively landlocked, so it was probably not traveling in any flavor of Sønheim territory.

I doubt it. Leif never heard about the disaster before.

1. Yeah she probably dead, AsimovSideburns made a good point about the anime mom side ponytail of death yesterday.
2. Leaning towards “somebody explicitly lied to Valrun and/or Leif”, because hah, when is Sonheim not terrible.

[checks] Okay, the original debt Leif is paying off is also 52.4 million marks. https://leifandthorn.com/comic/summer-sunshine-6984/ And it’s grown. Boy!!!!!!!! I don’t know what this means but I don’t like it.

I don’t know that it’s ever been confirmed that it’s grown. “The original debt was 52.4 million and I don’t want to look to see how much has been paid off because that’s going to be super disheartening” is also a sensible read of that strip (and is what I’ve always assumed).

This doesn’t say that it’s grown, only that it’s an ongoing expense: https://leifandthorn.com/comic/an-incredibly-platonic-shopping-day-1414/

She’s alive to save Leif from servitude but he’s already a servant. That’s really tragic but also very compelling.

I haven’t been following this story for self-care reasons, but holy crap, maybe I should be.

Late to the commenting but the first time I read Wrecker I assumed it was something like Luddite – Originally they were textile workers / workshop owners who hated / feared the new automatic looms as they would be replaced by machines – which they were.

I guess IF that is what Purple & her friends were then they could have [a] destroyed a LOT of VERY valuable tech and/or [b] the destruction of this tech had an unintended side effect of also killing people (like arson, thinking a building was empty but there were people inside)

So Lief is a Slave pure and simple