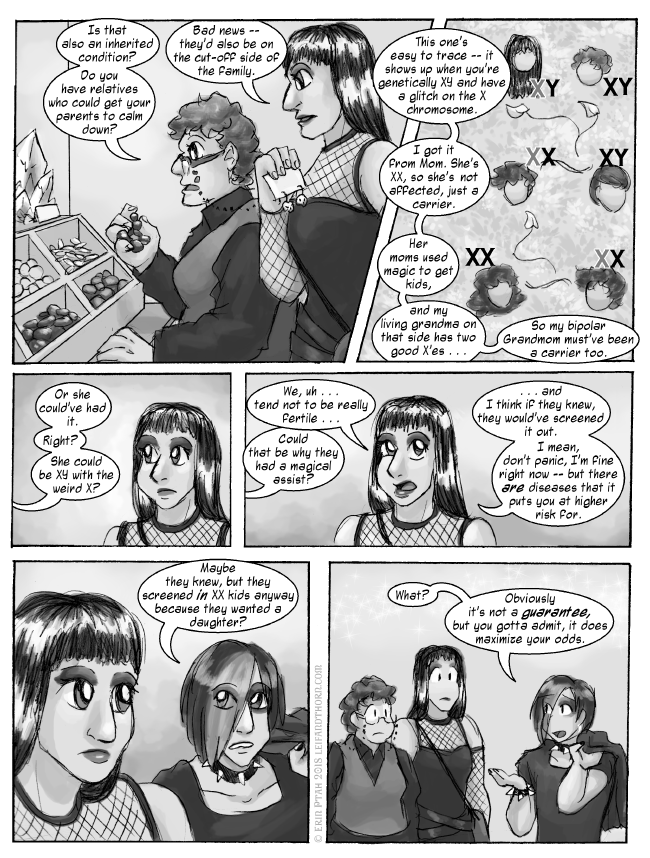 Hazel: Is that also an inherited condition? Do you have relatives who could get your parents to calm down?

Hyacinth: Bad news — they’d also be on the cut-off side of the family.

This one’s easy to trace — it shows up when you’re genetically XY and have a glitch on the X chromosome.

I got it from Mom. She’s XX, so she’s a not affected, just a carrier.

Her moms used magic to get kids, and my living grandma on that side has two good X’es . . . So my bipolar Grandmom must’ve been a carrier too.

Hazel: Or she could’ve had it. Right? She could be XY with the weird X?

Hazel: Could that be why they had a magical assist?

Hyacinth: . . . and I think if they knew, they would’ve screened it out. I mean, don’t panic, I’m fine right now — but there are diseases that it puts you at higher risk for.

Vine: Maybe they knew, but they screened in XX kids anyway because they wanted a daughter?

What? Obviously it’s not a guarantee, but you gotta admit, it does maximize your odds.

Saw this on Patreon earlier and the family tree going up still threw me again. Although it does line up really well with the word bubbles…

I’m a bit confused by what Vine is saying. If the parents are both women, wouldn’t all of their children be XX? Or is magical assisted conception in this universe able to produce a Y chromosome from an egg?

As the family tree indicates, one of Hyacinth’s grandmothers was also XY intersex, just like her. That provides the Y chromosome needed for Thorn to be XY. Since the genetic defect that causes intersex individuals is on the X chromosome, if they only had XY offspring the gene could not be passed on. I think Vine is saying that Hyacinth’s grandmothers would be much more likely to get a daughter if they allowed for XX individuals, even though they would carry the gene, instead of hoping for one of their XY children to be transgender.

I think it would help if I knew who the individuals in the family tree were. I’m confused because the “bipolar grandmother” is stated as XX with one “weird” X, rather than “weird X” and question mark.

I shouldn’t try to explain things at bedtime. What I meant was that I was confused by Vine’s statement because everyone’s sex chromosomes are given, and the only intersex person on the family tree as it appears is Hyacinth – at least, according to how I’m reading it (top being Hyacinth and her brother). Thus, if Hyacinth is correct about her grandmothers, they *can* only have daughters.

Where’s Erin when you need her?

The key phrase here is “if Hyacinth is correct about her grandmothers”! In the next panel, Hazel wonders if maybe she’s wrong.