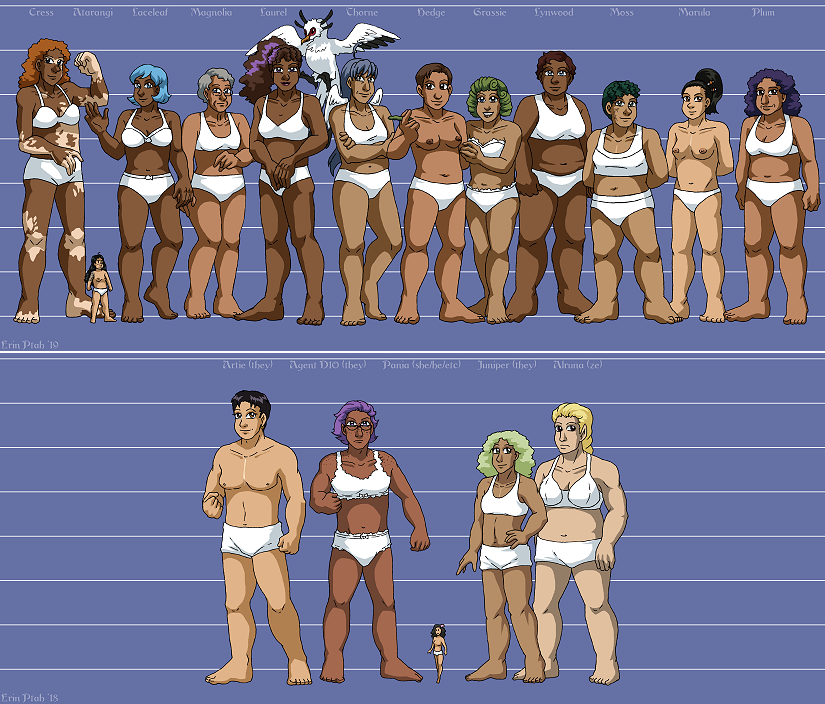 Top: The number of women in the cast has officially outpaced the men, by a whole height chart’s worth.

A few were introduced early on, but didn’t have enough appearances to qualify until now. A few others haven’t actually debuted yet — you’re getting the first look.

Bottom: Finally, a spread for the nonbinary characters!

Still not a big group…but given that Juniper’s been around since the start of the comic and still hadn’t appeared in one of these yet, I figured it was time to go ahead and post it. Probably gonna just update it with new characters as they arrive.

(As usual, this is just a reference for heights and builds. Things like scars/markings might be different in-strip.)

Artie – Broad-shouldered knight of the realm. Took a gender-neutral version of the name of a past (female, famous) reincarnation. Agender, they’re on estrogen.
Agent D10 – Freckly secret agent of United Islander descent. Genderqueer, they’re not on hormones.
Pania – Itty-bitty archmage of Tamapoa. No significant role yet, but so quick to draw that I couldn’t resist. Genderfluid, any pronouns, no hormones.
Juniper – Petite knight of the realm, proud of their shapely arms. Agender, they’re on testosterone.
Alruna – Large grumpy embassy guard. Different ethnicity from the rest, not that outsiders can tell. Nonbinary, ze’s not on hormones.

Is the formatting on this page broken for anyone else?

Nope, not just you! Fixed now.

I am confused: why did some of the characters who use female pronouns go topless? If anyone, I would have expected Lady Stanzia to do so, ’cause vampire/seductress.

It’s about their personal comfort, not them trying to seduce anyone else!