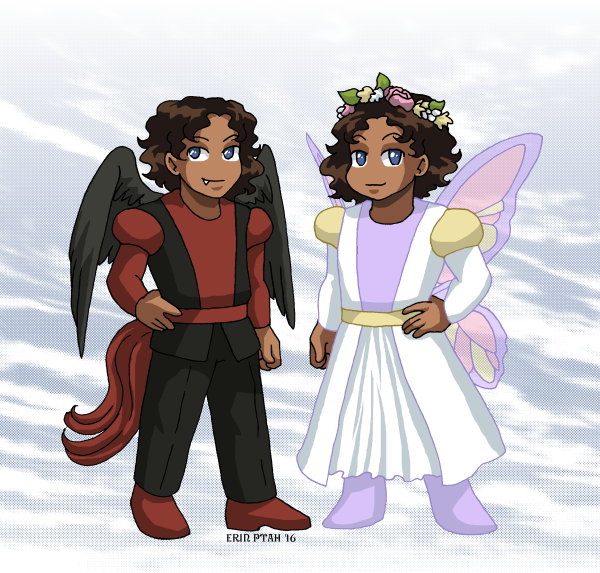 Local mythology. If you’re in Ceannis, and a couple of figures pop up on your shoulders to start giving moral advice, here’s what they’ll look like.

Imps are traditionally depicted with horse-tails and feathered dragon-wings — very large, to distinguish them from the wings that some normal humans have. No horns, because those are associated with dogs, and loyalty and friendliness and all that good stuff. Wear a lot of blood-red and shadow-black.

Faeries wear crowns of flowers, for the same reason brides and grooms do. Butterfly wings, not feathered ones, to distinguish them from imps (and dragons). They wear a lot of white and pastels.

You call THIS very large wings? If he would be human sized, he wouldn’t be able to fly without magic. (Of course, with the “moral advice from shoulders” he’s probably barbie-sized or smaller. And noncorporeal.)

They’re large in comparison with the other human wings in-universe, like Sigrún’s or Pine’s.

“The wings that some normal humans have”.

And does each have a particular shoulder they appear on (as with the classic angel ‘n’ devil pairing), or are they allowed to pick whichever sides seem most appropriate, or even switch sides from moment to moment… so that, for instance, the one that speaks first is always positioned to the left of the frame…? >;=)>

Faerie: Well, consideration is a virtue!

Imp: And easy solutions are something we tend to promote! 😉

In keeping with the principles of Making Comics Intuitive To Read, I’d always put the one that speaks first on stage left.