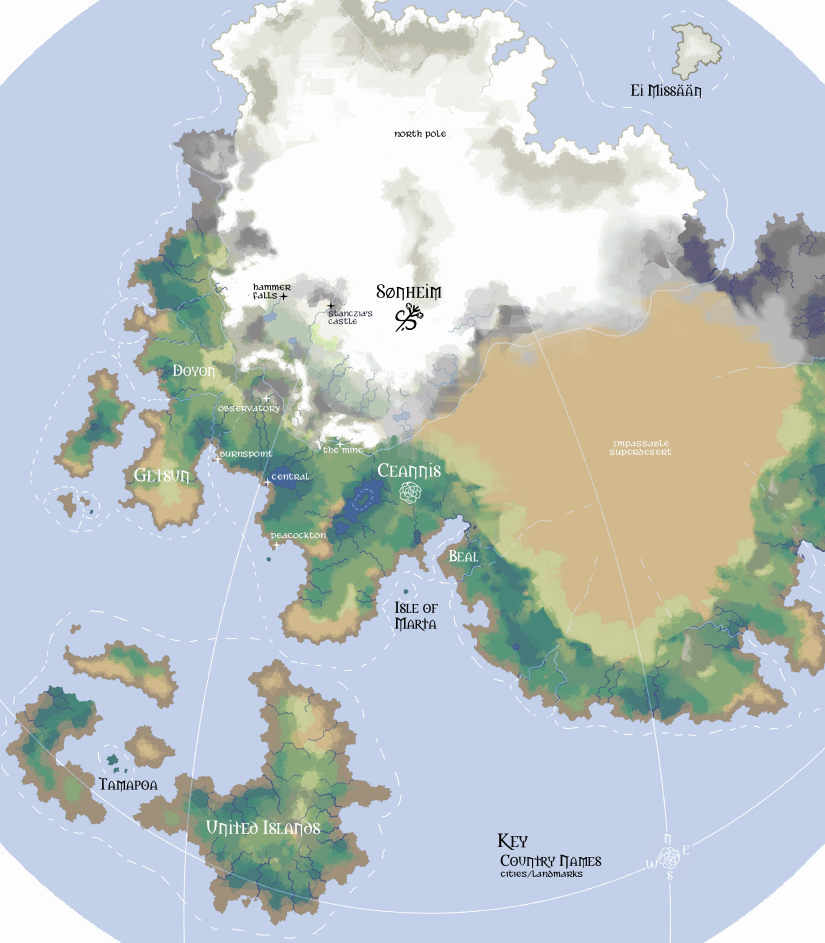 That’s right, I finally made a map for the Leif & Thorn planet where North is up! (Mostly.)

Expanded to show most of the landmass, including all the countries whose names I’ve decided on. Plus several plot-relevant sites and towns that have been mentioned along the way.

For use on Crystalpedia…and maybe, one day, some print volumes?

Part of me is expecting a story to happen there at some point, but also, I don’t know what would happen out there/prompt such a thing.

Is there life on Ei Missään?

At a guess? It’s either occupied, or hazardous. You don’t name places that no one lives unless you need to warn people not to go there.

What about Antarctica? Aside from researchers and penguins, no one lives there, and it’s the type of place you don’t want to go on a casual visit, but we named the heck out of it.

Antarctica is VERY hazardous with it’s temperature alone. However, I would still challenge the sentence: We don’t need to warn people not to go to Sirius or Pipirima and as far as we know noone lives there.

The name seems to indicate yes, though there’s no telling when contact was last Finnished.

What you did there. I see it.

((The Translation of ei missään from Finnish to English is “Nowhere” ))

Deserts are defined by low humidity, not high temperatures. Gobi, while not that much north but around 1km above sea, occasionally have frost and snow on its dunes, and has average temperature below freezing point.

Anyone have any idea what’s up with that island in the middle of a lake surrounded by white segments in the heart of Ceannis’ penninsula? It makes me… concerned. Ancient Sealed Evil concerned.

I think the white segments are supposed to be normal state borders.

It probably has a lake on it is all I’ve got
http://leifandthorn.com/comic/map-of-ceannis/#comment-818

And suddenly it all clicks. Sønheim is geographically screwed. Gigantic country (probably mostly because nobody else wants their land) with no dependable ports. They either need to be skilled diplomats, or they have border disputes periodically as they try to rectify their lack of port situation. Probably they have the best relationship with Ceannis because it’s a big enough country they don’t try to muscle their way to a port ever (too far to get to the ports and too much trouble to do so.) They’re also in ideal territory for vampires, so long as it’s safe for those vampires to sleep for most of the summer.