WiB: Hey! While we’re waiting, I have a critically important question! How did you hold up a different number of fingers from one loop to the next?

Future Thorn: Did you wear the same clothes?

WiB: Same coat. Different outfits under it. Past-you might have had enough memory-resistance to tell.

Future Thorn: Maybe I was basing it on the colors. Like how three is green.

Future Thorn: Hey — Past Leif is coming to see Past Me at the gate.

WiB: Okay, but if the world doesn’t end, we are coming back to this “three is green” thing.

Is this one of those ‘I just assumed everyone thought like me!’ things and Thorn has gone his entire life without realizing not everyone has synethesia?

I’m also on the synesthesia boat, gimme an oar.

Do you guys want me on sails or beating rhythm for the oars?
(I’m assuming this vessel is something like a Viking ship that has both.)

I’ve always wondered where the line is between actual synesthesia and some things just feeling like a colour fits them. like, three really *should* be green, they just… go together well in my head. and when I didn’t know what sourdough was as a kid, I called it “too yellow” because I’m still not aware of real words for whatever I was tasting there (sour doesn’t seem right, I *like* sour things but not that flavour of bread)

I’m impressed Thorn could tell what color shirt. Its just a shirt. it covers everything. Its just shirt colored?
As far as 3 is green its probably some boring answer like ‘my third period class had a green note book’ cause its not
red
orange
yellow – 3
green
blue
purple

symbol-sensitive synesthesia is surprisingly common, and rarely has any logic or order to the connections made.

Also, I think this is the same loop as tuesday our time. Where she ran and yelled ‘DAD!’ but in that page her shirt is red. Before the yelling at acai flash back.
Thanks Evelyn!

…Oof, that’s just a poorly-timed continuity error! If I haven’t fixed it by tomorrow, somebody come back and remind me…

The red shirt also appears to be a turtleneck shirt.

I remember there was another page that hinted that Thorn has synesthesia, but it must have been years ago, and I don’t have the time to look for it.

Four is green, not three. (Seven is also green.)

Three is actually yellow, but “three is green” sounds snappier, which is better for comedy!

…also, I decided to correlate Thorn’s color-number synesthesia with the flowers on the Leif & Thorn print volumes. One is pink, two is purple, three is green, four is orange, five is blue! Six is TBD.

three is green. seven is, like, yellow or orange. I don’t have a colour for four, though. eight is purple.

Oh wow. I didn’t even think I had color-number synesthesia, but you’re absolutely right about seven being green. It’s so green I don’t know how I didn’t notice before.

three is green because all landing gear is touching the ground 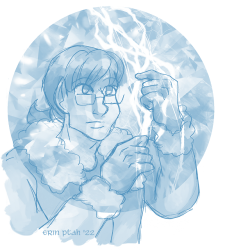