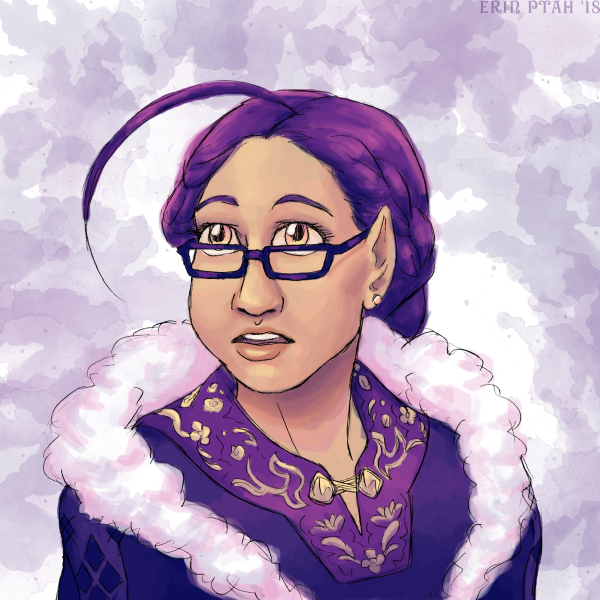 Just updated the Leif & Thorn site style, and removed a bunch of code I don’t think was being used for anything. But if you spot some part of the layout that’s suddenly broken or harder-to-use, comment and let me know! (Do mention what browser you’re using, to make it easier to troubleshoot.)

Formal-wear portrait of one of the Embassy’s resident kids.

Iona Nibelungsen: tween twin daughter of the Culture Minister, picking up the Ceannic language a little better than her sister. Gets around on a floating chair (her legs move, they’re just too small to walk on). Oddly immune to the memory-clouding abilities of…uh…what’s-her-face.

Layout looks fine to me, but is disabled because of a mixed-content warning! I think you need https:// instead of http:// somewhere

disabled *by default*, rather

I can’t figure out where, because everything I can find is set to http://, no extra security enabled! Did your warning give any more-specific information? (And what browser did you get it in?)

It only happens if you visit https://leifandthorn.com explicitly, which isn’t set to happen by default. (It probably should be though; for example I was browsing Leif and Thorn on a bus a while ago and the free wifi was stuffing popup ads into your website.) If for some reason you don’t want to turn the HTTPS redirect on for everyone, you can also do href=”//leifandthorn.com/…” (not specifying either http: or https:) and the browser will pick the correct one for you.

I’ve also noticed that all the links go white and vanish whenever I hover over them or tab onto them. It looks like your theme expects a dark background and that color change got missed.

I’ll look into switching the configuration! And thanks for the linking tip, that could be useful.

A version of the stylesheet without the white a:hover has been uploaded (so if you’re still seeing a cached version, just wait a bit). Must’ve accidentally copied the style from the top-menu links to all the links.

> It only happens if you visit https://leifandthorn.com explicitly, which isn’t set to happen by default.

Ah, that explains it. I have an addon that automatically redirects to the HTTPS version of any website if there is one. Usually it doesn’t break anything because if someone’s website supports HTTPS, they tend to make it the default anyway. (In fact I didn’t realise L&T wasn’t HTTPS-by-default already, because previously it worked just fine.)

Seems like Erin figured it out though. The new theme looks great!