Your annual reminder that you can support Leif & Thorn on Patreon, and you’ll get monthly high-res wallpapers in appreciation.

Jump in at the $5 level to unlock the whole multi-year archive, including these:

April: Knights in a Bottle

Lil’ glass-bottled versions of Juniper, Birch, Violet, Rowan, and Pascentia, from Leif & Thorn. Mostly with flowers/berries/leaves from the plant they’re named after. Didn’t really work for Pas, so I gave her amethysts and dove feathers.

Follow-up, featuring tiny bottled versions of Dexie, Hermosa, Delphinium, the Woman in Black, and…Kale. (Don’t worry, he’s on the opposite side of the table from Dex.)

Again, with flowers/berries/leaves from their namesake plants. I used kale instead of kudzu for Kale’s bottle…seems like he’s not sure what to make of it.

Dex’s bottle includes some amethysts, to match with Pascentia, and the wing of a common nawab butterfly — previously categorized as Eriboea athamas dexippus.

Skin Horse did a “character faces as cookies” bonus wallpaper, and I liked the idea so much I made one for Leif & Thorn. Starring Leif, Thorn, Tiernan, and the Woman in Black — plus Leif’s bracelet, Thorn’s sword, and a rose.

If this doesn’t seem August-y enough, imagine they’re those novelty ice creams in the shape of character heads.

Hey, Erin, since it’s winter holiday season, do you want to put together the poll results from the life-sword questions?

If not, that’s understandable, have a wonderful winter holiday! 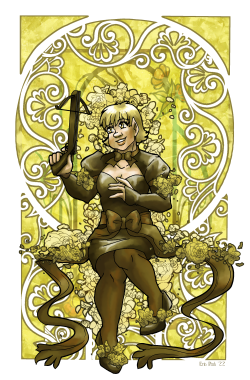