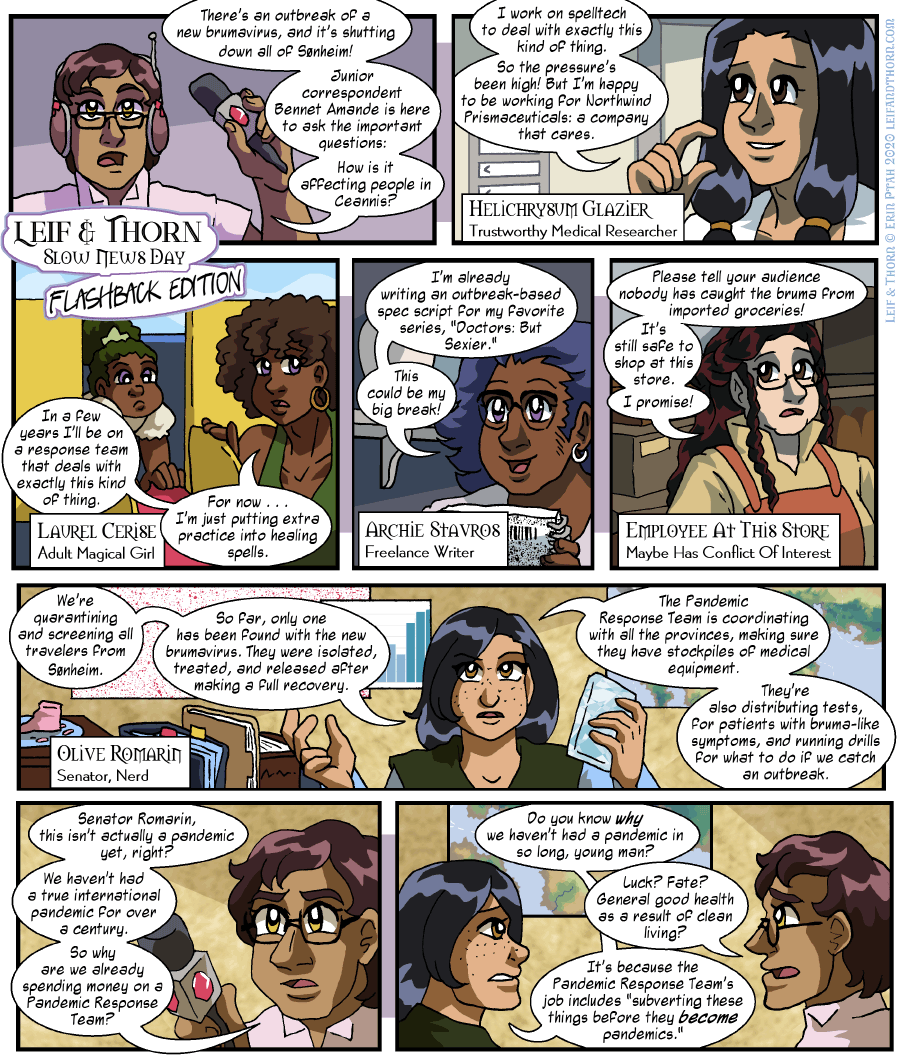 Didn’t want Sønheim to get all the flashback action, so here’s what’s going on in Ceannis during the quarantine storylines!

…most of these characters are old enough in the present-day strip that they’re just going from “adult” to “slightly younger adult.” At least they still have plenty of opportunities for ironic foreshadowing.

The employee in the Sønska import grocery is a cameo from Clara Danao, another backer of the Volume 3 Kickstarter. Her present-day self was seen during “Something’s Cooking” as a store employee, as a cameo for backing a previous Kickstarter.

Bennet: There’s an outbreak of a new brumavirus, and it’s shutting down all of Sønheim! Junior correspondent Bennet Amande is here to ask the important questions: How is it affecting people in Ceannis?

Helichrysum Glazier (Trustworthy Medical Researcher): I work on spelltech to deal with exactly this kind of thing. So the pressure’s been high! But I’m happy to be working for Northwind Prismaceuticals: a company that cares.

Laurel Cerise (Adult Magical Girl): In a few years I’ll be on a response team that deals with exactly this kind of thing. For now . . . I’m just putting extra practice into healing spells.

Archie Stavros (Freelance Writer): I’m already writing an outbreak-based spec script for my favorite series, “Doctors: But Sexier.” This could be my big break!

Employee At This Store (Maybe Has Conflict Of Interest): Please tell your audience nobody has caught the bruma from imported groceries! It’s still safe to shop at this store. I promise!

Olive Romarin (Senator, Nerd): We’re quarantining and screening all travelers from Sønheim. So far, only one has been found with the new brumavirus. They were isolated, treated, and released after making a full recovery.

The Pandemic Response Team is coordinating with all the provinces, making sure they have stockpiles of medical equipment. They’re also distributing tests, for patients with bruma-like symptoms, and running drills for what to do if we catch an outbreak.

Bennet: Senator Romarin, this isn’t actually a pandemic yet, right? We haven’t had a true international pandemic for over a century. So why are we already spending money on a Pandemic Response Team?

Romarin: Do you know why we haven’t had a pandemic in so long, young man?

Romarin: It’s because the Pandemic Response Team’s job includes “subverting these things before they become pandemics.”

The fifth panel: WOW, Bennet – really? (Unless someone else is in charge of the graphic.)

It says junior correspondent, that implies he has very minimal control over those.

I wonder if that’s Northwind’s motto, “a company that cares”, or how much Helichrysm’s been brainwashed.

Hm, in hindsight we know how Northwind Prismaceuticals handled other issues, but I don’t think that this phrase (on its own) is a sign of brainwashing. I guess a lot of companies (including the one where I work at) assured their employees and customers that they care for them and take precautions for their safety. At least that’s what I perceive in many commercials.
Dr. Gaillard (isn’t this supposed to be Glazier, by the way?) might be interviewed as an Northwind representative rather than just for her personal opinion.

Whoops, I was bound to make that mistake with the name at some point. Fixed, thanks.

While it’s standard practice for companies in the US to be quick to say they care about their employees and customers, I personally feel like it’s endemic attempts at brainwashing. I mean, a lot of people do recognize that they don’t really mean it, but it feels like most people just think it’s their own employer who doesn’t really mean it.

To be clear, I’ve certainly worked at places where the people cared about their customers’ and employees’ health. But generally, that’s been the office or maybe just part of an office, not the company. For example, on my first IT contract, there was one supervisor who cared about the employees. She was my supervisor at the end of that contract, and that made a huge difference for me. The manager clearly didn’t, and seemed to be under the impression that didn’t interfere at all with him being everyone’s friend.

I can say for a fact that this is par for the course in the service. We’re bombarded with reminded that our physical and mental health is vital and that we shouldn’t ignore it, but I’ve seen plenty of cases where bad leadership can and will ignore potential problems because admitting it results in minor adverse notices for their sections. The irony is, it’s an absolute crock of shit and fails on every level to brainwash anyone.

Best example is that one time, I had a junior come up and ask if he could go to medical for a heart problem. I said of course, and asked why he hadn’t let anyone know earlier. He said that he didn’t want to when we had our old leadership because he knew they’d bitch at him and call him weak. This is in spite of the fact that we’re told that as NCOs, we have to look out for the well-being of our Marines and that their physical and mental health is as much our concern as the individual Marine. We all know the DoD says this shit, but we also know that it isn’t carried out on a small-unit level more than half the time.

Doctors, But Sexier is a refreshingly honest title for a TV drama

Pity it didn’t got as far as Magical Crime Law Investigation Squad.

I have, unfortunately, spent enough time in the emergency department to know that “Doctors, But Sexier” isn’t a particularly high bar.

I mean, sure, there are some pretty attractive doctors out there. At least, while they’re not yet on the clock for the day, and at the start of their shifts.

At the end of a 12 hour workday? Not nearly as many.

… Why do so many doctors work 12+ hour work days? I mean, aren’t they the ones telling us how unhealthy working over 8 hours is? Are they just trying to demonstrate how unhealthy it is so we can see? Or is something else going on?

My understanding is that patients get a lot of benefit from having the same doctor attending to them over a long course of time, instead of being handed off from doctor to doctor. Less risk of trying the same treatment twice; more chance of noticing patterns and slow-developing trends in their status. That kind of thing.

At least, that’s the theory…no idea how much the real-world research supports it. I spend a lot more time watching Doctors, But Sexier type TV shows than looking up peer-reviewed papers on hospital management.

Also, staff aren’t necessarily kept on their feet for the whole 12 hours in a row. They have break rooms with beds, which Doctors But Sexier mostly use for illicit workplace hookups, but real medical personnel just get to nap in.

A week before the lockdowns hit my state, my friends and I went to have dinner at the local Super H Mart (a Korean grocery store) and my mom was unnecessarily worried we’d get COVID going there. I called her out on being racist XC

An ounce of prevention is better than a pound of cure

Paraphrasing a literal argument I’ve had with some of my relatives about the concept: But the prevention is against my moral beliefs!

Me: Well then you don’t have to use it.

So the answer to “How is Ceannis dealing with the pandemic” is … by being so well ready it didn’t actually hit them. Good idea. Noone on our Earth was this well ready.

When an illness is contagious for a week before symptoms show, and 80% of the time they don’t even show then, being prepared for that is pretty damned hard.

That having been said, that’s real world. Cue magitech. With magitech, once you know how to detect an illness, you just can. You don’t need to worry about supplies of reagents which for the past few decades had only really been used in classrooms and research labs because it’s cheaper to just prescribe broad-range antivirals or antibiotics and hope for the best, rather than figuring out exactly which bug is infecting a particular person.

Suddenly, that whole “invisible carrier” issue is no longer a problem.

It’s not a problem with this particular fantasy world. It’s part of the reason why magic and magical thinking is so attractive to so many people.

COVID is unusually nasty in terms of being contagious before it’s noticeable…but the real world still could’ve been more prepared in non-magical ways.

When figuring out what measures Senator Romarin would talk about here, I used “the Obama administration’s actual response to an ebola outbreak” as a touchstone.

It’s also supposed to have a competent response on the Sønheim side — both from the government, and from a population that takes the threat seriously. So my biggest reference there is the hosts of This Week In Virology, and every time they’ve said “this would’ve been much easier to control if the US had already been doing X and funding Y, and if all the people would follow the medical advice to do Z.”