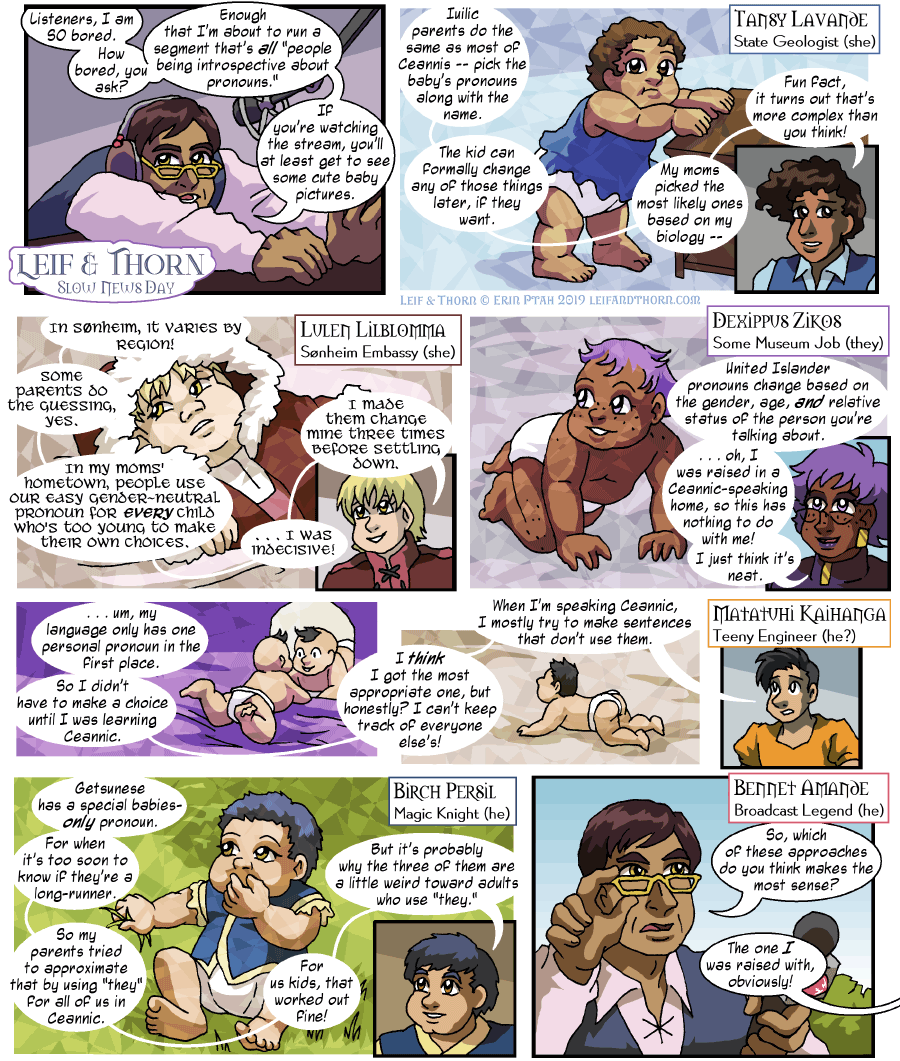 Bennet: Listeners, I am SO bored.

How bored, you ask? Enough that I’m about to run a segment that’s all “people being introspective about pronouns.” If you’re watching the stream, you’ll at least get to see some cute baby pictures.

Iuilic parents do the same as most of Ceannis — pick the baby’s pronouns along with the name. The kid can formally change any of those things later, if they want.

My moms picked the most likely ones based on my biology — Fun fact, it turns out that’s more complex than you think!

In Sønheim, it varies by region! Some parents do the guessing, yes. In my moms’ hometown, people use our easy gender-neutral pronoun for every child who’s too young to make their own choices.

. . . I was indecisive! I made them change mine three times before settling down.

Dexippus Zikos
Some Museum Job (they)

United Islander pronouns change based on the gender, age, and relative status of the person you’re talking about.

. . . oh, I was raised in a Ceannic-speaking home, so this has nothing to do with me! I just think it’s neat.

. . . um, my language only has one personal pronoun in the first place. So I didn’t have to make a choice until I was learning Ceannic.

I think I got the most appropriate one, but honestly? I can’t keep track of everyone else’s! When I’m speaking Ceannic, I mostly try to make sentences that don’t use them.

Getsunese has a special babies-only pronoun. For when it’s too soon to know if they’re a long-runner. So my parents tried to approximate that by using “they” for all of us in Ceannic.

For us kids, that worked out fine! But it’s probably why the three of them are a little weird toward adults who use “they.”

So, which of these approaches do you think makes the most sense?

Literally anyone: The one I was raised with, obviously!

Obviously the tamputian approach makes the most sense.

Why does part of your private life have to me on linguistic display?!

yes, but written Chinese requires you to keep track, and having all the 3rd-person pronouns, including the inanimate ones, pronounced the same but written slightly differently, added to my frustration while learning Mandarin.

In my language it’s not just pronouns, which makes saying gender-neutral sentence close to impossible. Although you can get around that with sentences where for example the subject is “person” making the correct gender for sentence “she” because person is “she” in my language (also, dog is “he”, cat is “she”, car is “it” but truck is “he” …)

… so, to conclude, I’m totally saying that the approach I was raised with is NOT the one making most sense.

What language is that? It reminds me of Spanish.

oh neat!! i’ve got a queer high fantasy story on the backburner, and i’m super picky about my fantasy conlanging, so figuring out what to do about baby pronouns has been tricky. i’ve definitely considered a few of these options.

The system I was raised with uses the pronoun ‘he’ for any potentially person entity who isn’t know to be a ‘she’. This is totally not the one that makes the most sense. In order for it to be a candidate, it needs to make sense at all first.

The worst thing about it was it was explained that one does this to avoid offending the new person. That felt so insanely offensive I couldn’t even come up with a proper response to it.

I like the Tamputians’ approach. This would be simple enough even my flatmate’s advisor could probably figure it out, without needing to contort their brain into all manner of uncomfortable positions.

Although, that said, I note that Matatuhi clarified they weren’t talking pronouns, but personal pronouns. I want to assert, for the record, that I’m not necessarily signing off on whatever strange contortions they do with impersonal pronouns, until such point as I know what they are, so I can review them and make a decision.

To be clear about this, I’m not saying they’re necessarily bad. Just saying that if their impersonal pronouns do something bizarre, like having six different sets of impersonal pronouns, which must be matched up correctly to the impersonal nouns for correct communication, along with six different sets of articles to be used with these same nouns, in order to convey the same meaning, and if you use the wrong article, you totally change the meaning of the word. Like, for example, if das hund is a dog, but die hund is a cat… that’s just a problem on so many levels.

Alternatively, if they just have one impersonal pronoun, but it just happens to be the same name as the colloquial word for feces, that would also be a problem. (Note that of course I’m saying that primarily because I deal with that “shit” all the time.)

I love all the different pronoun possibilities across cultures. As a fellow worldbuilder, this is the diversity I inspire to have with my conlangs as well. (Which also mirrors how pronouns are handled in various real-life languages. My respect goes to the Finno-Ugric languages who never installed a system of gendered third-person pronouns in the first place.)