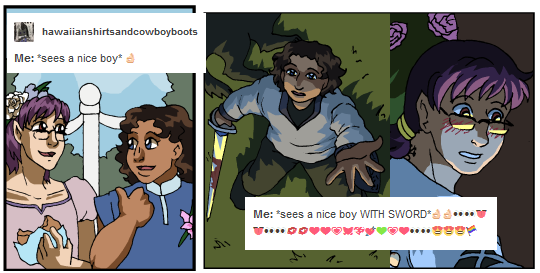 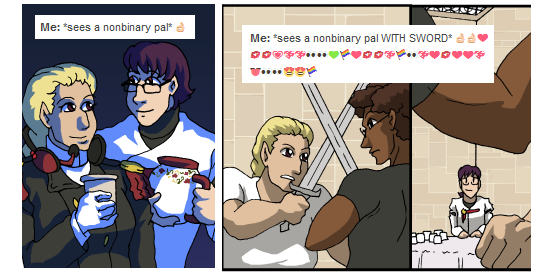 Okay, when did this trend start? I’m noticing lately that everyone seems to be to a thing for characters with swords.

Probably with Conan the Barbarian, if not earlier.

Well, the dawn of Swashbuckling as a genre goes back a few hundred years, so… somewhere around then, maybe?

According to wikipedia, about 1700 BC.

What other reason you think was for development of swords?

Well it might just be because I’m reading this comic, but I feel like there’s a trend of the LGBT community on the net having a thing for swords.

You can maybe trace some of that to the popularity of Xena Warrior Princess.

I’ve consulted everyone in the system who’s up here pestering me, and we’ve got: (sexuality in parenthesis for reference in case that’s important somehow)
Aislinn (bi) – Married to a guy with a sword (and of the opinion that he’s even hotter in his full getup and brandishing a sword than he is in the nude, which is saying something because this woman loves nudity more than life itself). As for her thoughts on women, she also thinks that they’re hotter with swords, but she doesn’t have /as/ strong of a preference.
Valeria (gay) – Uncertain, but probably yes to sword lady.
Eván (straight) – Definitely goes for a bad*** lady with a sword.
Echo (ace) – I don’t think I count /as/ much, but I’d definitely find it cool if someone had a sword.

So I’m thinking that there’s just some sort of natural inclination towards sword people.

I feel the need to point out that Aislinn is a scriptive and the 16-year-old body has nothing to do with the marriage business. Or the son business. Or any of the adult business.

Though I sometimes wish that Rowan (son) were a part of the external world because I would really like to play with the sweet waddle bean child.

Interesting. I ask because, at least to me, (And apologies if I don’t manage to put this well) a sword adding to someone’s attractiveness feels like it should’ve been jettisoned with the advent of personal multi-shot firearms. So I was curious if there wasn’t some kind of cultural thing that’s keeping it alive.

Hm, well, for Aislinn firearms are a fairly new concept, given that the work of fiction she comes from doesn’t really make much use of firearms. So I’ll take her out of this, since she’s pre- personal multi-shot firearms, technically. Though that still leaves three out of four.

I think that swords might be something that the rest of us are attached to because
1) They’re still a good weapon, they’re just… not the right weapon of choice anymore, since you’d probably get shot before you could stab your opponent.
2) It’s associated with the romanticized aspects of the past (y’know, knights and chivalry and quests and whatnot), so it holds positive cultural connotations.
3) Works of fiction often present the love interest(s) as sword-bearing, where applicable. I know that not everyone is a bookworm, but that might influence it for some.

Of course, I’m just guessing. I don’t understand the psychology behind “swords are hot”

Hm, I guess one could also say that if a person can wield a sword they’ve got to have muscle, and muscle is also considered attractive. Maybe that connection is also being made.

There may be something on the fact that swords are rare and only people who mean it have them, while everyone may have gun.

However, I would submit two points for the “compare the sexiness of sword versus gun”: first would be Bond, James Bond ; second would be Arnold Schwarzenegger in his OTHER movies than Conan.

If the attractiveness was all based on “look how quickly this person can kill a bunch of other people,” then sure, it would’ve shifted from swords to guns. But that’s…not really the central factor, here.

Frankly, I think the fact that swords are a step removed from modern realities of violence is part of the draw. You don’t get large groups of people reacting with “ugh, this romanticization of swords is uncomfortable and off-putting because I’ve actually been threatened with a sword, and/or lost a friend/relative/loved one to an act of sword violence.”

A couple other factors:

– It’s a meme (look up “while you were busy being heterosexual, I studied the blade”)
– There are a bunch of series with LGBTQ themes and iconic sword-wielding LGBTQ characters — off the top of my head, Princess Knight, Utena, She-Ra (new version), Xena, Sailor Moon
– Swords hearken back to an era when militaries tended to be all-male, so they’re either associated with “a bunch of men voluntarily committing to spend time alone together” (same reason there are jokes/memes about how gay the Navy is), or “a woman deliberately taking on a masculine role” (pretty directly appealing to queer women & trans men, more generally appealing to anyone who wants to see gender roles defied/subverted/reimagined, which is, uh, most LGBTQ people)
– They go with overall fashion senses that tend to be LGBTQ-popular, like “women in sharp formal buttoned-up military uniforms with pants,” or “men in fancy old-fashioned outfits with lots of frills and trim and color”
– You’re hanging around in a lot of online communities full of nerds who like fantasy, so no matter what our gender/sex/orientation, we all think swords are cool and swordfighting looks awesome

Ok, I’m familiar with Xena, and both the new and old She-Ras, and I’ve watched Utena and Sailor Moon…

Please tell me more about this Princess Knight?

One of Tezuka’s classic manga series, Ribon no Kishi in Japanese, spent a long time not getting a serious English-language release, but the anime is now available on Crunchyroll:

Our hero(ine) was born biologically female, raised/presented as a boy, and spiritually has “both a Boy Heart and a Girl Heart.” Goes around having cute fantasy adventures, occasionally with cute girls. (I did fanart with one of them.)

There’s some obvious 1960’s Gender Essentialism involved in the premise, but also plenty of content for queer and/or trans kids to latch onto. And it inspired the next generation of works, which got increasingly nuanced and overtly-LGBTQ over the years — you could draw a direct line from Princess Knight through Rose of Versailles through Utena to Steven Universe.

Oh God, PLEASE don’t get me started on the Navy…

Otherwise, thank you for filling in the mental blanks I was having.

Is the Navy your branch’s (sorry I forgot which one you were in. It’s impressive enough that I even remembered you’re in the military, honestly, though, considering my typical memory with facts about people) favorite to pick on? Or do you have personal bad experiences?

If you’re good with answering, of course.

The Marine Corps and the Navy are two coworkers where one gets all the money and the other gets all the work. I’ll let you figure out which is which.

I am sensing a trend here…

Leave a Reply to The Phule Cancel reply