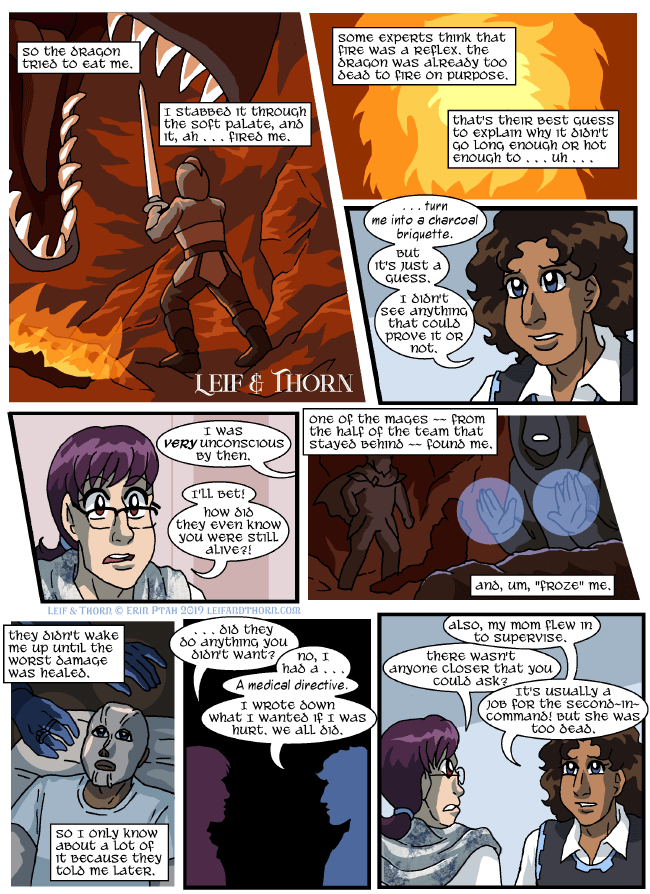 There’s a behind-the-scenes post about making this strip (and the one after it — the panels were drawn out-of-order) for patrons!

Thorn: So the dragon tried to eat me. I stabbed it through the soft palate, and it, ah . . . fired me.

Some experts think that fire was a reflex. The dragon was already too dead to fire on purpose. That’s their best guess to explain why it didn’t go long enough or hot enough to . . . uh . . .

. . . turn me into a charcoal briquette. But it’s just a guess. I didn’t see anything that could prove it or not.

I was very unconscious by then.

Leif: I’ll bet! How did they even know you were still alive?!

Thorn: One of the mages — from the half of the team that stayed behind — found me. And, um, “froze” me.

They didn’t wake me up until the worst damage was healed. So I only know about a lot of it because they told me later.

Also, my mom flew in to supervise.

Leif: There wasn’t anyone closer that you could ask?

Thorn: It’s usually a job for the second-in-command! But she was too dead.

I think I missed something, what medical directive? If you’re wounded they’re gonna do what they have to in order to save your ass, are we talking do not resuscitate orders here?

I think you can mandate a maximum level of medical intervention, e.g. “if I need three or more biological systems(Cardio, respiratory, renal, et cetera) replaced with machines, please say your goodbyes and let me go.”

Speaking from an unfortunate amount of experience, I can say that medical directives can be as simple as Khyrin’s example to a much more thorough version of “In the event of (insert condition here) and I am unable to make sound medical decisions for myself, these are the actions I want taken to preserve/ not preserve my life. And for anything not covered here, this is the person I’m appointing my medical power of attorney.”

I’d like to know the specifics of magical “freezing”, please. (Unless it will be explained soon in-comic.)