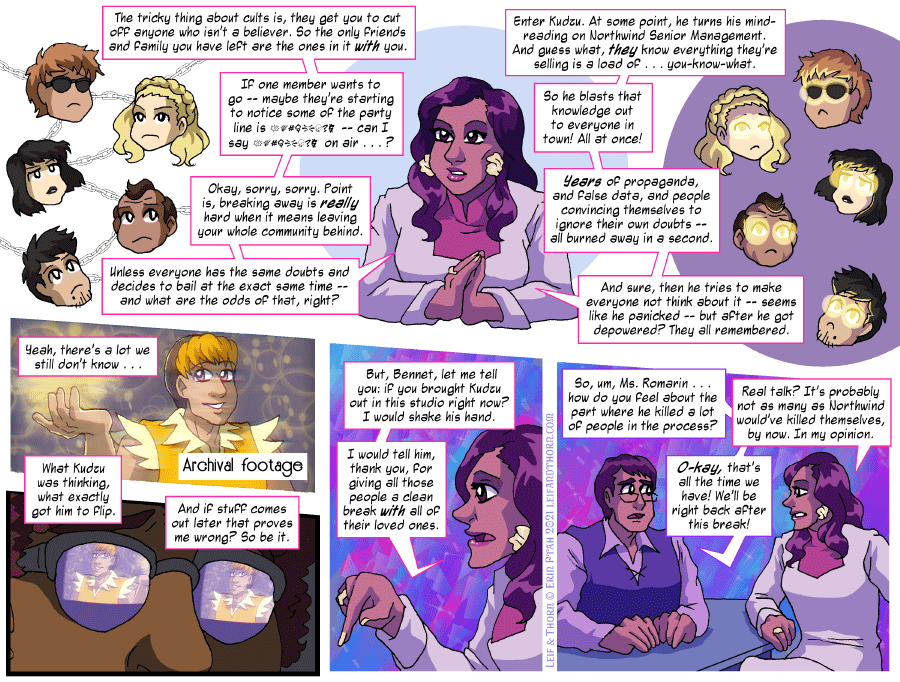 Repeating some of the employees from Slow News Day: After Northwind.

Peony: The tricky thing about cults is, they get you to cut off anyone who isn’t a believer. So the only friends and family you have left are the ones in it with you. If one member wants to go — maybe they’re starting to notice some of the party line is [censored] — can I say [censored] on air . . . ?

Okay, sorry, sorry. Point is, breaking away is really hard when it means leaving your whole community behind. Unless everyone has the same doubts and decides to bail at the exact same time — and what are the odds of that, right?

Enter Kudzu. At some point, he turns his mind-reading on Northwind Senior Management. And guess what, they know everything they’re selling is a load of . . . you-know-what.

So he blasts that knowledge out to everyone in town! All at once! Years of propaganda, and false data, and people convincing themselves to ignore their own doubts — all burned away in a second.

And sure, then he tries to make everyone not think about it — seems like he panicked — but after he got depowered? They all remembered.

Peony: Yeah, there’s a lot we still don’t know . . . What Kudzu was thinking, what exactly got him to flip. And if stuff comes out later that proves me wrong? So be it.

But, Bennett, let me tell you: if you brought Kudzu out in this studio right now? I would shake his hand. I would tell him, thank you, for giving all those people a clean break with all of their loved ones.

Bennet: So, um, Ms. Romarin . . . how do you feel about the part where he killed a lot of people in the process?

Peony: Real talk? It’s probably not as many as Northwind would’ve killed themselves, by now. In my opinion.

Bennet: O-kay, that’s all the time we have! We’ll be right back after this break!

I wonder if Kale’s seen this broadcast.

I wonder if this triggers anything for Hermosa, since, y’know… HE is “what exactly got [Kudzu] to flip”, just like Peony said; Hermosa KNEW Northwind’s party line was [not fit for print], and by reading his mind, Kudzu was enlightened.

I think that’s the idea, yeah. Looking forward to the fireworks.

I mean yeah, but I was more thinking it might do Kale some good to hear that he helped a lot of people in the long run, yknow? Obviously in the moment this is important for Hermosa, but for someone like Kale whose self-esteem isn’t the best, hearing things like this now and again can’t hurt.

I’m liking Peony a lot. Would love to find out why Kale’s alias was given her last name, but I assume we will find out in time?

I think Erin just told us the Doyalist reason… I wouldn’t be surprised if the Watsonian reason is Peony was involved with the clean-up and approached Acai to meddle on Kudzu’s behalf just quick enough to blindside Acai’s futuresight/precognition/et cetera.

I usually don’t get crushes on character but Peony is really cute ;0;

Speaking of cults…hey americans, how good/trustable is “People magazine”?. I caught a string of documentaries about cults, made under that publication’s name, and I would like to know how seriously should I take them.

People magazine is a celebrity mag, but out of the various celebrity tabloids out there it’s probably the most legit. They’re owned by the same company that owns other popular American magazines that are generally well-liked. So I would say their videos aren’t totally tabloid material.

Yeah, I would say on a scale from “Forensic Files” to “Ancient Aliens”, a documentary done by People Magazine is probably somewhere in the middle in terms of accurate information versus sensationalism.

@Inahc So she’s not saying it was good. Just that he did something good as well and that he saved more people than killed … which may easily be true, he probably didn’t directly killed that many people … number of people who needed new eyes, however, might be worse.

Are we reading the same thing? She is saying it’s good, she’s even dismissing all the murdering as something that would’ve happened anyways. Very flippant way to talk about lives ended.

Favorite set of pronouns (for people to refer to you with)? (Non-English responses also welcome. Multi-pronoun responses will be consolidated under "not just one favorite.")