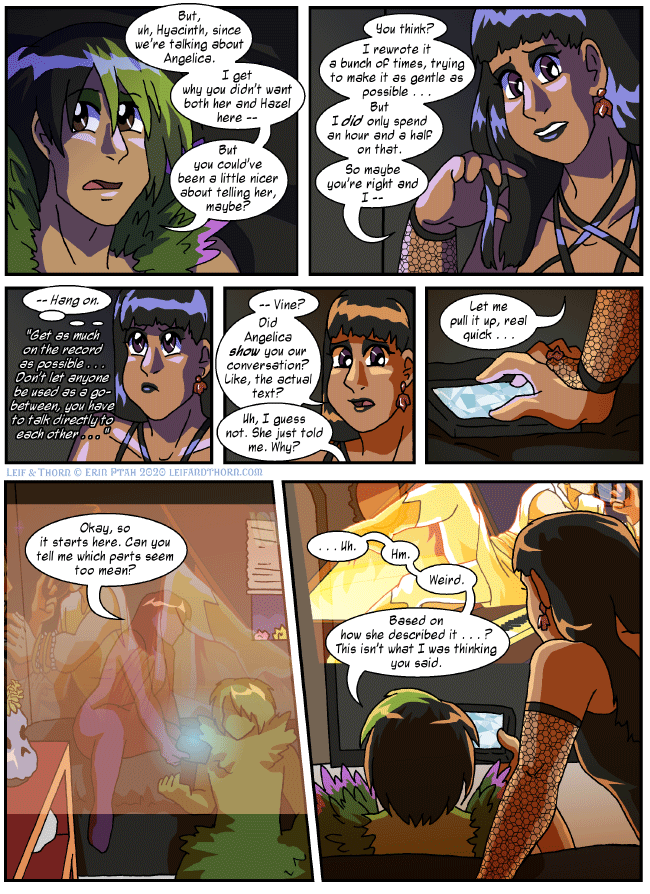 Vine: But, uh, Hyacinth, since we’re talking about Angelica. I get why you didn’t want both her and Hazel here — But you could’ve been a little nicer about telling her, maybe?

Hyacinth: You think? I rewrote it a bunch of times, trying to make it as gentle as possible . . . But I did only spend an hour and a half on that. So maybe you’re right and I —

Hyacinth: — Vine? Did Angelica show you our conversation? Like, the actual text?

Okay, so it starts here. Can you tell me which parts seem too mean?

Now, the question is, was Angelica vagueposting, or twisting words?

Vagueposting is just attention-seeking and may be somewhat forgivable. Her actively LYING to Vine would be more difficult to excuse.

I don’t think “twisting words” is actively lying and I don’t think it really matters if Angelica was giving a false impression about Hyacinth being mean because it was what she believed or if it was because she wanted Vine to believe it.

Whether or not someone is being deliberately or accidentally toxic doesn’t change the fact that they’re toxic. What matters is how they react if the effects of their behavior and attitude are brought to their attention.

Is it just me or are you drawing Vine more masc than you used to? Not sure whether to associate his sharper jawline with T, improved drawing ability, age, or wishful thinking lol

I am! He’s almost a year older than when we first saw him, and he’s been on T that whole time, so it’s a little of both.

It’s cute that your avatar now has a mask.

Is this whole list written down somewhere, or is it just sorta being made up as you go along? Because I feel like it’d be a handy resource to have on hand.

A list is written in Family Deserts 31/33, and Hyacinth’s thoughts are quoting/paraphrasing from there. The fading out at the bottom suggests it could be incomplete, though.