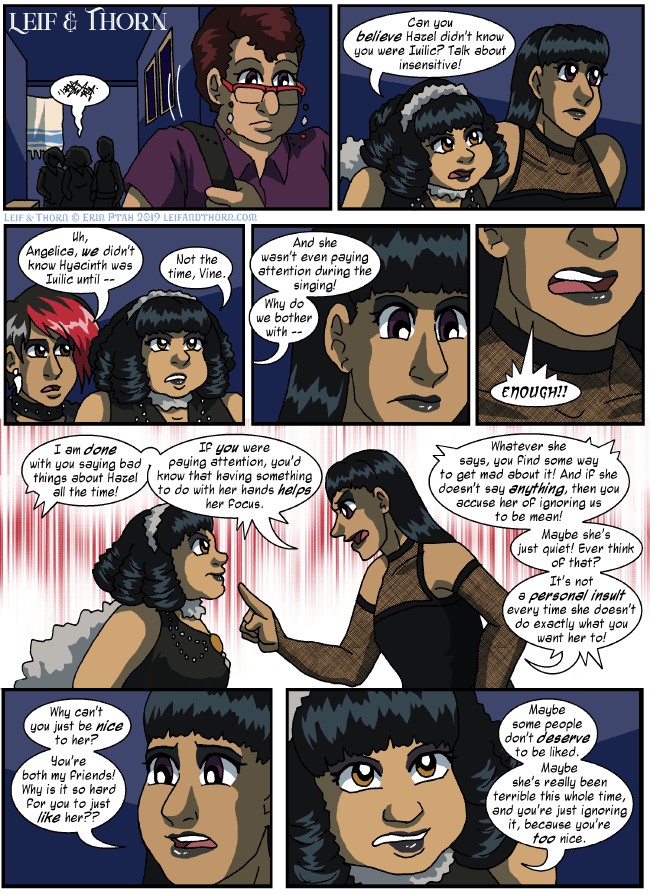 Angelica: Can you believe Hazel didn’t know you were Iuilic? Talk about insensitive!

Vine: Uh, Angelica, we didn’t know Hyacinth was Iuilic until —

Angelica: Not the time, Vine.

And she wasn’t even paying attention during the singing! Why do we bother with —

I am done with you saying bad things about Hazel all the time! If you were paying attention, you’d know that having something to do with her hands helps her focus.

Whatever she says, you find some way to get mad about it! And if she doesn’t say anything, then you accuse her of ignoring us to be mean! Maybe she’s just quiet! Ever think of that? It’s not a personal insult every time she doesn’t do exactly what you want her to!

Why can’t you just be nice to her? You’re both my friends! Why is it so hard for you to just like her??

Angelica: Maybe some people don’t deserve to be liked. Maybe she’s really been terrible this whole time, and you’re just ignoring it, because you’re too nice.

Here Angelica, take this petard and hoist away.

Yeah, this definitely seems about to blow up in Angelica’s face. I’m sure she has some redeeming qualities, but this storyline hasn’t really shown them off…

Angelica has some major issues to work out. She’s trying to drive a wedge between Hazel and Hyacinth for some reason (Jealousy, envy, pissed that someone new is getting Hyacinth’s attention). Whatever the cause, her behavior is inexcusable and this talk is long over due.

Yeah… Ouch. It’s ok to just not like someone (the “why can’t you just like her” is edging into Geek Social Fallacies) but being a jerk about it is, well, jerky :p

Well Angelica, the two of you already wear enough black, so do you want to be the pot or the kettle?

That moment where you stop excusing your friend’s shitty behavior because they’re your friends, and go “dude. what the fuck???” But like, with a lot more yelling.

All seriousness, Angelica is being an extremely shitty person here, and hopefully she learns from this experience. Because if she doesn’t… well, she might find herself suddenly short a friend.

I suspect Angelica will be short two friends.

Vine was VERY quick to point out that Angelica and he didn’t know until Hyacinth told them, either, and Vine’s the one who explained to Hazel what exactly Hazel did to tick off Angelica vis-à-vis eyeshadow back in The Successful School Life of Hyacinth Lavande #6.

Vine was very quick to counter Angelica in The Successful School Life of Hyacinth Lavande #1 too.

So, I’ve been thinking this for months but keep forgetting to ask… Hazel is implied to be autistic, right? I’m finding her very relatable, and I appreciate how sympathetically she’s portrayed. And I love how Hyacinth totally gets her!

i’m beginning to feel like this might be a longer-running vendetta than what we’ve been shown. the very first time we saw hazel was because angelica was disparaging her with seemingly little provocation (it’s not that unreasonable to assume that people who participate in the same subculture might know and/or interact with each other). i think that they knew each other when they were kids and hazel unintentionally did something that hurt or offended angelica, but angelica never actually said anything about it. she’s been nursing a grudge all these years while hazel’s forgotten about it because it never stuck out in her mind as a significant event. of course, that would only make angelica resent her more. or, even if she does remember, she might not have made the connection between “half-remembered friend who suddenly stopped talking to me when i was 7-ish” and “angelica who seems to hate me now for some reason”.