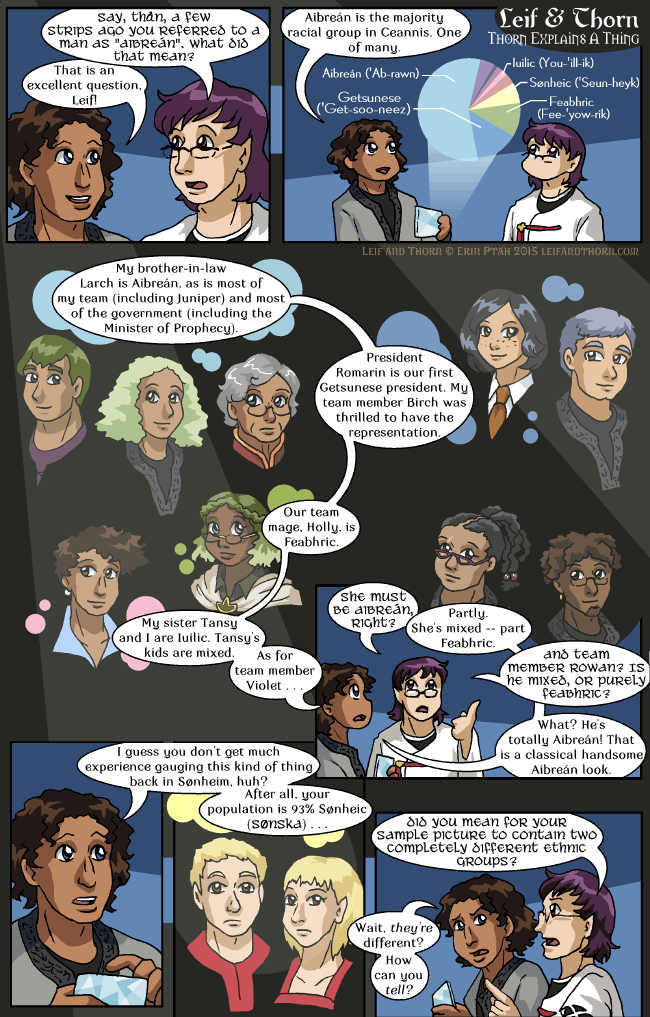 No color-coding in this transcript because the strip takes place in the Magical Exposition AU, where the language barrier isn’t real and the fonts don’t matter.

If there’s anything else about the Leif & Thorn worldbuilding that you want to know, ask in the comments! Thorn is going to need things to explain on future Sundays.

Leif: Say, Thån, a few strips ago you referred to a man as “Aibrean”. What did that mean?

Thorn: That is an excellent question, Leif!

Aibreán is the majority racial group in Ceannis. One of many.

My brother-in-law Larch is Aibreán, as is most of my team (including Juniper) and most of the government (including the Minister of Prophecy).

President Romarin is our first Getsunese president. My team member Birch was thrilled to have the representation.

Our team mage, Holly, is Feabhric.

My sister Tansy and I are Iuilic. Tansy’s kids are mixed.

Leif: She must be Aibrean, right?

Leif: And team member Rowan? Is he mixed, or purely Feabhric?

Thorn: What? He’s totally Aibreán! That is a classical handsome Aibreán look.

I guess you don’t get much experience gauging thiskind of thing back in Sønheim, huh? After all, your population is 93% Sønheic (Sønska) . . .

Leif: Did you mean for your sample picture to contain two completely different ethnic groups?

Thorn: Wait, they’re different? How can you tell?

*laughs*
Thank you for the last two panels. That is literally the reaction when you introduce a Saami in a group of Swedes/Norwegians/Finns.

So what ethnicity/ies is Leif?

Northern. (More on that if/when it becomes relevant in-universe…)

dang it, since Katya also has the purple hair thing going on, I was going to guess that she and Leif were from the same group, maybe one that’s disproportionately represented amongst indentured servants? but I remember now that she’s an unspecified different ethnicity from Leif, and Iona has hair that’s even a shade closer to his, so…who knows!!! it has occurred to me to wonder if the girls had/have a mother and what she looked/looks like

Hmmmm… Rowan is placed with Violet instead of the other Aibreán characters, his skin tone is closer to Violet and Holly than any of the Aibreán characters, and Thorn’s response to Leif’s question about him is suspiciously emphatic… I feel like he’s actually Feabhric, and Thorn’s trying to conceal that fact for some reason? But I don’t know why that would be. There are other Feabhric characters on the team, it doesn’t seem like being Feabhric bars you from any of the things we know he’s doing. Of course, it’s possible that Aibreán people have a wide variety of skin tones and I’m reading too much into this.

The most often hidden ethnicity is “mixed”. Not only some people may try to conceal it deliberately, people may also underestimate how many generations can a genetic trait usually connected to one ethnicity survive mixing with different one.

It’s fascinating that you say “Rowan’s skin tone is closer to Violet’s than to the [other] Aibreán characters,” considering that Violet’s skin is colored with exactly the same palette as most of the Aibreán characters! Including the three at the top of this strip. (I’m guessing you’re reading her as “would be portrayed by an our-world black actor”…and then getting the impression that her skin is darker? Or maybe it’s just an optical illusion caused by the characters’ different hair colors.)

Feabhric people are generally darker, but Aibreán people do indeed come in a wide range of skin tones. So Thorn is identifying people accurately, using things like facial features and hairstyles, while Leif is guessing based on skin tone because he doesn’t have an eye for the other differences.

[…] that date back centuries, e.g. Rhódon (the mythohistorical epic hero), Aibreán (the majority ethnic group), or Iùlag (a constellation, the […]

“What do we all look alike to you?”