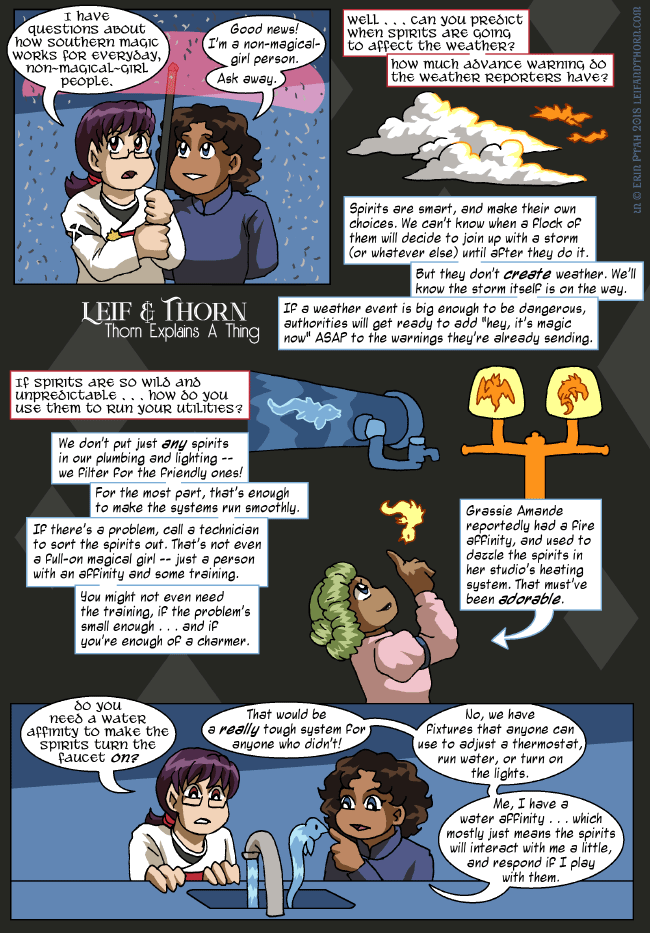 Leif: I have questions about how Southern Magic works for everyday, non-magical-girl people.

Leif: Well . . . can you predict when spirits are going to affect the weather? How much advance warning do the weather reporters have?

Thorn: Spirits are smart, and make their own choices. We can’t know when a flock of them will decide to join up with a storm (or whatever else) until after they do it.

But they don’t create weather. We’ll know the storm itself is on the way. If a weather event is big enough to be dangerous, authorities will get ready to add “hey, it’s magic now” ASAP to the warnings they’re already sending.

Leif: If spirits are so wild and unpredictable . . . how do you use them to run your utilities?

Thorn: We don’t put just any spirits in our plumbing and lighting — we filter for the friendly ones! For the most part, that’s enough to make the systems run smoothly.

If there’s a problem, call a technician to sort the spirits out. That’s not even a full-on magical girl — just a person with an affinity and some training. You might not even need the training, if the problem’s small enough . . . and if you’re enough of a charmer.

Grassie Amande reportedly had a fire affinity, and used to dazzle the spirits in her studio’s heating system. That must’ve been adorable.

Leif: Do you need a water affinity to make the spirits turn the faucet on?

Thorn: That would be a really tough system for anyone who didn’t! No, we have fixtures that anyone can use to adjust a thermostat, run water, or turn on the lights.

Me, I have a water affinity . . . which mostly just means the spirits will interact with me a little, and respond if I play with them.

I’m curious; I’ve only seen water and fire spirits. Is it just the two? The iconic four? Even more than that?

According to the wiki: “The three major types are Fire, Water, and Nature, which are each weak against one of the others in a rock-paper-scissors fashion. Less common domains include Stars, Holly Cerise’s domain” [http://leifandthorn.com/wiki/doku.php?id=magic#southern_magic ; there’s links to pages with images of all the different kinds if you click through, too! <3 ].

According to the tags, nature spirits have only appeared in comic once! [And also on a Saturday Sketchbook, so two pages total.]
They’re my favorite type so I hope they show up more in future :3

So seriously, if Ceannis realized there wasn’t a need for spirits they’d stop using them, right?

“Need” is an interesting word choice there

It’s little like saying there’s no need for electricity or agriculture. Strictly speaking humanity can live without them, but as a species we decided to go with them so long ago… well, it would end very poorly if we stopped the process.

Alright, since apparently I have to clarify. If Ceannis could find a way to keep their infrastructure and magic functioning without spirits, what would stop them from doing it?

Well, the process of replacing entire infrastructure systems would be expensive, difficult, time-consuming, and massively inconvenient for everyone, so the real question is, what would *start* them doing it?

The only other viable option is crystal-based tech, the way the utilities are set up in Sønheim. And there’s no guarantee it would work as well in Ceannis as the current system, let alone better.

As for removing spirits from magic, that’s…not really possible. It would be like trying to make the ecosystem function without insects. But they do already have plenty of individual magic items that don’t use spirits, if that’s what you mean.

Exactly. It’s not that they don’t need spirits anymore, it’s that they’d need a good reason to redo all their infrastructure.

It’s like saying that we “need” electricity in the US. Everything is designed to use it. There are lots of ways to take solar heat into account in architecture, but I’ve noticed that discourse about solar energy these days seems to exclusively focus on generating electricity via solar panels.

Future!Thorne does get to see Grassie and the fire spirits… but good ol regular Thorne can only think wistfully of her

Are the spirits really so smart or are they just intelligent?

Not sure what the difference is, in this context…

It’s not the setup for a “these were sapient creatures being enslaved the whole time” reveal, if that’s what you’re getting at. They’re more on the level of bees kept by beekeepers to produce honey.

You used “smart” on place I would expect “intelligent” to be used. But on second though smart is not more than intelligent, so …

I was not specifically thinking about enslavement but was interested on how intelligent they are. Bees, ok. 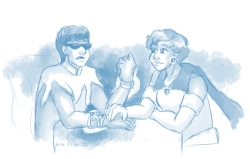