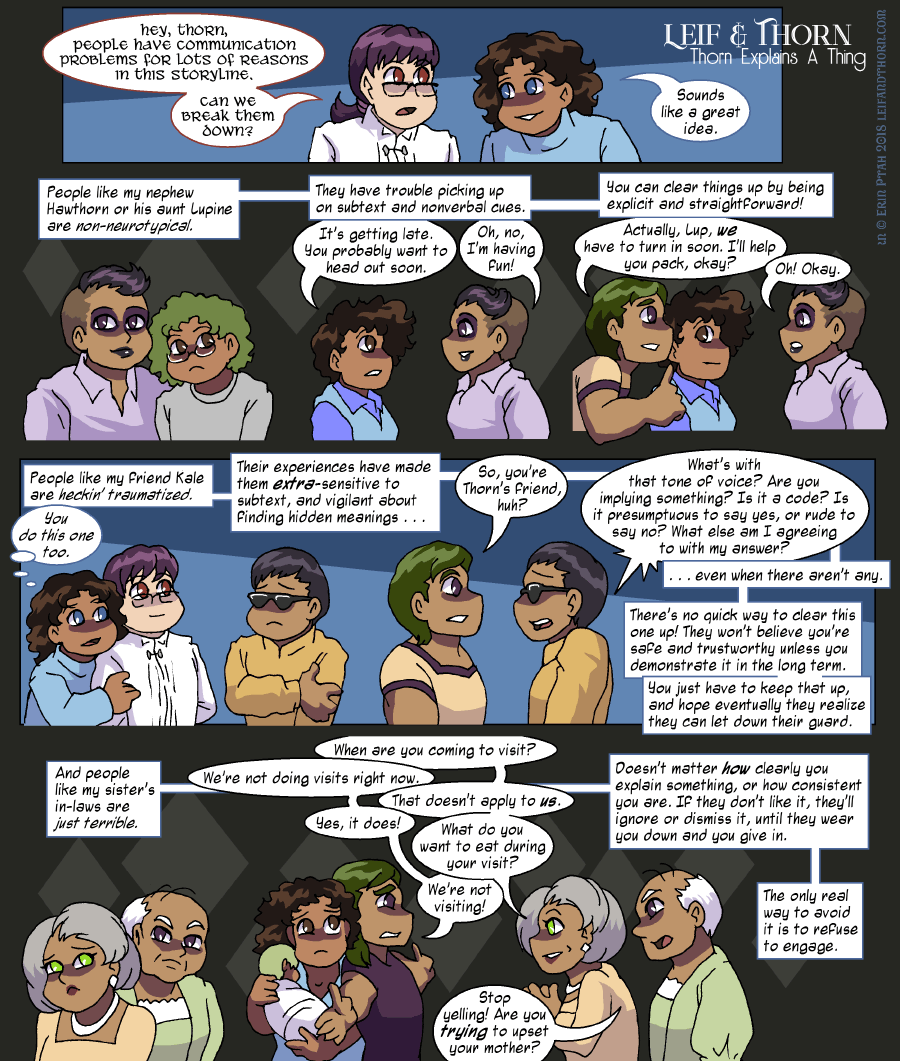 Leif: Hey, Thorn, people have communication problems for lots of reasons in this storyline. Can we break them down?

Thorn (narrating): People like my nephew Hawthorn or his aunt Lupine are non-neurotypical. They have trouble picking up on subtext and nonverbal cues.

Tansy: It’s getting late. You probably want to head out soon.

Thorn (narrating): You can clear things up by being explicit and straightforward!

Larch: Actually, Lup, we have to turn in soon. I’ll help you pack, okay?

Thorn (narrating): People like my friend Kale are heckin’ traumatized.

Thorn (thinking): You do this one too.

Thorn (narrating): Their experiences have made them extra-sensitive to subtext, and vigilant about finding hidden meanings . . .

Kale: What’s with that tone of voice? Are you implying something? Is it a code? Is it presumptuous to say yes, or rude to say no? What else am I agreeing to with my answer?

There’s no quick way to clear this one up! They won’t believe you’re safe and trustworthy unless you demonstrate it in the long term.

You just have to keep that up, and hope eventually they realize they can let down their guard.

And people like my sister’s in-laws are just terrible.

Gloriosa: When are you coming to visit?

Gloriosa: That doesn’t apply to us.

Larch: Yes, it does!

Gloriosa: What do you want to eat during your visit?

Oleander: Stop yelling! Are you trying to upset your mother?

Thorn (narrating): Doesn’t matter how clearly you explain something, or how consistent you are. If they don’t like it, they’ll ignore or dismiss it, until they wear you down and you give in. The only real way to avoid it is to refuse to engage.

Having some work conflict about this. I’m in the autistic category: I don’t pick up on subtexts, but I also leaned into that as my coping mechanisim… I’m happier if I don’t bother CARING about subtexts, as worrying about them just leads to me socially isolating myself. And I found out that this makes me seem like a ‘leader’ to my office because I basically have all of the social bravery of a drunken person now, despite not drinking, and it turns out that drunken social bravery is what american society identifies as leadership potential, so that has been… interesting.

Meanwhile one of my new coworkers (hired in January) is treating me like I’m one of the mean girls in high-school, and analyses everything I say until they find SOMETHING to be offended about, then report it to the boss. It’s gotten bad enough that I refuse to to be alone in a room with them. I don’t have strong defenses against that sort of thing, and just like you should always have a lawyer with you when you talk to the cops, I have been doing all my interaction with them through a third party. It’s awkward, but this situation is very similar to the one that got me thrown out of my private highschool, and I do learn from my mistakes.

Anyway, don’t really need advice for the situation. I’ve already submitted a human resources complaint of hostile work environment. Coworker is probably going to have to go through some sort of sensitivity training. So am I, likely. We’ll see what happens.

Good luck! Sounds like you’ve already been through crap, and have made good use of it. Good for you!!

(Some might say “making crap in your life useful as fertilizer for your future.” 😊👍)

I’ve gotta argue non-engagement. Actually confronting the people in my family who have given me and my wife grief finally forced them back. Non-engagement works up to a point, but telling them to knock it off and forcing them to back down is also effective.

I think that tactic depends to some extent on how awful they are… the in-laws are written as so awful that it takes a dragon-slaying knight to (temporarily) defeat them.

Been there done that. It was the only way I COULD do the “non-engagement”, without them continuing to hunt me down. Now they know to let me keep my distance.😈

The point is that, with some people, it isn’t effective.

So if you’ve made the effort (like Larch and Tansy did) and it isn’t getting through to them, you don’t have to think “I need to keep this up because it’s bound to work eventually.” At some point you have to recognize that you aren’t going to win this tug-of-war. The only way out is to drop the rope.

I know all the characters in this strip have the shadow under the eyes, but with Gloriosa and Oleander it (along with their body language) makes them look extra deranged and mean respectably.

…seeing the first two juxtaposed makes me wonder if there’s an element of trauma in being autistic in a world that blames autistic people for any miscommunication between us and neurotypical people.

Because I have trouble picking up on subtext, but I also spend a lot of time (over?)analyzing what people say and how to respond. With the result that I either look back on the conversation after it’s over and start worrying that I misunderstood things or responded rudely; or else I sit there during the conversation piecing through possible responses for so long that I can’t keep up with the conversation. Or both! Usually both, let’s be honest.

I’m pretty sure there’s the same basic human vulnerability at the base of both situations. Abusers will deliberately play on it as a way of exploiting their victims, but it’s possible for someone (or lots of someones) to trip it by accident, too.