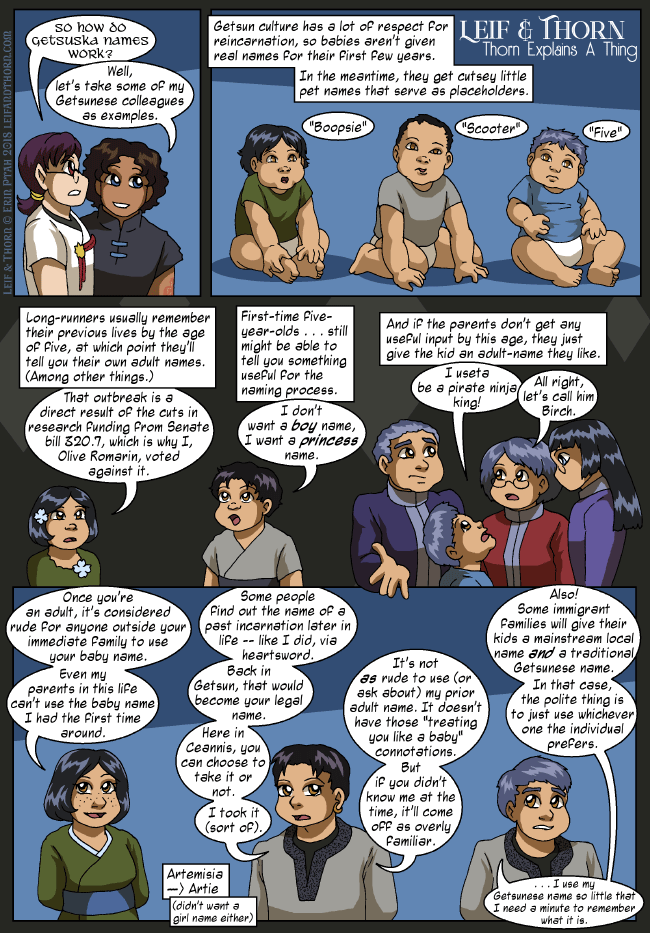 I drew this during the Leachtric storyline, when it was a liiiittle more on-point. (Getsunese major characters and reincarnation as a major theme!) But I’m tired of sitting on it until an equally on-point storyline comes around, so you’re just gonna get it now.

Leif: So how do Getsuska names work?

Thorn: Well, let’s take some of my Getsunese colleagues as examples.

Getsun culture has a lot of respect for reincarnation, so babies aren’t given real names for their first few years. In the meantime, they get cutsey little pet names that serve as placeholders.

Long-runners usually remember their previous lives by the age of five, at which point they’ll tell you their own adult names. (Among other things.)

Baby Olive: That outbreak is a direct result of the cuts in research funding from Senate bill 320.7, which is why I, Olive Romarin, voted against it.

First-time five-year-olds . . . still might be able to tell you something useful for the naming process.

Baby Artie: I don’t want a boy name, I want a princess name.

And if the parents don’t get any useful input by this age, they just give the kid an adult-name they like.

Baby Birch: I useta be a pirate ninja king!

Olive: Once you’re an adult, it’s considered rude for anyone outside your immediate family to use your baby name. Even my parents in this life can’t use the baby name I had the first time around.

Artie: Some people find out the name of a past incarnation later in life — like I did, via heartsword. Back in Getsun, that would become your legal name. Here in Ceannis, you can choose to take it or not. I took it (sort of).

It’s not as rude to use (or ask about) my prior adult name. It doesn’t have those “treating you like a baby” connotations. But if you didn’t know me at the time, it’ll come off as overly familiar.

Birch: Also! Some immigrant families will give their kids a mainstream local name and a traditional Getsunese name. In that case, the polite thing is to just use whichever one the individual prefers.

. . . I use my Getsunese name so little that I need a minute to remember what it is.

Are those eyes super common in Getsun?

Will we learn Birch’s Getsunese name?

Maybe! I haven’t worked out enough about the language to do a lot with it yet.

Cool, thanks for letting me know 😊. I hope you have time to work it out.

I’m curious which way it’ll go. More towards Chinese or Korean surnames with historical clan relevance (and overall fewer in total) or more like Japanese where 90% of all surnames are derived from location descriptions, translating literally into things like Birch-Island or Mountain-of-Birds?

I was wondering that too.

Yes. Both the shape and the color. Hair is also mostly shades of blue-to-black.

Awesome, thanks for answering, it’s a very interesting couple of details.

…so how long until Birch’s pirate ninja king past self becomes plot-relevant?

I would suspect at least one of those three were made up. I mean, neither pirates nor ninjas have kings.

And then we discover Birch really is the reincarnation of Lemuria F.C. Spiral, who mediated and ended a blood feud between two warring shinobi clans, quashed a surly band of pirates by beating their admiral in the traditional leadership challenge, and assembled these three groups into a fighting force (along with several others along the way) that allowed her to… Unite… the United islands.