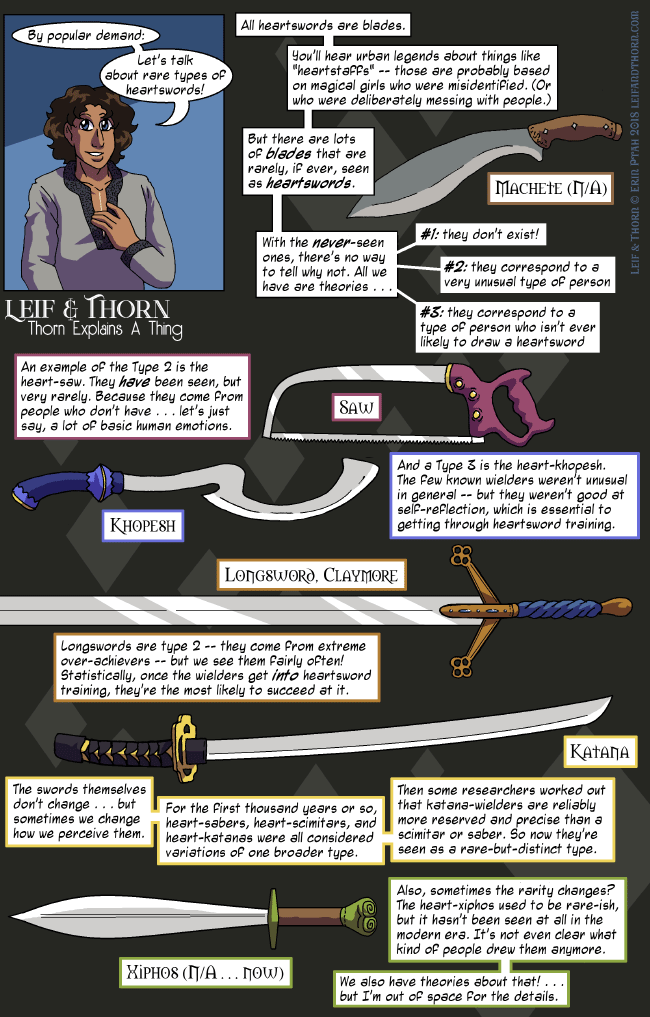 The long-awaited sequel to Thorn Explains: Heartswords, from April 2016!

You’ll hear urban legends about things like “heartstaffs” — those are probably based on magical girls who were misidentified. (Or who were deliberately messing with people.)

But there are lots of blades that are rarely, if ever, seen as heartswords.

With the never-seen ones, there’s no way to tell why not. All we have are theories . . .

#2: they correspond to a very unusual type of person

#3: they correspond to a type of person who isn’t ever likely to draw a heartsword

An example of the Type 2 is the heart-saw. They have been seen, but very rarely. Because they come from people who don’t have . . . let’s just say, a lot of basic human emotions.

And a Type 3 is the heart-khopesh. The few known wielders weren’t unusual in general — but they weren’t good at self-reflection, which is essential to getting through heartsword training.

Longswords are type 2 — they come from extreme over-achievers — but we see them fairly often! Statistically, once the wielders get into heartsword training, they’re the most likely to succeed at it.

The swords themselves don’t change . . . but sometimes we change how we perceive them.

For the first thousand years or so, heart-sabers, heart-scimitars, and heart-katanas were all considered variations of one broader type.

Then some researchers worked out that katana-wielders are reliably more reserved and precise than a scimitar or saber. So now they’re seen as a rare-but-distinct type.

Also, sometimes the rarity changes? The heart-xiphos used to be rare-ish, but it hasn’t been seen at all in the modern era. It’s not even clear what kind of people drew them anymore.

We also have theories about that! . . . but I’m out of space for the details.

For what it’s worth, bone saws can be used to cut things other than bones and other bits of people. It’s not necessarily recommended, but it can be done. So, yes, bone saws are subsets of saws.

Clean and sharpen that blade before you even *think* of using it surgically again, however.

This is REALLY making me want a heart sword quiz…

Me too! Although I’m pretty sure I’d have a scimitar.

Also my guess is a machete or similar would be someone who would rather hack away at a problem than think, kind of messy, forceful, possibly not good at listening to others… Basically every trait that makes you bad at wielding a heart sword. Machetes aren’t delicate tools and I doubt their users would be either.

That seems pretty reasonable. I would guess that the machete falls into type 3 as a result, because the people I’ve met like that tend to be very low on the self reflection scale. Not thinking makes it difficult to get through *any* training, as does their stubborn inclination to use BRUTE STRENGTH!

The only disagreement I have is about how skilled they’d be at using it. I feel like once they learned how to draw that thing, they’d get pretty good at using it pretty quickly, because now they have a tool to hack away at their problems that won’t break or dull.

But getting to that point? Won’t happen, unless Erin decides it’ll be fun to have a very special character.

Being poor at listening to others would make training hard as well, and is an extremely poor trait for a soldier, so they might well never make it into heartsword training. Someone who doesn’t listen to their superior officers won’t make it far at all in the military (or shouldn’t, at least).

How come the poll doesn’t let you add your own choice anymore? I don’t care about who wins the Kolpovision, so I can’t pick an answer. 😀

Btw I’ve noticed there’s been someone else posting here also as Anna, but with a small a, so unlike me it’s not capitalized. I wonder wheteher I should go back to Singer/sea.

Looks like it depends on the poll, the next one has it again, but not the previous one (and some that seem like they used to have it due to very specific answers).

Spot-on. It’s an individual setting I can adjust for each poll.

Wait … misidentified as in “the legend confused those two concepts”, or it is actually possible for someone to go through heartsword training and drawing a staff just to realize they actually failed the heartsword training but got a confusing magical girl transformation sequence?

Misidentified as in, “some observer saw a group of warriors draw their heartswords, except one who manifested a magical-girl staff, and the observer figured it was all the same thing and went on to tell people about the cool heartstaff they saw.”

You know, a quick bit of googling suggests that Machetes are related to things like scimitars or sabers, so it’s kinda unusual that one hasn’t been drawn before. Also, you could really expand your options and designs, given that there’s some crazy beaded weapons out there. Steel whips and kris, to name a few.

The whole personality determines the type of heartsword has a pretty profound effect on what types of swords get drawn, which takes out the machete. Not that it doesn’t exist in potentia, but… see the thread above about the likelyhood of a machete heartsword user getting through heartsword training. Basically, the machete user would probably need to figure it out on their own… but even by that path, they’re at a disadvantage over many other types of heartsword wielders.

Erin isn’t completely insane, so strives to keep the art within that which they can reasonably manage, so we don’t get to see many really exotic weapons. There would also need to be a mapping to what kind of personality would pull such exotic weapons, and that can be a bit tricky to feel through.

I put most of the cool design diversity into the hilts, not into the blade shapes. Human nature is pretty consistent — most individual personalities aren’t huge outliers from the common themes. Besides, if I gave too many cool rare blades to the main characters, they wouldn’t feel special anymore.

(Also, Some Ed is right — anything that’s too elaborate to draw in a reasonable timeframe probably isn’t showing up in my daily comic strip!)

So, what does this mean for weapons that are staff weapons, but are bladed? So to say, would this render impossible such things as a heartglaive?

Erin answered that on a comment in Part 1. “Glaives and scythes are possible, but represent rarer personality types, so you won’t see them as much.” I think that means they’re type 2?

Awesome, there’s Gurkha analogues in Leif and Thorn! Who do they fight for?

I’m going to post a guess about xiphos, and why they’re not seen anymore: they correspond to traits that are found in the heroes of classical mythology, but aren’t good for a solider to have (since heartsword training seems to be a military thing in modern Ceannis). Self-centered, maybe? Maybe personalities who are likely to be military leaders, but who wouldn’t actually fight on the front lines in a modern army (and thus don’t go through heartsword training).
Longswords and Claymores being overachievers…would that be because they’re weapons that are fairly difficult to make (larger swords would be more prone to bending/breaking due to leverage, and thus need better materials), and thus would appear as mundane weapons later in history?
Katanas may be in a similar situation as longswords/claymores, if less likely to go for heartsword training.
Granted, all of this is speculation, based on my admittedly amateur knowledge of the development of warfare.

I’d probably be a khopesh. I live very much in the now. 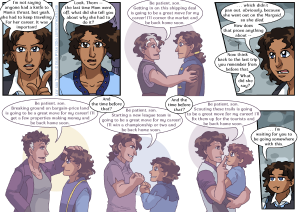