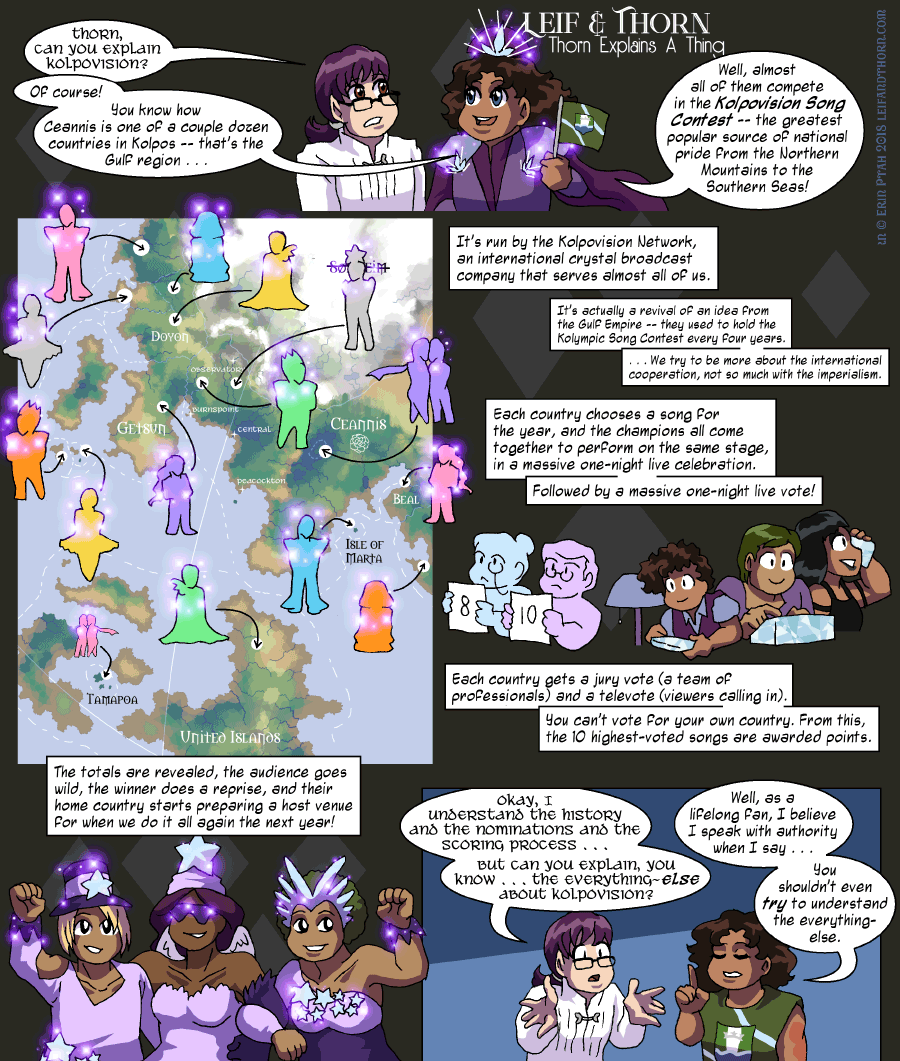 Leif: Thorn, can you explain Kolpovision?

Thorn: Of course! You know how Ceannis is one of a couple dozen countries in Kolpos — that’s the Gulf region . . .

Well, almost all of them compete in the Kolpovision Song Contest — the greatest popular source of national pride from the Northern Mountains to the Southern Seas!

Ceannis is the biggest country in the area, but there are a couple dozen others . . . And these days, almost all of them participate in the Kolpovision Song Contest.

It’s run by the Kolpovision Network, an international crystal broadcast company that serves almost all of us.

It’s actually a revival of an idea from the Gulf Empire — they used to hold the Kolympic Song Contest every four years.

. . . We try to be more about the international cooperation, not so much with the imperialism.

Each country gets a jury vote (a team of professionals) and a televote (viewers calling in). You can’t vote for your own country. From this, the 10 highest-voted songs are awarded points.

The totals are revealed, the audience goes wild, the winner does a reprise, and their home country starts preparing a host venue for when we do it all again the next year!

Leif: Okay, I understand the history and the nominations and the scoring process . . . But can you explain, you know . . . the everything-else about Kolpovision?

Thorn: Well, as a lifelong fan, I believe I speak with authority when I say . . . You shouldn’t even try to understand the everything-else.

Reminds me of when people ask why Philly fans are so violent.

I’ve been trying to understand the “everything else” of Eurovision for over twenty years.
I think you have to grow up with it.

I really hope, there is a country on the other side of the world, that competes as ‘special guest’ on a regular basis 😀
A guy in my country is making a national ESC soon. He invites foreign Singers who live here to compete for their original home country. Of course with all Saftey standards. But he understands clearly “everything else” 😀 He even talked Conchita Wurst (ESC Winner ’14) into moderating this event.