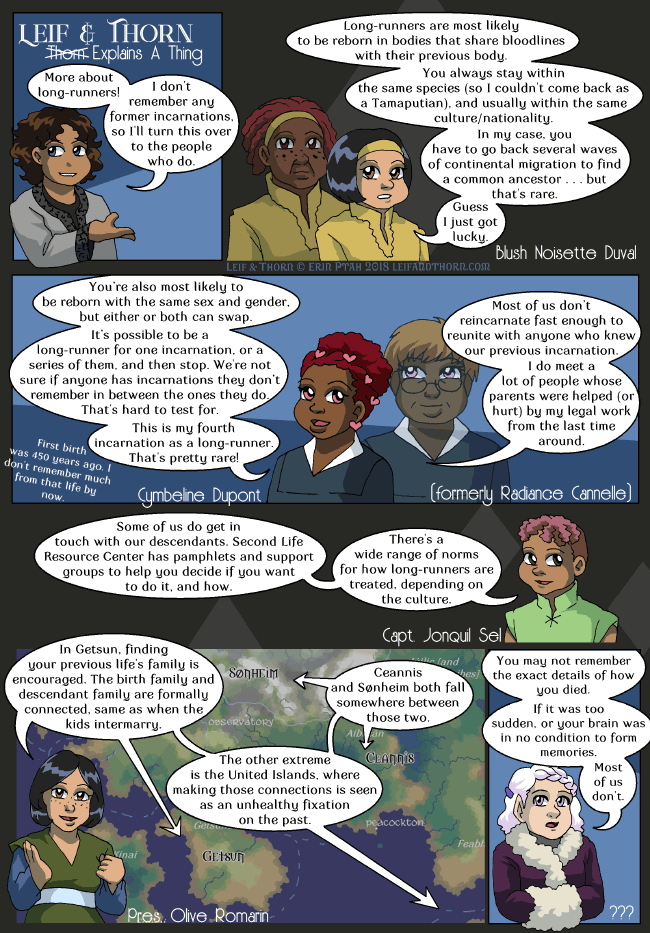 I’m taking a bit of a risk drawing the Little White-Haired Girl there. Likely as not, it’ll take 5 years to introduce her and I’ll have totally changed her design by then.

I ran a “should I redraw this original strip or nah?” poll, in September ’21, and agreed with the reader-favorite answer — so this image here is the updated version. Look for the original as a bonus feature in Leif & Thorn Volume 5! Slated to be funded on Kickstarter in 2022, then available on Gumroad for everyone to buy.

There's a minor character in an early Leif & Thorn strip that I'm bringing back later, but with a different design. Should I update the strip with their first appearance to have their final design, or no?
Total Votes: 71
Voting is closed

Thorn: More about long-runners! I don’t remember any former incarnations, so I’ll turn this over to the people who do.

Blush Noisette Duval: Long-runners are most likely to be reborn in bodies that share bloodlines with their previous body. You always stay within the same species (so I couldn’t come back as a Tamaputian), and usually within the same culture/nationality.

In my case, you have to go back several waves of continental migration to find a common ancestor . . . but that’s rare. Guess I just got lucky.

Cymbeline Dupont (formerly Radiance Cannelle) You’re also most likely to be reborn with the same sex and gender, but either or both can swap.

It’s possible to be a long-runner for one incarnation, or a series of them, and then stop. We’re not sure if anyone has incarnations they don’t remember in between the ones they do. That’s hard to test for. This is my fourth incarnation as a long-runner. That’s pretty rare!

First birth was 450 years ago. I don’t remember much from that life by now.

Most of us don’t reincarnate fast enough to reunite with anyone who knew our previous incarnation. I do meet a lot of people whose parents were helped (or hurt) by my legal work from the last time around.

Capt. Jonquil Sel: Some of us do get in touch with our descendants. Second Life Resource Center has pamphlets and support groups to help you decide if you want to do it, and how. There’s a wide range of norms for how long-runners are treated, depending on the culture.

Pres. Olive Romarin: In Getsun, finding your previous life’s family is encouraged. The birth family and descendant family are formally connected, same as when the kids intermarry. The other extreme is the United Islands, where making those connections is seen as an unhealthy fixation on the past. Ceannis and Sønheim both fall somewhere between those two.

???: You may not remember the exact details of how you died. If it was too sudden, or your brain was in no condition to form memories. Most of us don’t.

Ooh! Great timing. Did you drop a word in the third panel – “people ever *have* incarnations” ?

And as a non related question, what weapon a heartsword is is based on personality, does that come up at the start of training before drawing the weapon and seeing what it is? Eg, Agent D was scouted out as she’s an axe-wielder, was that an assumption based on personality or did someone see her draw the axe?

(I see you being a rock star over on the wiki =D It’s weird, a dozen people have registered and none of them are obvious spambots, but you’re the only one who’s added anything.)

Figuring out how to draw your heartsword requires a lot of self-knowledge, so the trainers get to know you very well before it happens, and can make pretty accurate predictions. Unless the person has a really thorough talent for hiding and faking their feelings. (Nobody guessed Marula was going to pull out a bone saw until the moment she did.)

When they’re scouting for the Secret Order of Monster Hunters, they’ll pull the prospective candidates early, so the public story can be “they couldn’t finish the training and quit.” That way nobody knows Del has a heartaxe except the people who have the security clearance to know she’s a secret agent in the first place.

Ooh! Lots of info in the comments today. Awesome.

Glad to help! Although I wouldn’t call collating all your awesome info pages rock star worthy, you’ve done the hard work in making such a great and detailed universe ^^
Speaking of, any policy/guidelines for images on the wiki you’re going for? I’ve been hearing to add them considering as the webcomic is image based there’s a lot of possibilities, also any new character ones won’t have the country of origin border thing.

I haven’t thought too much beyond that. Hm. Well, if you post a panel that’s cropped from a strip, have it link back to the original strip. If you’re posting a piece of art and it’s too big to fit gracefully in the article, then crop/resize it before uploading, and have that link back to the full-size original too. And give everything a short caption — it shows in the alt-text, not on the page, so it just needs to be a brief factual description for accessibility.

Is there any information you’d like to see in an article that isn’t on the to-do list yet?

Thanks for clearing that up! Always polite to source your art.

Any information? Well, I could definitely sit here all night and ask you questions, but most of them would be trivial [how’d Stanczia and Imri’s unicorns end up with such different tails to all the others we’ve seen? Very demonic tail compared to the usual long hair ones]. As a huge Fantasy fan I’d love an expansion on magic in general – They don’t use domains in the north, so do they divide spirits up at all? Do they even have spirits? Is spelltech broken up into categories? What’s the difference between a familiar and a soulbonded animal? But again, probably not very relevant.

In terms of any more actual pages… *checks notes* Clothing/fashion? Between the art of holiday outfits and the butch/casual/cute/dapper/femme fanciness scale that could be solid.
Heros/mythology/religion? Again, many holidays surrounding ancient figures, Ceannis used to worship some centuries ago, Sønheim named the planets after it’s deities.
In-strip locations? There’s a list of notable places on the countries page iirc, but giving places their own page is common on wikis. [Also, I love that the Embassy gates magically curl around people entering/leaving rather than being pulled open/closed]

Vampires have developed specialty breeds of unicorn with spines and pointy tails (also jet-black coats), because that’s what you do when you have hundreds of years in which you exercise your commitment to the #aesthetic.

I haven’t decided if polar spirits don’t exist, or if they’re just very reclusive. They don’t have domains, or any comparable spelltech categories.

A familiar is specifically the soulbonded animal of a magical girl, with some access to their magical power.

I’m thinking fashion can just be listed under country headers. Locations too, unless you come up with hundreds of words to say about the Embassy (or wherever). Legends, though, might rate their own page. (That word can encompass everything from the semi-historical to the out-and-out mythical.)

Ahh answers!! Awesome! Thanks so much 😀
Of course vampires put that much into #aesthetic haha I love it.

I was imagining an omnibus page for all locations, but it *would* be a stretch to write anything worthwhile for anywhere other than the embassy, so I’ll add expanding the locations list under countries to my to do list.

You are aware that ALL people on Earth share bloodline, that is have a common ancestor? (And not only one … if we get sufficiently back, everyone alive at that point is either ancestor of all current people or none. And “sufficiently” may be as little as few thousand years, definitely not more than hundred thousand.)

Also, if we go far enough back, we also all share a common bloodline with all mammals. Go back further, and there’s still more stuff. But if you go back too far, ‘bloodline’ is not the right word any longer.

Given how life originally started and stuff, I doubt that one could go back far enough to have common ancestry with everything. While the factors that enabled the start of life to be as prolific as it was have muted over the billion+ years, they haven’t vanished. I suspect there’s at least some viruses around that have no genetic relationship to most life. Though, that being said, there’s also, of course, viruses that pick up some genetic information from the beings its line has infected, since they’re little more than genes themselves. (Disclaimer: yes, I know that’s vague enough to be guaranteed wrong. But this isn’t a science forum, and the details absolutely do not pertain to this comic unless the author says they do.)

Disclaimer 2: Please don’t take my response above as contesting word of Erin, or even things the characters have said above. Just, take something to the extreme, and you can probably go farther than you would think.

Even if life in the Leif + Thorn world can be traced back to a single microorganism, the reincarnation process could be limited to much less than that limit. And even if it’s not really limited but just controlled by a ‘typically just back a few generations’, and the characters only know of a few exceptions that weren’t back that much farther, that doesn’t keep Erin from having someone who longruns to another species. For one potentially cute example: a person and their therapy pet long run and switch species. And reincarnate linked. I think this would preferably be done with a species of therapy pet that lives long enough for it to not be tragic.

Viruses and some exotic bacteria maybe, but I think you find common ancestor for everything with mitochondria, maybe even for all eukaryota.

Well, yeah. That’s why you *can* reincarnate as any race or nationality. But the closer the blood relationship, the more *likely* it is. About half of people reincarnate as a descendant of their previous incarnation’s grandparents.

The outer limit is “the common ancestor is so far back, and your populations have diverged so much, that you can no longer produce fertile offspring.”

That sounds clearer, thanks. (Another question would be if Blush Noisette Duval is aware of that.)

…. Did the design for little white haired girl change? Or is it just the ADHD….

Yeah, if you look in the transcription it is noted that Erin updated her image.