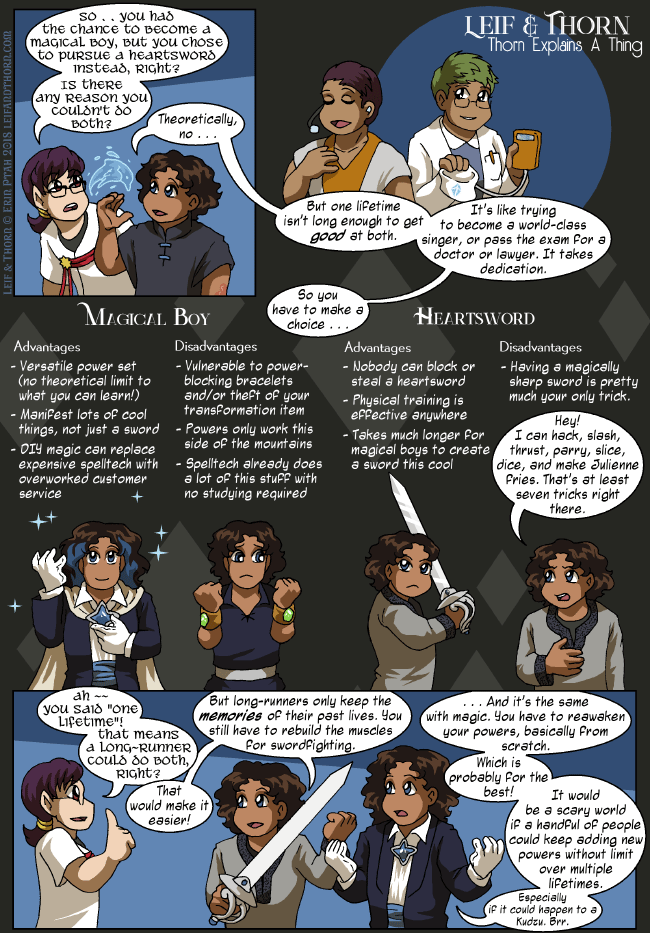 Leif: So . . you had the chance to become a magical boy, but you chose to pursue a heartsword instead, right? Is there any reason you couldn’t do both?

But one lifetime isn’t long enough to get good at both. It’s like trying to become a world-class singer, or pass the exam for a doctor or lawyer. It takes dedication. So you have to make a choice . . .

Magical Boy: Advantages
– Versatile power set (no theoretical limit to what you can learn!)
– Manifest lots of cool things, not just a sword
– DIY magic can replace expensive spelltech with overworked customer service

Magical Boy: Disadvantages
– Vulnerable to power-blocking bracelets, and/or theft of your transformation item
– Powers only work this side of the mountains
– Spelltech already does a lot of this stuff with no studying required

Heartsword: Advantages
– Nobody can block or steal a heartsword
– Physical training is effective anywhere
– Takes much longer for magical boys to create a sword this cool

Heartsword: Disadvantages
– Having a magically sharp sword is pretty much your only trick.

Leif: Ah — you said “one lifetime”! That means a long-runner could do both, right?

Thorn: That would make it easier! But long-runners only keep the memories of their past lives. You still have to rebuild the muscles for swordfighting.

Thorn (magical AU): . . . And it’s the same with magic. You have to reawaken your powers, basically from scratch.

Which is probably for the best! It would be a scary world if a handful of people could keep adding new powers without limit over multiple lifetimes. Especially if it could happen to a Kudzu. Brr.

Wait people can’t steal a heartsword? Juniper was holding onto D’s axe in Vampire Masquerade, is it a distance thing?

I think ‘steal’ in this sense is used as a comparison to having the Transformation Trinket stolen. If you get the Trinket stolen you have to have a Whole Adventure to get it back, with Wacky Secret Identity hi-jinks; whereas if your heartweapon is stolen you could probably Keyblade it back or something, or it just would go back into your soul if the thief got too far away with it.

At a guess, Heartblades can’t be taken against the user’s will, but can be given/surrendered. As far as ‘Keyblading’ it back, I think you still have to take possession in a mundane fashion again, or perhaps can dispel and resummon.

D was allowed to‘reassume’ her blade once off of Embassy property. and on the next page they walked her out with only swords drawn, as opposed to a sword at her throat to maintain compliance.

I would guess that she can deform it and draw it again, but drawing it is not so quick action to require sword at her throat. At least in case of axe … I wonder if the people with heart dagger could use it as throwing weapon by throwing directly from draw, then deform it and repeat.

Our Esteemed Author, Erin, has never actually answered if that’s a viable tactic, to my knowledge.

I don’t intend this as an attack on you, hkmaly, I’m just mentioning it here, and apologise in advance. “Deform” means ‘to distort, to change for the worse’. putting a heartweapon away should use a different word.

My guess would be the trick they can do to make the weapon not hurt other people would also make it impossible for someone else to hold the weapon. They probably also always know where it is. It could just deform and re-merge with the owner after an extended period of no contact or enough distance is reached.

Everyone else’s guesses have been really good! If there’s an emergency and you can’t re-sheathe your heartsword the usual way, you can dispel it. Someone else can hold your heartsword, but if they try to carry it away without your blessing, there’s a limit to how far they can get.

Yeah! I’m impressed at the discussion.
Thank you for confirming as well 🙂
Now I want to know if there’s a downside to dispelling over re-sheathing, haha. I’d assume so considering it hasn’t been shown, or it’s just heartsword safety or general use to re-sheathe. I love when worldbuilding makes me question and think about the interactions.

If you can lose your transformation item, just how many ADHD magical people are still looking for theirs? I can barely keep track of my phone. Actually, that’s not true. I can’t keep track of it at all. It’s been a week since I saw it.

Typically you just leave it in hammerspace, so it’s automatically right there when you reach for it.

It would be a scary world if a handful of people could keep adding new powers without limit over multiple lifetimes.