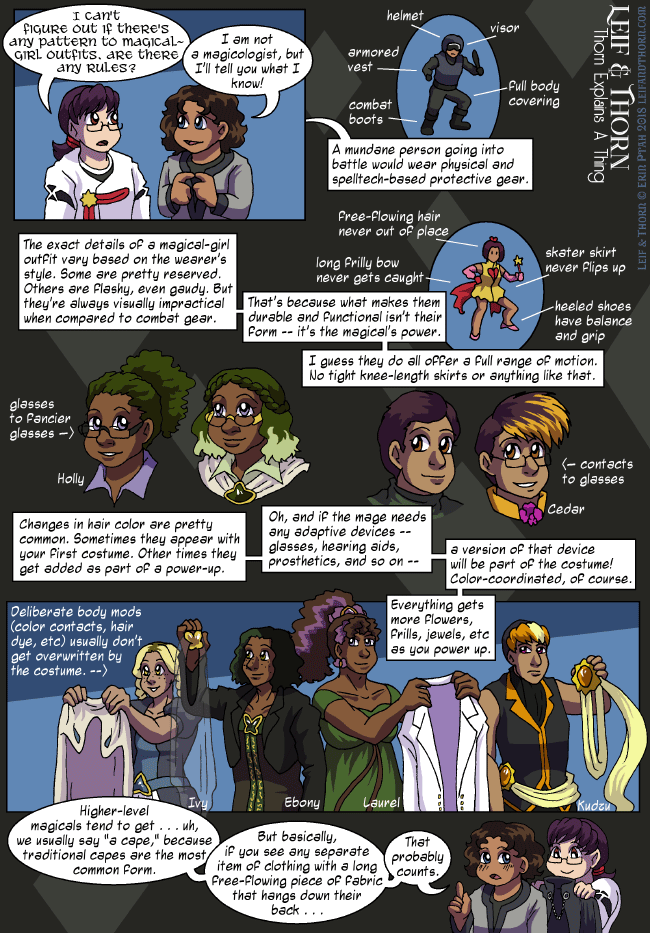 Doylist note: Most of the magical-girl outfits are influenced by different anime series, which suggest the characters’ personalities and foreshadow their plot arcs. Ivy and Ebony would fit right in as traditional Pretty Cures; Cedar is more of a mecha/Eva pilot; Cornoullier has a bit of Rayearth armor; and so on.

Anybody want to make some guesses about the rest…?

Leif: I can’t figure out if there’s any pattern to magical-girl outfits. Are there any rules?

Thorn: I am not a magicologist, but I’ll tell you what I know!

A mundane person going into battle would wear physical and spelltech-based protective gear.

The exact details of a magical-girl outfit vary based on the wearer’s style. Some are pretty reserved. Others are flashy, even gaudy. But they’re always visually impractical when compared to combat gear.

That’s because what makes them durable and functional isn’t their form — it’s the magical’s power.

I guess they do all offer a full range of motion. No tight knee-length skirts or anything like that.

Changes in hair color are pretty common. Sometimes they appear with your first costume. Other times they get added as part of a power-up.

Oh, and if the mage needs any adaptive devices — glasses, hearing aids, prosthetics, and so on — a version of that device will be part of the costume! Color-coordinated, of course.

Everything gets more flowers, frills, jewels, etc as you power up.

Higher-level magicals tend to get . . . uh, we usually say “a cape,” because traditional capes are the most common form. But basically, if you see any separate item of clothing with a long free-flowing piece of fabric that hangs down their back . . . That probably counts.

There’s a space missing in the fifth speech bubble: it’s “functionalisn’t” and should be “functional isn’t”. Same thing in the transcript.

Is there a written list anyone could direct me to that summarizes magical outfit types? I don’t think I’ve seen “Pretty Cures” anywhere besides comments here

This TVTropes article is a pretty good source:

Last I knew, Pretty Cure was the longest-running magical-girl franchise in Japan. But IMO the appeal is mostly to kids, there’s not much that’s deep enough to endure as the audience gets older, so it doesn’t make the lasting impact that a series like Sailor Moon has made.

Ohey this comic is on that page! Thank you :3

Cedar’s an EVA pilot? That sounds bad (but it also explains his parents’ issues)

Yeah, I worry for him.

Magical question – is there a time limit or similar thing that keeps magicals from being transformed 24/7 (or the equivalent in this world, I think it was like, 26/27 hours??), or is it like a super saiyan thing where with enough work the only stamina drain comes from using up magic power and you can just stay transformed if you want?

IIRC, from a social perspective, being transformed 26/7 is a dicey proposition, as it’s akin to having a sword drawn, or a gun ready to fire. You’re obviously armed, and that can make people nervous. Thorn dealt with that at the gym, and that was just from having a Heartsword scar.

While it can make people nervous, magic is useful for other things than just fight. But … I guess people would be nervous around person with big hammer even if that hammer was obviously meant as tool for construction and not weapon. Because it CAN be used as a weapon …

Along with what Khyrin said, while there’s no absolute time limit on a transformation, they do take stamina to maintain. A magical girl will almost always power-down if she’s exhausted, unconscious, or severely wounded. (Definitely always if she dies.) It’s safer and more effective to only power up when you need to.

Plus, the costumes do get sweaty/dirty/damaged over time! If nothing else, you’d have to re-transform in order to reset them.

(Imagined knee-length skirt which get tighter when the magical girl stands and looser when she kicks or run … waaait, you probably can do that even without magic.)

I suppose that the magical girl costume also warms whole body comfortably in winter and cools it in summer, despite the legs not being covered and the multiple layers and frills looking uncomfortably warm. And heavy, which likely also isn’t problem.

… good point with the high heels. Those would be very impractical without magic compensating, even if most magical girls can fly. (Can they? I mean, we saw several magical girls flying, but how common/hard that is?)

Hmm, how many have I actually shown flying so far?