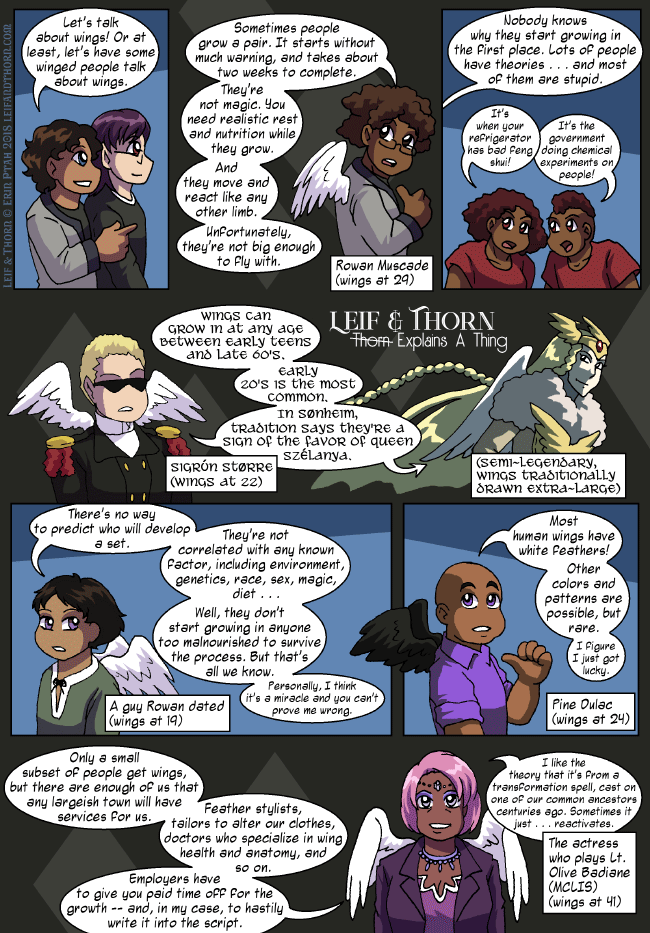 Rowan Muscade (wings at 29): Sometimes people grow a pair. It starts without much warning, and takes about two weeks to complete.

They’re not magic. You need realistic rest and nutrition while they grow. And they move and react like any other limb. Unfortunately, they’re not big enough to fly with.

Nobody knows why they start growing in the first place. Lots of people have theories . . . and most of them are stupid.

Rosie: It’s when your refrigerator has bad feng shui!

Sigrún Større (wings at 22): Wings can grow in at any age between early teens and late 60’s. Early 20’s is the most common. In Sønheim, tradition says they’re a sign of the favor of Queen Szélanya.

A guy Rowan dated (wings at 19): There’s no way to predict who will develop a set. They’re not correlated with any known factor, including environment, genetics, race, sex, magic, diet . . . Well, they don’t start growing in anyone too malnourished to survive the process. But that’s all we know.

Personally, I think it’s a miracle and you can’t prove me wrong.

Pine Dulac (wings at 24): Most human wings have white feathers! Other colors and patterns are possible, but rare. I figure I just got lucky.

The actress who plays Lt. Olive Badiane (MCLIS) (wings at 41): Only a small subset of people get wings, but there are enough of us that any largeish town will have services for us. Feather stylists, tailors to alter our clothes, doctors who specialize in wing health and anatomy, and so on.

Employers have to give you paid time off for the growth — and, in my case, to hastily write it into the script.

I like the theory that it’s from a transformation spell, cast on one of our common ancestors centuries ago. Sometimes it just . . . reactivates.

Are wings really THAT special in how they need to be treated medically? Like, there are probably specific tips how to care about feathers, but that’s not really medical stuff.

Well, I know in birds a broken wing is far far different than a human broken bone. There’s huge differences in structure, circulation, and nourishment. So, if human wings are the same as birds, I would imagine some HUGE unique challenges in the way they are incorporated into the rest of a very HUMAN system. And, if they are more similar to human systems (more solid bone structure, etc) then it has got to be very different than bird wings. I would guess no crossover care would be GREAT, although maybe could help in a pinch. Also, yeah, I think wings WOULD be “that special”, medically speaking. Of course, only Erin knows. 😉

I’d love to hear more about the differences! I know about the hollow bones, but not the rest of it, or how it would affect medical treatment.

(No current plot ideas that hinge on knowing this, but who knows, the details might inspire one.)

I work with (volunteer with ;-)) a lot of naturalists and occasionally rangers. What I put out is what I’ve “gleaned” from working with them. So I did some quick research – turns out, the differences and challenges may have more to do with the fact that all of the birds around here FLY. I say this because as I’ve looked into the differences, I learned that the bones of birds are not actually ALL hollow. Apparently, the less a bird flys, the less the bones are adapted for flight (kinda a “duh” moment for me, but I’d never thought about it.) So, since no-one seems to plan on using the wings to FLY in your universe, I guess there may not need be much challenge at all! (Is it silly that I’m kinda dissapointed?)
🙂

(Disclaimer – this was SUPER QUICK research on my part! Anyone knows better, PLEASE “school me”. Lol!)

I agree with Keep on keepin’ on: If we’re assuming these wings have none of the birds’ adaptions specifically for flight, I can’t think of or find reference to much that’d be relevant here.
That the radius and ulna of the wings produce red blood cells is the closest one I’ve got ATM.

It depends — there are a lot of potentially-wing-affecting conditions that aren’t shared between birds and humans (different diseases, different vitamin deficiencies). And you definitely wouldn’t take an injured human to the nearest bird vet as your first choice. But if you’re snowed in overnight and you break a wing and there’s a vet in the house, they’d know the right way to set it.

I see you, poe

Yeah, having 15 and a half pounds of bone, ligament, and muscle push it’s way through your back in screaming agony so that even obligate cannibals can enjoy buffalo style wings is soooo fortunate.

Soooo … most human wings have feathers naturally white. How often will people color them? Can’t be that hard, can it?

Now I’m imagining someone color their wings in black light so it shows up in a rave.

Most important; Erin, is there ACTUALLY a reason, or do you draw them because you want to? 😉

Is there a reason? Yes! Will it ever be relevant to the plot? Very likely not.

What all colors can wings come in?

Cool, oh can there be blue one’s? That sounds awesome.

Erin, do you have an our-world analogue in mind for sudden appearance of wings? Not asking for spoilers here. I was diagnosed with a chronic illness that manifested when I was 20 and this rings for me, so I’m curious for personal reasons.

I guess, if anything, it’s the fantasy opposite of amputation — instead of having fewer limbs and figuring out how to cope with that, now you have more limbs. There’s some overlap in the details of the adjustment process, like the need to alter or replace clothes that no longer fit.

It’s not a great analogue for any real-world disability or chronic illness, but it does fall into the same broader category of “sudden change to your body, which affects how you approach everything from then on, because you always have to factor it in.” So if it’s resonating with you on that count, I’m doing something right!

And I get to carry on with my fantasy of living in Ceannis, so I’m cool with that. 🙂

For a society that’s so accepting of dysphoria of other kinds, I gotta wonder, what about wing dysmorphia? There’s documented cases of people having dysmorphia bad enough that they self amputate a part that just wasn’t part of the mental map of their body, and growing two new limbs is a pretty major change, way more than just an amputee in reverse.

Most winged people seem adjusted to the new state, but it makes me curious of how things go if the process doesn’t activate as intended

What if only the mental map gets adjusted, giving a patient phantom limbs and growth cravings leaving them desperately searching for a way to trigger the rest of the change? Would prosthetics help, would they be seen as gauche?

What if just the physical changes trigger? Think about all that new sensory input, air currents on the feathers, proprioception of how the new muscles lie, that’s a pretty tall order, plenty of people suffer from some form of tactile dysphoria or dysmorphia triggered every time signals from a bad place arrive in the brain. It’s not hard to imagine someone neglecting or even binding the wings to unhealthily suppress the senses, while struggling to find a surgeon who is willing to remove ‘perfectly healthy’ limbs.

And that’s not covering all the possible versions of trauma to a normal winged person.

…These are very good questions, and I wish I had a character lined up to experience some of them!

The cultural perception of wings is going to vary a lot country-to-country. In Sønheim they’re considered a sign of fortune and favor, so any discomfort is going to be treated as “this is a small price to pay for all the luck you just got.” It’s not impossible to get them removed, but someone who did would probably try to keep people from finding out.

In Ceannis the approach is more “if you give yourself some time to adjust and it still isn’t clicking, we’ll treat it like gender-related dysphoria and do surgery as necessary.” (Once they grow in, they’re just regular limbs, where damage is permanent and they won’t reappear if removed.)

Aaaand there are probably places where wings are seen as unlucky, and either hidden or routinely amputated at the first opportunity.